In the hours following the announcement of the grand jury’s decision on Monday night to not indict Darren Wilson, the Ferguson cop who shot and killed unarmed black teen Michael Brown, news outlets focused on the destruction and looting overtaking the Missouri town.

But while "Ferguson on Fire" and "Jury Fury" dominated headlines, reactions to the decision were hardly all violence and chaos.

Across the country, activists took to heart the urgings of President Obama and Brown’s grieving parents to react to the decision with calm.

"I join Michael's parents in asking anyone who protests this decision to do so peacefully," Obama said on Monday. "Let me repeat Michael's father's words: 'Hurting others or destroying property is not the answer. No matter what the grand jury decides, I do not want my son's death to be in vain.'"

Thousands of supporters paid heed and partook in peaceful protests, marches, prayers and moments of silence as a call for justice for the slain 18-year-old.

About 100 protesters mobilized at the White House on Monday evening to join hands and sing, "We Shall Overcome." Smaller groups also chanted, "The people, united, will never be divided!" and stood in silence for four-and-a-half minutes, paying heed to Michael Brown’s parents’ request.

"On CNN and all the other networks, they're gonna show people burning things or flipping over a car," Jevon Myles, a 27-year-old computer programmer, told Bloomberg. "But they're gonna cover that before they cover anything like this. Peaceful."

A post shared by Photographer JefryAndresWright (@jefryandreswright) on Nov 25, 2014 at 9:17am PST

The growing group marched through the streets of Washington, D.C., snaking through Union Station, the Capitol and finally up the steps of the Supreme Court.

"Obama says, 'I support Trayvon Martin's parents, I support Michael Brown's parents,'" one speaker announced into a microphone, according to Bloomberg. "He should support us. He sent us a cease and desist. He should say, 'This is wrong!'"

A crowd of protesters congregated at Temple University on Tuesday and marched through north Philadelphia. Supporters held signs reading, "We Are Michael Brown" and "Black Lives Matter," and chanted, "No Justice, no peace, no racist police."

One supporter Anjana Rajan told The Huffington Post that it was "super, super peaceful, just songs and drums and marching."

About 100 Ohio State University students gathered to react to Monday's decision with a prayer vigil, praying for the town's safety and security, the Columbus Dispatch reported.

About 75 to 100 people gathered in Boston on Monday night to march from City Hall to the State House, chanting "Justice for Mike Brown." The group dispersed at around 1 a.m., according to CBS.

"We did the 'die-in' for four and a half minutes to represent the four and a half hours they let Michael Brown lay in the street dead, unattended," protest organizer Angie Brilliance, who planned a die-in in front of the Metro Police headquarters told NBC4.

Students at Duke University partook in a prayer circle on Monday night and then proceeded to march across campus, according to the Duke Chronicle.

"It was really a spirit of the moment," Ciera Echols, a senior who organized the event, told the paper. "People say you can’t make a difference marching, but just coming together expressing ourselves -- it was just really beautiful to see everyone come out tonight."

Community leaders helped organize a calm protest in downtown Portland, Oregon, at the Justice Center on Monday night, where supporters chanted "No Justice, No Peace," according to KATU.

"The situation in Ferguson did not occur in a vacuum," Mayor Charlie Hales said in a statement. "All of our community is hurting today. And, together, all of our community must begin healing. We, as a society, have a lot of work to do addressing the systemic inequities history has left us."

Other groups walked across the Robert F. Kennedy Bridge, which connects Manhattan, Queens and the Bronx, and eventually crossed back into Harlem early Tuesday, according to NBC New York.

Students at Virginia Commonwealth University chanted and marched through the heart of Richmond on Broad Street after the grand jury handed down its decision on Monday evening, according to CBS 6. After holding a moment of silence for the teen, the students sang "Amazing Grace."

In St. Petersburg, protesters including a number of families, walked around in a circle shouting slogans such as "No justice. No peace," the Tampa Bay Times reported.

Rep. Darryl Rouson summed up the mood by telling the news outlet:

"I think people have the right to protest. There's a lot of disappointment and frustration across the country and they are just expressing frustration and disappointment. There are appropriate ways to do it and I'm glad that the community is not seething."

Amid the unrest, the people of Ferguson came together to help their fellow townspeople in this time of need.

Hundreds of citizens, from college students to local nuns, joined the effort to repair their town, proving that through all the chaos, they can still maintain their sense of community.

Just met @bellecamino . She & her kids decided to come out help clean up the streets along Grand. @ksdknews pic.twitter.com/mDr34fpFR1

WE ARE OPEN! Teachers and volunteers are here 9am-3pm to help kids who can't go to school today. Library open 9-4, presuming it stays safe.

With local schools canceled following the grand jury decision, the Ferguson Public Library stayed open and provided lunch for students. The Internet responded by sending the library a "staggering" amount in donations, Talking Points Memo reported. As early as Tuesday afternoon, the library said about 1,200 people had send donations through PayPal.

These Peaceful Responses To The Ferguson Decision Show The U.S. At Its Best
Peaceful Protests Around the Country 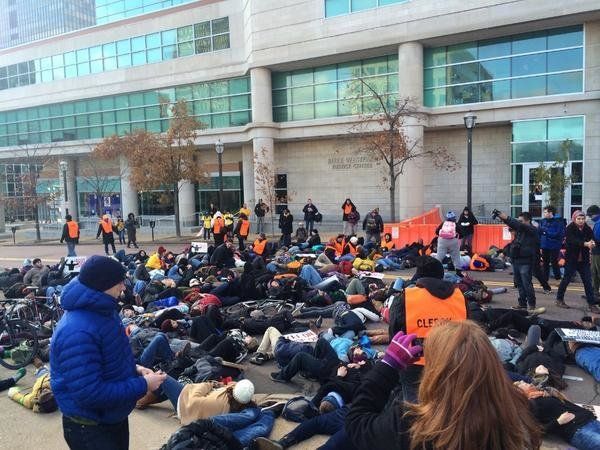