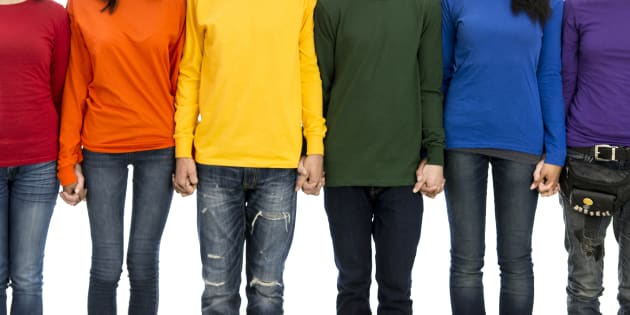 As Alberta's politicians debate a bill to ensure students who join gay-straight alliances at school aren't outed to their parents, people are taking to Twitter to show their support for alliances and express outrage that anyone would oppose such "life-saving" legislation.

My son attending a GSA probably saved his life. Husband and I couldn't/wouldn't/weren't supportive. (To our sorrow...) Today, son isn't going back in the closet and neither are we!!!
GSAs save lives. Our family is proof. #Bill24#ableg#abed

GSAs save lives. Anyone opposed is putting vulnerable youth at risk of bullying, self-harm, & suicide. #abed#ableghttps://t.co/8sU2L4eU0T

Hey @jkenney, note the 40% of LGBT youth that are homeless due to family rejection.

So many years ago I decided who was part of my coming out journey and I intend to use my vote and my voice in 2019 to ensure that every LGBTQ kid in Alberta gets to decide who is part of their coming out story. 👫👬👭 #ableg#abpoli#UCP#bill24#cdnpoli#loveislove

Alberta Education Minister David Eggen tabled Bill 24: An Act To Support Gay-Straight Alliances Nov. 2. The bill would require that all publicly-funded schools in the province have a clear policy allowing gay-straight alliances (GSAs), ensure that principals help create GSAs "in a timely manner" if students want one, and protect the privacy of anyone who joins such a club, according to the government's announcement.

"Our top priority is for all schools across Alberta to be safe and welcoming for all students, regardless of their sexual orientation, gender identity or gender expression," Eggen said in a statement.

The United Conservative Party opposed the proposed legislation, with leader Jason Kenney saying the party supports GSAs, but it should be up to teachers to determine whether parents should be informed that their child joined one.

My statement on Bill 24. We believe educators know better than politicians how to protect the best interests of kids https://t.co/YazWEHIeoX

"Parents have a right to know what's going on with their kids in the schools unless the parents are abusive," Kenney told a Postmedia editorial board.

That sentiment didn't sit well with GSA supporters, teachers, parents, and members of the LGBTQ community. Canadian indie pop band (and Albertans) Tegan and Sara have even chimed in.

We are big supporters of #Bill24 Students should never be outed, GSA's should be protected and school should feel like caring and inclusive spaces. 🌈🙏❤️⚡️💥🙌 https://t.co/U6uXt7ObPJ

#Bill24 is important because 1) as a teacher I have a law to protect my students privacy and my job & 2) as a gay man I would have been mortified if someone told people I was gay when I hadn't come to terms with it myself. #ableg

1/ When I was 16 I joined a #GSA for the first time. I wasn't struggling with my sexuality, and my family was warm and supportive, but it was an eye opener for me. I remember A, who had been kicked out of his house for being gay and was now homeless. #ableg

My child comes home from @OutloudA and I ask her how it went. She replies "I felt like I was home, I felt like I belong".

Imagine a kid with unsupportive parents missing out on that incredibly important connection a GSA could offer for fear of being outed.#Bill24#abed#ableg

There are currently 37 gay-straight alliances listed in the Alberta GSA Network, a collective of resources specific to Alberta kindergarten to Grade 12 students, teachers, and school staff, according to their website.

A handful of rallies to support GSAs are scheduled to take place Nov. 12, including one in Calgary and one in Lethbridge.

We'll be there in Calgary! Rally planned in Lethbridge too. #abed#ableg#OKwithGSAhttps://t.co/P1gnTdEv9x

This article exists as part of the online archive for HuffPost Canada. Certain site features have been disabled. If you have questions or concerns, please check our FAQ or contact support@huffpost.com.