Conservative Senator Patrick Brazeau has been kicked out of the Tory caucus.

“In light of the serious nature of the events reported today, Senator Brazeau has been removed from the Conservative Caucus. As this is a legal matter, I cannot comment further,” said Marjory LeBreton, the Government Leader in the Senate.

Prime Minister Stephen Harper confirmed in the House of Commons that Brazeau had been removed for matters of a "personal" nature.

According to Gatineau police, Brazeau is in custody following a 911 call alleging domestic violence. The 38-year-old senator is being kept in custody pending a possible court appearance Friday morning. Const. Pierre Lanthier told The Huffington Post Canada, adding that Brazeau has "yet to be charged by police."

Meanwhile, his Ottawa home has been turned into a crime scene, surrounded by police cruisers and red tape, and likely to be searched, reports CBC News. 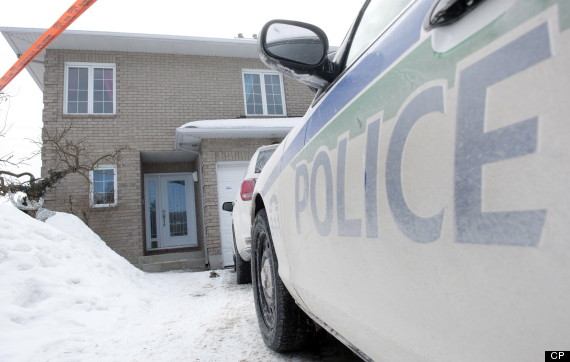 A police cruiser sits outside the house of Sen. Patrick Brazeau in Gatineau, Que., Thursday, Feb.7, 2013. THE CANADIAN PRESS/Adrian Wyld

Brazeau will continue to sit as a senator and draw his $132,300 salary. He won't be allowed to sit as a Conservative Party member or attend caucus meetings.

The 38-year-old senator was appointed to the Senate by Harper in December 2008.

The prime minister said Brazeau was removed from caucus over "personal" matters, not Senate business, but added, "they are very serious and we expect they will be dealt with in the courts," during Wednesday's afternoon session of question period.

Brazeau is among the senators who have come under scrutiny recently for claiming to live outside of Ottawa and collecting a generous housing allowance. He was embroiled in controversy early after his appointment when it emerged he intended to continue to sit as the national chief of the Congress of Aboriginal Peoples and draw two six-figure salaries. He stepped down from the post.

A senator can lose his or her position by the Senate itself meeting and making a decision to remove the senator, either because of bankruptcy, because of a criminal offence that they were found guilty of, or because they don't meet the property and residential requirement. Senators can also be disqualified if they fail to give their attendance during two consecutive sessions of Parliament or if they pledge their allegiance to a foreign power.

More from The Canadian Press

OTTAWA — Controversial Conservative senator Patrick Brazeau was turfed from his party's caucus and believed to be behind bars Thursday after a 911 call summoned police to his home to investigate a complaint of domestic violence.

Brazeau, long a prominent and polarizing figure both within Canada's aboriginal community and beyond, was swiftly removed from the Conservative caucus after police arrived at his home in Gatineau, Que., around 9 a.m.

About three hours later — with Brazeau believed to be in custody, a red police tape cordon around his house and a cruiser parked in the driveway — a letter was circulated among caucus that he was no longer a member.

"It's known that in light of the serious events that have been reported today, I have removed Sen. Brazeau from the Conservative caucus,'' Prime Minister Stephen Harper told the Commons.

"Our understanding is that these are matters of a personal nature rather than Senate business, but they are very serious and we expect they will be dealt with through the courts.''

House Leader Peter Van Loan later confirmed in the House that Brazeau's departure was directly linked to reports of a domestic incident.

Brazeau, however, has been a thorn in the Conservative caucus' side for months, most recently over allegations that he was using other people's addresses in order to qualify for a Senate housing allowance and an aboriginal tax exemption.

Police described Brazeau's house as a crime scene, although they refused to confirm it was indeed the senator who was in custody, saying only that a man was arrested at the Gatineau address after a call to 911.

By the dinner hour Thursday, no charges had been formally laid. Police said they would keep the suspect in custody pending a possible court appearance Friday morning.

"There's no charge right now at the moment, but we will continue our investigation,'' said Gatineau police spokesman Pierre Lanthier.

Lanthier would not comment on the condition of the victim.

Brazeau's office said Thursday that he would remain in the Senate as independent.

Were he to face charges, Brazeau would be placed on leave from the Senate, and though he could still attend sessions, his access to benefits would be curtailed. He would only be suspended if convicted of an indictable offence.

NDP Leader Tom Mulcair said he hoped the Senate scrutinizes those rules if it ever comes time to apply them.

"It's one thing, his removal from the Tory caucus, but he's still in the Senate so up until his retirement age, if he stays in the Senate, he will cost Canadians $7 million,'' Mulcair said after a speech to the Montreal Council on Foreign Relations.

"I think that the reasons for that exclusion have to be analyzed properly under the rules of the Senate.''

Calls for Brazeau's removal from the Senate began almost from the day he was appointed by Harper in 2008.

He was 34 when called to the red chamber, making him the third-youngest appointee in its history. Critics howled over his access to a salary of about $132,000 a year and a generous pension plan.

Brazeau joined the Senate while he was still national chief of the Congress of Aboriginal Peoples.

He eventually resigned from CAP in January 2009 after news broke that a CAP employee had filed a sexual harassment complaint against him with Ontario's human rights tribunal.

He was also linked to allegations of CAP misspending of federal funds that were supposed to pay for aboriginal health programs. Conservatives argued, at the time, that the misspending happened before Brazeau took over as congress chief.

A member of the Kitigan Zibi Anishinabeg First Nation in Quebec, Brazeau was viewed by some as doing more harm than good to the state of federal-aboriginal relations from his position as a senator.

He has long been an outspoken advocate for greater transparency on reserves and reform of First Nations governance, often using Twitter — his handle is @TheBrazman — to describe his controversial and divisive perspective.

Brazeau was also dismissive of the wave of First Nations protests that spread through the country in January under the Idle No More banner. Members of his own band denounced his views.

"The on-going and more recent ridicule that Senator Brazeau has made of Chief Teresa Spence, as well as the Idle No More Movement among other tirades has confirmed Senator Brazeau's reformist views and total lack of understanding of the challenges facing First Nations,'' Chief Gilbert W. Whiteduck said in a news release earlier this week.

"Rather than acting responsibly, Senator Brazeau has been and continues to act in a rogue manner.''

Over the years, reports have surfaced repeatedly of Brazeau being in arrears on child support payments.

He made the biggest headlines last March when he fought a charity boxing match against Liberal MP Justin Trudeau, now front-runner for the federal Liberal leadership.

Although bigger, heavier and allegedly more experienced in boxing than Trudeau, Brazeau — a former member of the Canadian Forces and a black belt in karate — lost the match.

"There would appear to be some very real human issues at play here,'' said Goodale, who also expressed the hope that no one had been injured.

Asked about kicking Brazeau from the Conservative caucus, even before charges were laid, Goodale immediately responded: "They had no choice.''

"Obviously his remaining in the caucus at that point was untenable.''

"Judged from the perspective we have, it seems to be an appropriate response. The question is, where to go from here.''.

With files from Althia Raj in Ottawa

Suggest a correction
More:
Brazeau domesticBrazeau senatepatrick brazeauPatrick Brazeau AssaultPatrick Brazeau booted
This article exists as part of the online archive for HuffPost Canada. Certain site features have been disabled. If you have questions or concerns, please check our FAQ or contact support@huffpost.com.