Terms |
Privacy Policy
Part of HuffPost News. ©2022 BuzzFeed, Inc. All rights reserved.
This article exists as part of the online archive for HuffPost Canada, which closed in 2021. 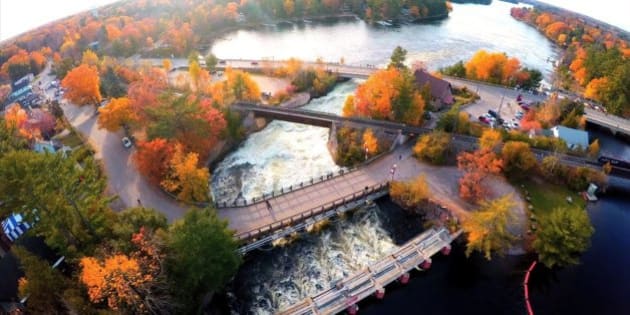 As a child fascinated with animals, the Muskoka Lakes region of Ontario was magical. It was the place I visited every summer to catch frogs and turtles--beautiful tea-coloured lakes, home to monster-sized pike and trout that captured my imagination. My parents would take me to Bala, the town we most often visited, so I could peruse the bait shop to look for interesting minnows sold as bait and eat ice cream. I swam in the lakes, scoured the fields for snakes, and played in the Bala Falls.

The town of Bala was built around the Bala Falls--a site of historic significance and stunning natural beauty. When I found myself walking through Bala with a friend in the summer of 2014, it was only natural that we ended up there. The scene was much as I remembered it--children splashing into the water; couples stopping to admire the view; and at the heart of it all, the glittering arc of the falls--but there was a difference: a permanent-looking campsite set up on the Bala Falls portage.

My friend and I were welcomed by Peggy Peterson, a resident of Huntsville, Ontario. Peggy had been camped out for 18 days to protest the construction of a hydroelectric plant at the falls by a private company called Swift River Energy Limited. She told us that the community of Bala had been fighting the development for the past decade but hadn't been able to stop it from moving forward; that the proposed plant would be devastating for the town itself, driving away tourists and harming businesses; and that the project threatened the Muskoka Lakes ecosystem, part of one of the greatest freshwater resources in the world.

I was floored, and immediately knew I had to do something to help. We drove back to Toronto, picked up some cameras and returned to Bala to get some answers.

After a few days of filming, I contacted Jonah Bryson, an ambitious 15-year-old film director who had gotten in touch with me in 2013. I asked him to come and shoot with us, and upon seeing his passion, eventually to co-direct the film with me. It's the youths' future that's at stake after all.

The Bala Falls site was awarded to Swift River as part of a green energy initiative by the Ontario government that awards Crown Land to private corporations to develop hydroelectric facilities. The project was wildly unpopular with the people of Bala from day one. Recent studies found that 85 per cent of individual residents and 41 of 45 local businesses oppose the proposed plant.

If rolling blackouts were a fact of life in Ontario, replacing the town's main tourist attraction with a power plant might be defensible. But the province usually meets its energy demands, often producing a surplus of electricity it's then forced to sell to buyers in the United States at a loss. The Ontario government has committed to purchasing all of the power generated by the plant, whether it is needed or not, at a price far above that of other generating stations. This means the Ontario taxpayer is on the hook to cover this loss. The plant will also produce the greatest amount of power in the spring and fall, when it is needed the least.

Residents and many opposing the plant believe the government has failed to properly assess the environmental impact of the project and ignored the community's safety concerns for tourists, swimmers, boaters and fishermen. The Bala Falls are the main tributary connecting water from the Algonquin and Muskoka Lakes watershed to Georgian Bay, Lake Huron and eventually the ocean. Turbines are tough to navigate for fish and other aquatic life looking to migrate, often acting like a giant blender. How many fish will be killed is unknown, but I have a serious problem with privatizing that flow of water, and I think everyone in North America should as well.

Water movement and privatization is a growing global concern. The battle for clean, drinkable water is becoming humanity's next massive resource struggle, and this project hands the keys to one of the greatest freshwater ecosystems in the world to a private corporation in an era of climate and environmental changes. Almost all the water from the Muskoka Lakes would run through Swift River's turbine at their discretion--and we would pay them royally for that privilege. The government subsidy for it would add to the $50 billion overpayment revealed in the December 2014 Ontario Auditor General's report. If taxpayers knew, they would be furious.

The proposed Bala Falls hydroelectric plant is more than a misstep; it is an economic, environmental and moral injustice. It is a democratic farce when an overwhelming majority oppose a project, yet get told, "It's a done deal." It is the government's duty to consult with the Wahta Mohawks, who have publicly challenged the government to abide by its own laws, yet they continue to be disrespected.

The problem is complex, because it appears superficially to be "green energy." But real green energy doesn't fly in the face of democracy, shouldn't come at a cost of ecosystems, species, the rights of First Nations and the wishes of the people. If we continue business as usual, by mid-century, we face a world with no fisheries, no reefs, no rainforests and nine billion people struggling over what remains. It is our duty to usher in a brighter world.

We're smart enough, connected enough, and ambitious enough not to settle for a degraded world and failing natural systems. All over the world, dams and hydro projects are being removed at great cost to restore ecosystems and the priceless services they provide. We know how to produce energy from the sun and wind in ways that don't pit industry against the environment and First Nations people. We need to be reducing our energy demands, not creating infrastructure to facilitate an increase.

We also know democracy works when we engage in it, and the governments are our civil servants, not masters. To turn this around, we need to amplify the voices of the people in Bala, so the provincial and federal governments listen and get their act together. The project can be cancelled without a financial hit to the government and taxpayer, unlike similar projects in Ontario that cost us dearly, if we act now. It is not a done deal, but it may soon be if we don't act fast. This shouldn't just be important for residents of Bala, Muskoka, or Ontario. This is important for all of us.

Please add your voice to the fight by visiting FightForBala.com.

Rob Stewart is an award-winning biologist, photographer, conservationist and filmmaker.

This article exists as part of the online archive for HuffPost Canada. Certain site features have been disabled. If you have questions or concerns, please check our FAQ or contact support@huffpost.com.