Back in the 60s, when George Harrison, the lead guitarist of The Beatles, took sitar lessons from maestro Pandit Ravi Shankar, it started a trend that gained momentum globally over the following years -- the use of Indian instruments -- dhol, tabla, sitar -- in Western pop. Shankar, who would have turned 96 today, has many, many laurels to his name, including working with legendary violinist Yehudi Menuhin and filmmaker Satyajit Ray.

Here's one such lesson to George Harrison by Ravi Shankar:

Shankar picked up the sitar at 18 and mastered it to perfection. He is the recipient of the Padma Bhushan, Padma Vibhushan, and Bharat Ratna, India's highest civilian honour.

Here are some facts you might not have known about this classical music legend.

When Ravi Shankar was very young, his father and brother left India and moved to Paris. Paris had a powerful effect on the young Ravi Shankar who completed his education there and grew interested in Indian classical music and dancing.

In his early years, Ravi Shankar joined his elder brother -- the famous dancer Uday Shankar -- and his troupe and went to Paris in 1930. In 1938, he gave up dancing as a career and moved back to India. He then began his formal training for Sitar under Ustad Allauddin Khan and dedicated a number of years learning the instrument.

The song Sare Jahan Se Achha which was written by Muhammad Iqbal in 1904 and was set to tune by Ravi Shankar in 1945.

Ravi Shankar joined the All India Radio as a music director and worked there from 1949 to 1956.

5. Created a new Raga for Mahatma Gandhi following his assassination.

Following Mahatma Gandhi’s assassination in 1948, Shankar was asked to play “some mournful music without tabla accompaniment” on All India Radio. The Raga that he had created which drew from the name "Gandhi" was later used in the Richard Attenborough's 1982 movie -- Gandhi.

The year 1966 was an important one for Ravi Shankar as it marked the association of the maestro with the legendary George Harrison, the lead guitarist of the cult band The Beatles, who learnt sitar from him. This association boosted Shankar's popularity in the West.

The performance at Woodstock remains one of Ravi Shankar's main regrets. He called it a “terrifying experience”, where the stoned audience reminded him of “the water buffaloes you see in India, submerged in the mud”. He was so upset that he did not perform in the US for the next one year and a half. 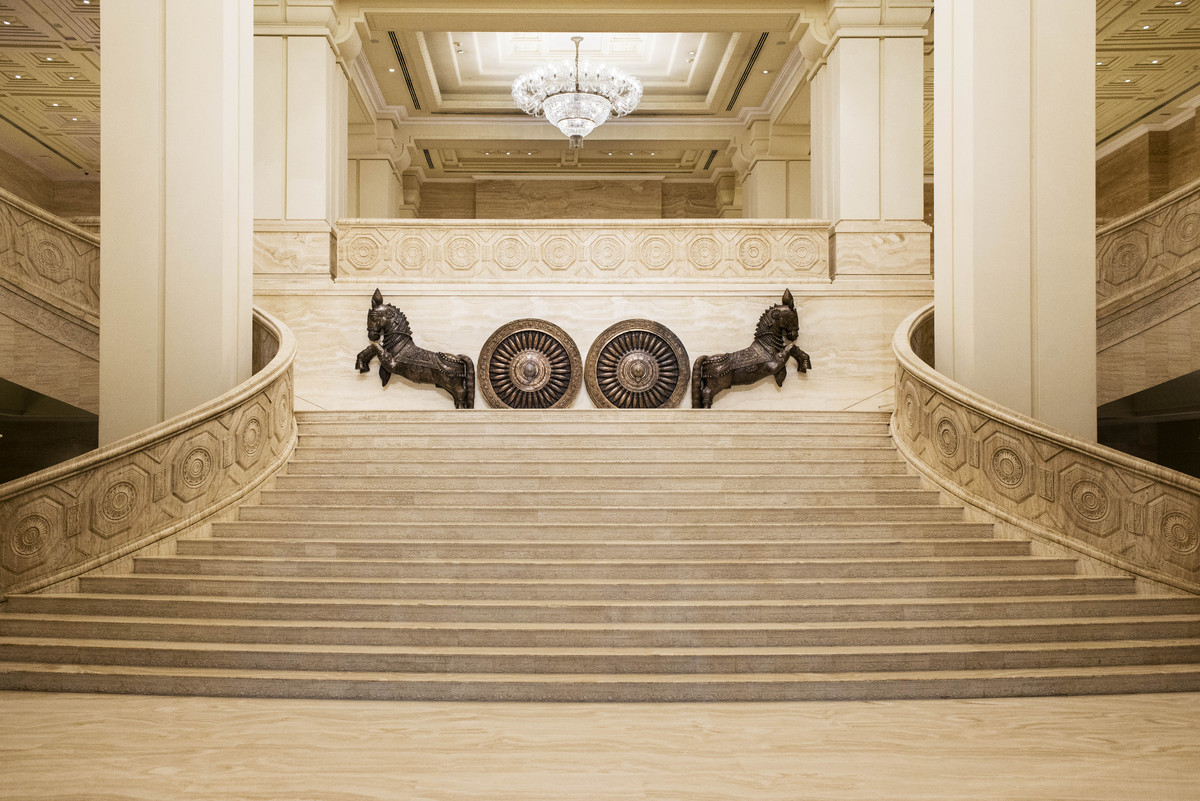 1 / 12
ITC Grand Chola, Chennai
Spread over 1.5 million sq feet, this Rs 1,200 crore property’s name justifies its connection to the city and the graceful Chola monuments that punctuate it. Click here to read more. With the efforts of architects Smallwood Reynolds and Steward & Steward LLC, these 10th- 12th century designs have been incorporated in the architecture. The Chola has borrowed heavily from the architecture of the magnificent Dravidian temple Thanjai Periyakovil -- apparent in the intricate fretwork and delicately carved ceilings of the property. The work of traditional sculptors from Mahabalipuram drapes the hotel’s walls, while stucco columns (432 in all) in the form of carved elephants and four-petalled flower motifs stand tall. The hotel also has four gateways facing the cardinal directions (Vallavan facing the north is the drop-off point for personalized check-ins to the Presidential Suites). But the west entrance, that leads to the Grand Staircase (Sangam), is a voyeuristic delight few guests can afford to miss. “The Chariot of Victory (shown in the picture above) is an embodiment of the influence and expanse of the Chola empires, and draws inspiration from the sculptures of the dynasty. Sangam has been conceived to recreate the awe-inspiring interiors of the palatial Chola temples and royal durbars,” reveals Dipak Haskar, chief executive, ITC Hotels. This relief was sculpted in the ancient ‘lost wax process' and cast in 'Panchaloham', an amalgamation of the five metals of Copper, Zinc, Lead, Silver and Gold, sacred in its significance and symbolic in its tradition. The sculpture has been accomplished by a Sthapathi (Master Sculptor) whose lineage dates back to the Chola Period. The Wheels and Horses are replicas from the Airavatesvara Temple, Darasuram, built by Raja Raja Chola II in the 12th Century AD and the Nageswaraswamy Temple, Kumbakonam, built by Aditya Chola in the 9th Century AD, respectively. In addition to its beautiful artworks, ITC Chola has also been awarded the title of the world’s largest LEED (Leadership in Energy and Environmental Design) Platinum Green Hotel. It has been built on the site of an old movie studio Narasu, and lies just eight kilometres from the airport in close proximity to Marina(Asia’s longest beach).
ITC Hotels