"The universe has a way of taking care of you," said Cliff.

***
Cliff and I sat at a high top table in the back of the Irish Bar off Times Square. Certainly not a classy spot, but we'd just finished opening night of our play and some of the cast went out for a beer. Yes, there is actually a bar called "The Irish Bar." I'd add a hyperlink for proof but they don't have a website.

"That's another thing I noticed about you," said Cliff. "You put yourself in situations where you're either going to fail or you're going to succeed. So the only thing for you to do is to try and succeed. Like with your job," he said.

"I hadn't really thought about it," I said. "After doing sales for 10 years, although I was successful, I just didn't want to do it anymore. I had no passion left for it. I didn't know what I was going to do but I knew I needed a change immediately.

"I believe God makes us uncomfortable because there's somewhere else we need to be," I said. "I knew where I needed to get to but I had no idea what path would lead me there. I dipped my toe into the water and created a ripple effect in the universe. I was offered three great opportunities within a week and I took the riskiest one, the one that felt right. It's a little scary but I know it will work out. And while I'm working at it, I have more time to focus on my passions."

***
"I've been having a hard time lately," said Cliff. "I had an issue with my landlord and got kicked out of my apartment. That's getting worked out, as the accusations were false, but still. I work at Blue Smoke out at JFK so I leave to catch the train at 3am to open the restaurant. Then I come to play rehearsal and get home around midnight. And I'm still writing. But I don't mind because I've got something here and it's gonna work out."

"You've been running on no sleep," I said. "You believe in yourself. I always say 'Dream Big.' People love to tell you you can't. Really what they're saying is they can't do what it is you want to do."

***
"One thing I notice about you is your ability to think before you answer a question," said Cliff. "Like when we were backstage and Joey said if you go down to the lounge maybe you could meet a guy and get lucky...I saw the look in your eye. You didn't particularly like his comment but instead of snapping something back at him you very quickly weighed your options. And you said, 'Well I was going to say maybe I could get a date, but you took it a step further.'

"That ability to think in split seconds about how what you say will impact the outcome, that will help you in your writing. When I'm watching something on TV, a lot of times I know what the outcome will be. So why do I continue to watch? When you've created something that people are talking about and having get-togethers in their homes to watch, then you know you've made a hit. That's what I want to do." 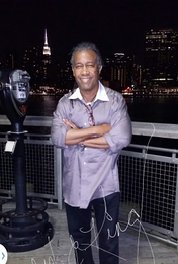 Joey walked over and sat down at our table. He looked at me. He had thick black gelled hair, and deep brown eyes. Joey was nearing 60 and although he looked good for his age, you could tell he'd lived a lot of life. Crude things would often escape the corners of his mouth in a thick Italian accent. He was the perfect gangster and often typecast. Joey was a firefighter, all heart and I liked him instantly upon our first meeting.

"I'm glad you're a part of our crew here," he said. "And I hope you'll do more work with us. Heather (the female lead in our play) started off with a very small part her first time with us. And like you, she was professional and did a good job. And you're not annoying," he said.

It was time to call it a night as I finished my second Stella. I said my good-byes and walked out into the lights of Times Square. 'I'm in an off Broadway production,' I thought. How awesome is that? I headed east. The universe was taking care of me.

Until next time, "Dream Big!"