One of the highlights of the Lisbon & Estoril Film Festival for me was the chance to speak to French film director Bertrand Bonello about his controversial film "Nocturama."

"Nocturama" is about a gang of teenagers who plan and execute a terrorist attack on Paris: a series of bombs that are set off contemporaneously in various strategic parts of the city, from La Defense to the Ministry of the Interior. It has received a scattering of negative reviews, particularly in Paris, where the film came out just seven months after the real terrorist attacks in November 2015. One criticism is that it glamorizes terrorism, making it seem like to be a terrorist is the height of hip. The teenagers in the film are beautiful youngsters who wear the right sneakers and dance to cool music.

It is true that the first hour is very uncomfortable to watch, especially for someone (like myself) who lives in Paris. The teenagers set up the bombings with the savoir-faire of agents in a spy movie. We watch with anticipation as one girl tries to book a room in a chic hotel with fake ID--so as to be near the Joan of Arc statue, which she will pour with gasoline. The suspense is that of a genre action film. To pull off such narrative tricks, in the light of the real terrorism that frightens Europe today, seems offensively inappropriate.

And yet the second hour totally deconstructs the first. It is brilliant. After the attacks, the teenagers go to hide in a department store (the actual defunct Samaritaine on Pont Neuf) , which turns into a hallucinatory huis clos. They are holed up in this vast space, in the height of luxury, passing the time by trying on clothes from Kenzo, Isabelle Marant, Gucci, cracking open champagne from the bistro, and racing around in giant miniature race cars from the toy department.

Their conversations are eerily hollow. They seem to have no interest in the terrorism they just wreaked. Pointedly, they don't even care about the number of deaths they have caused. Intermittently they turn on the television, in boredom, and watch the same repeated images of the bombed buildings, which seem strangely inconsequential. Bonello shows no city in distress. The clips show a rather nonplussed reaction to the bombings. We see no weeping, no crowds, no terror.

Ultimately it is the most scathing denouncement of terrorism possible. The bombings have no effect. They are useless, as the teenagers are useless themselves: empty vessels of modern alienated culture, with no personality, except for the clothes they try on.

"But you can see how this film could still encourage identification with these terrorists," said my colleague Jacopo, with whom I watched the film. "We are with these kids for the whole film, so we start feeling for them. We identify them as they worry about whether they are going to be killed."

"No, I couldn't wait for them to be killed," I said. "I was just curious to see which one would be shot first."

Call me heartless, but the teenagers are so devoid of humanity that it impossible to give them any more sympathy than the objects with which they are surrounded.

It seemed to be Bonello's point. The camera spins around the department store, for the entire hour---over and over to the same fashion sections--Kenzo, Isabelle Marant, Nike---so the film becomes a claustrophobic glut of glittering brands, foie-gras and high-design lights. The teenagers are so lacking in identity---we know not a thing about them--that they begin to blur, with the camera movements, into mannequins.

Indeed they were so lifeless that to kill them seemed the only animation possible.

I asked Bonello how he has dealt with the criticism of his film.

I imagined his response would be to state outright that this film, featuring terrorists, was not about terrorism at all. 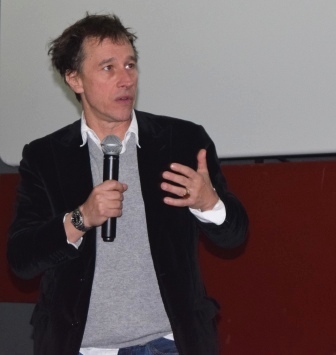 He--in a very dignified move--refused to enter the debate or defend himself.

Instead he just noted that it was difficult to get the film released, and that few people in Paris wanted to see it. He also noted that his script predated the November attacks by five years.

"[My film] was difficult in light of the attacks. What with its ultra-realism and abstraction. It was tough in Paris, tough with me. They didn't want my film in Cannes. They did not want any polemics. I received some hate mail, and some beautiful feedback. I can understand. Do you want to go to the cinema to see this film in France [after what happened in Paris and Nice]? Abroad it was much easier."

The director explained as well why he gave the characters no motivations or personal identity: responding to a central question raised by critics, who did not seem to understand that this void was intentional.

"I had two reasons for that. First, I didn't write the film with discourse. And second: I wanted to give no information, just show a general feeling. Not to say it was this or that."

I brought up my own take on his film: the film as a critique of department stores, fashion and contemporary alienated culture.

"Since I saw your film," I noted. "I will never go so easily into a department store again."

The director's response was illuminating:

"I am fascinated by malls. It is the recreation of the world, indoors. It is a world with no windows. A perfect world inside an imperfect world. It has a simulacrum of everything in the world: beds, food, clothes, everything. That is the way they sell it to you. As perfection. Everything is fake. The second part of movie is a contrast to the first. It features clear symbols of capitalism and interest: it eats them. I entitled the film "Nocturama" [inspired by Nick Cave's eponymous album] because that means animals in cages at night."

As to whether he himself is personally critical of department stores:

"I show the department store as it is: I am not criticizing fashion or critical of these kinds of stores. After all, I previously made a film about Yves Saint Laurent."

Not critical? I found this a startling disingenuous response, from someone who just stated that the department store, with its symbols of capitalism, "eats the" teenagers.

"Could he be protecting the sponsors?" I whispered to Jacopo next to me (he works in film production). "Are there regulations about what he can say?"

I had noticed the credits. Two pages of thanks to every brand name noted in the film.

"There are long contracts the director signs that prohibit direct vilification of the sponsors," Jacopo explained.

The last line of the film is the one crack of humanity in the film.

One boy faces the camera and, in a tender vulnerable voice, says: "Help me."

The question it left me with: how can you possibly help these kids who are formed into monsters by the consumer world in which they live?

"Good question," said Bonello. "How do you still help these kids, and how not to break civilization?"

The film received a thunderously positive response from the audience.

"The film really emptied me. It's my seventh film. I always know what to do afterwards. This time I need a huge break."