America's communications customers are being conned on so many levels it is hard to know where to start. According to Digital Fuel Monitor, other countries have figured out how to deliver unlimited wireless services for just 16-30 EUR. (One Euro is now $1.07 US dollars.) 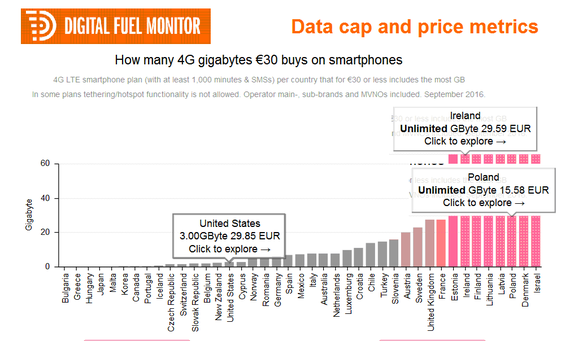 And even funnier, Verizon now claims it is going to offer a new unlimited wireless plan. This is after Verizon has been dumping customers who supposedly went over a magic 200GB limit.

Droid Life's headline says it all:

But, according to the fine print in Verizon's new offer, if a customer reaches just 22GB, the customer may be slowed down where other, more important priorities take over.

"The plan...Verizon called a 'great value,' will cost $80 for unlimited data, calls and texting; or $45 per line for four separate lines carrying the same features. There was a catch, however: Verizon added that after 22 GB of data usage on any one line, the company might 'prioritize usage behind other customers in the event of network congestion'."

And I need to laugh for a couple of reasons. This is a T-Mobile ad about their unlimited plan. It shows AT&T's plan vs T-Mobile and notice all of the other AT&T charges; some, like the "Regulatory Charge" or the "admin fee", are made up. So, while the advertisement may give a price, it will have nothing to do with what the customer actually pays. 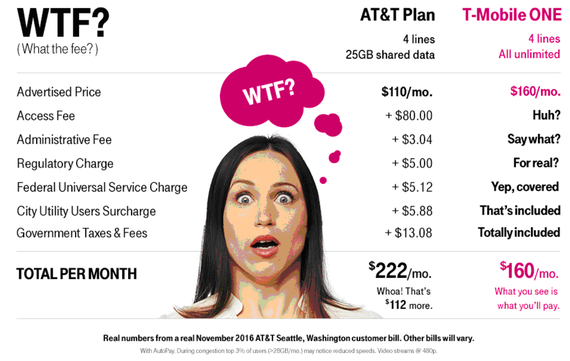 We assume Verizon will play the exact same game.

Ah, but that's not what is so funny. The fine print at the bottom of this T-Mobile ad, (that is too small to read), says that during congestion, the top 3% of users - those who go over 28GB/month - may experience reduced speeds. Also, the video 'streams' are at 480p - about ½ of HD, (though it appears you can adjust that so it can eat up your 'unlimited' plan faster.)

Verizon can't even be original and has the same 'kill' plan - but at 22GB.

How is this 'unlimited'?

But just how bad are America's LTE services?

OpenSignal tracks the speed and other criteria of wireless services around the world. Their recent report states: 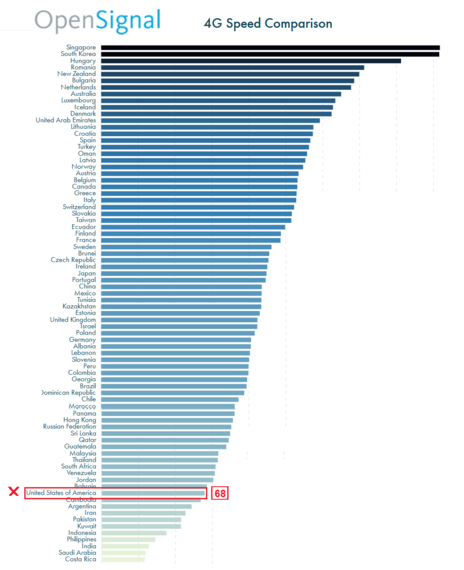 We're being played. America does not have the best 4G in the world. We certainly aren't the cheapest, even with these new plans. And our carriers can't seem to ever tell us the whole truth. 'Alt facts' in telecom have been the norm for decades.

And these unlimited plans that crap out at 22-28GB?

But, of course the new FCC is going to investigate this - right away. And you thought this article wasn't funny?