Sound Theatre Company's premier of ... And Jesus Moonwalks the Mississippi is a distinctive poetic vision of civil rights, freedom and the human struggle as seen in one man's (actually he's a hanged black man during the Civil War era who has transformed into a woman) journey to find his daughter and plant the seed of his song within her. If all that sounds complicated, it is. 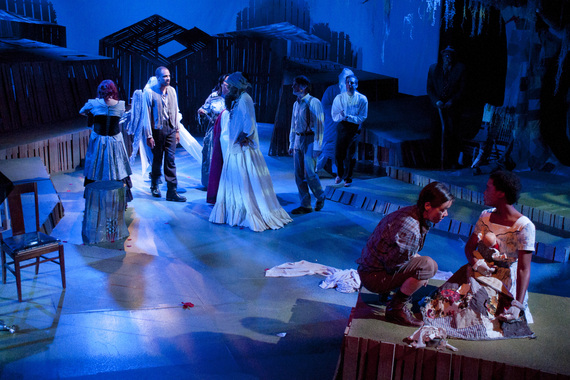 This is not a simple play, but it is quite stunningly beautiful in its words, staging and performance. After all, it's not often that the narrator of a play is the Mississippi River as brilliantly portrayed by Kathya Alexander.

Then there's the character of Free played by Lindsay Zae Summers. Free opens the show and does much to carry it as an innocent black child being raised as white during the Civil War. She is also the granddaughter of Demeter, who was a man and became a woman after he was hanged. Which creates the hero's journey to find her/his offspring.

More than anything else ... And Jesus Moonwalks the Mississippi is an epic poem encased in a beautiful visual performance. And although the plot seems complicated, it's easy to follow while enjoying the poetry of the spoken words. Plus the audience does get to see a moonwalk performed by a black female Jesus radiantly played by Shermona Mitchell.

All in all, this is a unique production well worth seeing. It continues at Seattle's Center Theatre through August 2.