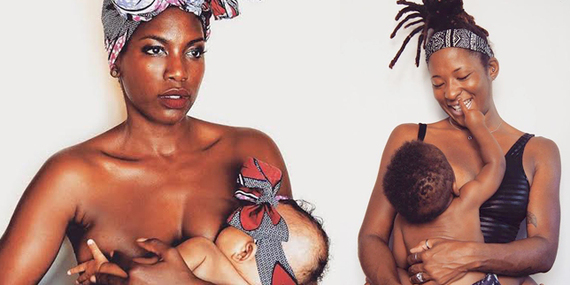 Here's what Black Moms Breastfeed is doing about it.

When it comes to breastfeeding, there is a drastic racial disparity: Black mothers are less likely than White mothers to breastfeed their children. Why? For starters, hospitals in Black communities do not promote nursing as much as those in white communities. But it's also about visibility. Black moms and babies aren't portrayed in maternity advertising and marketing as often as White moms and babies. And the same is true on social media. A little more than a year ago, I noticed that most of the popular maternity and new mom Instagram accounts depicted very few women of color. Clearly, there needed to be more of an equal representation of women who breastfeed. When you don't see yourself reflected in the mainstream media, you have to create your own platforms. So I created Black Moms Breastfeed.

Breastfeeding is, of course, about more than beautiful imagery; it's about our babies' health. The United States has a higher infant mortality rate than any of the other 27 wealthy countries, at 6.1 deaths per 1,000 live births. That number for Black infants is a staggering 11.1. This is a socioeconomic crisis that is clearly not due to a lack of breastfeeding alone. But it is estimated that we can save 1.3 million lives worldwide by reducing stunting, treating malnutrition, and increasing breastfeeding. As a global public health recommendation, infants should be entirely breastfed for the first six months of life to achieve the best possible health, growth, and development.

In recent years, breastfeeding rates have risen without question, with some of the greatest improvements being in the Black community. According to the latest official report from the CDC the percentage of Black women who chose to breastfeed increased from 47.4% to 58.9% over an eight-year period. A more recent CDC study even shows that of infants born in 2012, 66% of Black women chose to breastfeed. But while that is a fantastic improvement, breastfeeding statistics show that compared to other races, the Black community is still lagging: 75% of White women and 80% of Hispanic women choose to breastfeed. When baby turns six months old, only 27% of Black mothers continue to breastfeed, as opposed to 44% of women overall.

Researchers have been able to pinpoint several contributing factors to this racial disparity and its resulting health care crisis:

So why are these positive images of Black mothers and babies important? We live in an age where pictures and social media are huge pillars in our society: Facebook, Instagram, Twitter, Snapchat, etc. Visual representation is huge: it allows us to open our minds and start the conversation; and the more we see individuals who look like us and who we can relate to, the more normal a behavior becomes.

Unlike what the media often depicts, black women can be entrepreneurs. They can be business women and wives and good mothers, and they have and still do breastfeed. In an attempt to reframe the messages that we receive from the media, Black Moms Breastfeed hopes to highlight the beauty of breastfeeding across races and to serve as a platform where Black moms and babies can rest in love and community.

More from Well Rounded NY:
How to Get Ready to Breastfeed Before Baby Arrives
I Wasn't Ready to Wean
Is it Safe to Drink When You're Breastfeeding?

This piece was originally published on Well Rounded NY, and written by S.M.M., a Registered Nurse, Certified Lactation Consultant, and creator of the Instagram page @BlackMomsBreastfeed. She grew up in the Midwest, has traveled the country, and now lives on the East Coast. Please visit and support the community at Black Moms Breastfeed.

More:
Parenting breastfeedParentsPregnancyworld breastfeeding week
Newsletter Sign Up
Raise the kind of person you'd like to know
Subscribe to our parenting newsletter.
Successfully Subscribed!
Realness delivered to your inbox