April 21 marks the 42nd annual festival celebrating Chicano Park's "international recognition as a major public art site for its commanding mural paintings of the past and present struggle of Mexican and Chicano history."

It's hard to believe that what was once "street art" littering the off ramps and the trestles of a bridge now is part of what has become one of San Diego's cultural landmarks and more, one of our National Historic Monuments.

It started innocently, as all street art begins perhaps, when the neighborhood was denied local access to the beach during because the Department of Defense had other plans for the property. It was WWII, but that didn't matter. Denial of beachfront access was a source of local resentment of the government and its agencies.

While artists had earlier used the bridge dividing the neighborhood to paint their murals, the number of new murals and graffiti sprouted in protest to the government's decision. It was everywhere -- on the pillars, abutments, and ramps of the San Diego-Coronado Bay Bridge. 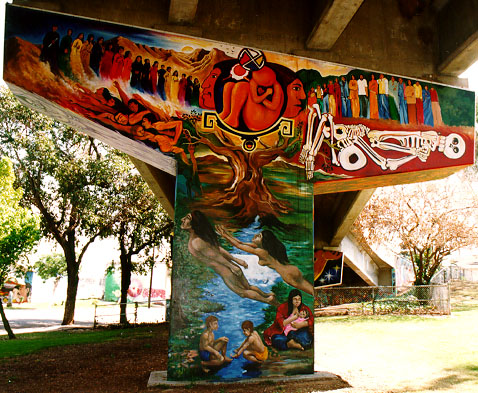 They asked that the area around the murals be rebuilt as a park for the neighborhood. The government agreed.

Then, according to a history of the Park:

on April 22, 1970 bulldozers... appeared under the pylons, grading a three-acre parcel of land adjacent to the park site. The bulldozers had not come to (build) the park, but to prepare a site for the construction of a California Highway Patrol station. The parcel had been acquired by the state in August 1969 after the Coronado Bay Bridge had opened. Chicano residents were furious, the earlier government decision angered them. But, they (believed they) had been deceived by city and state officials regarding the development of their park.

The neighborhood united and literally seized the area.

On the occasion of this anniversary the organizing committee takes pride that Chicano Park is:

where families gather to have a reunion or a picnic. Where the crisp tempting smell of carne asada floats in the air. Where the high pitched giggles of chamaquitos and chamaquitas reverberate against the cement pillars as they climb, slide and swing on a playground that people struggled and sweated for.

Something else is happening this year.

As Kelly Bennett of the Voice of San Diego writes:

After four decades... artists have been descending again from around the country on the park that bears the work of their youth. Older now, they've cobbled together teams of their children and friends to help climb scaffolding and paint hard-to-reach corners. Eighteen murals will get this revitalizing touch by next summer.

A few purists are uneasy about the restoration. Nonetheless, the message seems clear for the citizens of Barrio Logan and the murals that characterize the park; it's their park, and it's no longer street art either, but the art and culture and soul of the community.