Some may think it's smooth sailing from the time a song is just a twinkle in its creator's eye til its debut on an Apple playlist. Au contraire. There is much sweat equity involved in the writing, re-writing, demo-ing, mixing...and let's not forget a good share of rejection before someone says, "I love it." "It's perfect." "We're cutting it tomorrow." It's pretty much a guarantee that every song that makes it all the way to someone's ear buds has a story to tell.

Sixteen months ago as I was walking across the Wesleyan campus on a college tour with my daughter, my iPhone buzzed. I had told myself I would not be taking business calls on this trip. But this was different. The caller was Steven Vincent from Disney...and I love Steven Vincent. Doesn't everyone? So I said..."Hello?"

Steven had a tasty backing track (music in need of lyrics and melody) for the opening scene of the Disney film-in-the-making "Descendants" and he wanted to know if I would have a go at writing for it.

The movie, directed by Kenny Ortega, tells the story of the teenage children of Disney's most notorious villains (Maleficent, Cruella de Vil, Jafar and the Evil Queen) and a choice before them: either sprinkle the planet with more evil or try to find the good in their hearts.

This sounded like a fun assignment. Only thing was I had no access to a recording studio on the college tour. So even if I was inspired by said backing track, how would I document my idea? And there was something else...I'm not a big fan of writing to tracks. I much prefer getting creative in the same room as a collaborator. But this track (produced by Joacim Perrson) was different. This track didn't sound like all the others. And as soon as I heard it I knew what I wanted to say.

The next day in our hotel room, while my husband and daughter were discussing our next stop (NYU), I slipped into the bathroom and nestled myself in the bathtub with my laptop. I imported the track into GarageBand and proceeded to sing my song "Rotten To The Core," directly at my computer screen because I had...no microphone. Sonically, it was horrible. Track bleed all over the place. Unprofessional in every way...but in my gut, I felt like I nailed the SONG.

I sent my isolated vocal stems to Joacim who mixed them into his music and then mp3'd our submission to Steven.

Steven called the next day to report that Kenny loved it. He asked if I would change a few words here and there as this was a Disney film and talk of running red lights would not fly. I get it. I had a little girl once.

By the time my more g-rated language was approved I was back in Los Angeles with access thankfully, to a proper home studio in which to record a new lead. I'd have a microphone this time. No Bleed. Way better sonics. But a funny thing happened when I sent the new version to Joacim: he asked me why the vibe was so different. He missed the rawness. Could I sing it again with whatever set up I used the first time? I lost the mic and back into the bathtub I went. 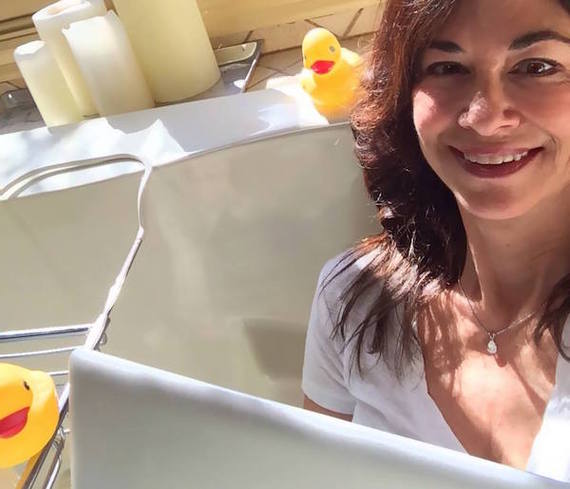 A few months later Jo and I were in the studio (a much bigger one) recording vocals with all four teenage villains (Booboo Stewart, Dove Cameron, Sofia Carson and Cameron Boyce). 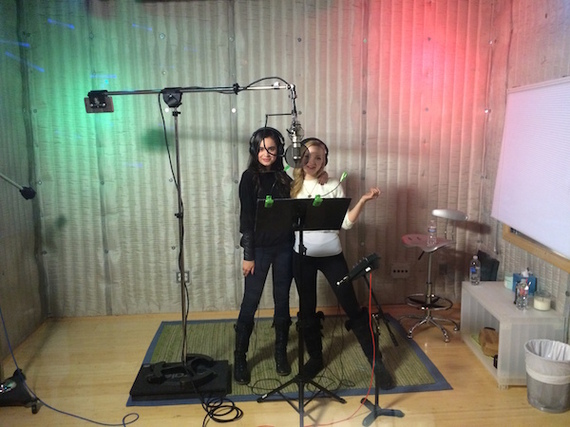 This might seem like it was easy peasy but to put things in perspective nine out of ten songs I write for the general population of recording artists at large never see the light of day. For a song to go all the way without anybody's mind changing is nothing short of a miracle.

That's why, last week when I went to see the premiere of "Descendants" I savored the moment (and every morsel of lightly buttered pop corn that touched my tongue). I never get used to the feeling of hearing one of my songs come full circle. Nor do I ever wish to.

So my friends, this Friday night at 8, if it behooves you, fire up your flats screens and enjoy this fun-filled adventure. Your kids will love the young villains and us baby boomers will enjoy the hilarious performances by Kathy Najimy, Kristin Chenoweth, Wendy Raquel Robinson and Maz Jobrani. Find out for yourself if the Descendants stay evil or change for the better. And when you hear "Rotten To The Core," you'll know its story. 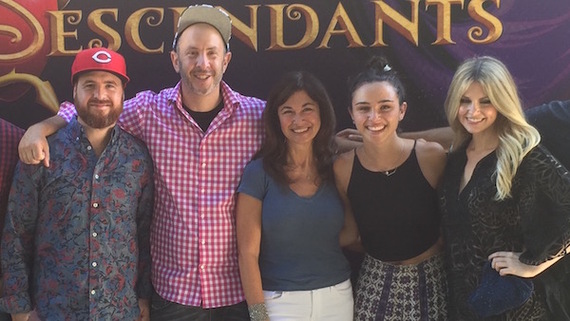 That's me and my college bound descendant to my right, with Josh Edmondson, Sam Hollander and Charity Daw who also wrote a song that appears in the film.

Thanks for listening, everyone! Please visit me at ShellyPeiken.com, my Serial Songwriter Facebook Page, and feel free to follow me on my Amazon Author Page so when my book drops, you'll get the memo.