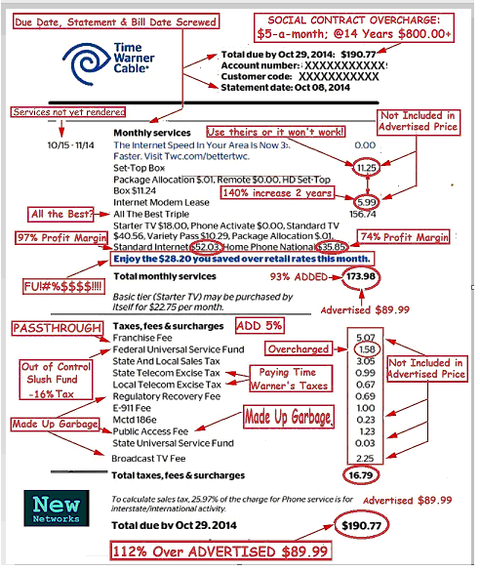 When I look at a nutritional label on a can of soup to determine whether it has too much salt, or the label on a cereal box to parse how much sugar is added--I know that the aisles of the grocery store are filled with lots of items to pick from. And because there are lots of companies competing, prices remain more or less stable and I get to pick how much salt, fat, or sugar I intake, not to mention the total calories I will ingest.

In April, 2016, the FCC announced its "Consumer Labels for Broadband Services". Here is the sample label for wired broadband. Compare it to the actual Time Warner Triple Play bill above and you'll see there are a host of problems. 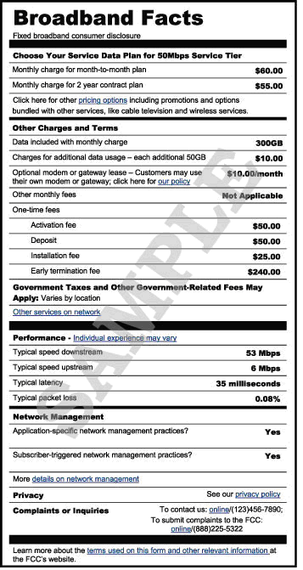 While the FCC has attempted to clean up the broadband bills, and this is being touted as similar to a nutritional label for food--at the end of the day it supplies nothing to fix the mess of the current billing, the deceptive practices, the addition of made up fees and additional expenses, and so it is really just a reminder--there is no competition in America today.

Even if some of the new label items are useful, if you find that the equivalent of additional fat, salt and sugar are over the top and harmful; too bad, you can't simply 'leave' and find some other less offensive brand.

Moreover, as we will discuss, most customers buy broadband as part of a double or triple play package, combined with cable TV and/or phone service; this label, then, can't be used for, say, the opening TWC bill.

Truth be told, our communications bills are now a dumping ground for added, made up fees and questionable charges. These are done as additions so that the companies (and regulators) can quote the 'lower price' and leave out the additional 10%-40% of the charges--many of them just additional, unmarked revenue.

Unfortunately, the task to clean up the bills was given to the FCC's captured, Consumer Advisory Committee (CAC) -- Did you know that Verizon is one of the longest standing members on the CAC and has been on the Committee for over 15 years? And while there are many outstanding consumer groups and advocates on the Committee, anyone who cares about Truth-in-Billing and Truth-in-Advertising fixes wouldn't pick this Committee to do anything. As I'll discuss, they've been blocking the fixing of telecom bills since we were on the Committee back in 2003-2004. Moreover, it is no surprise that Verizon is joined by T-Mobile, CenturyLink and the cable association, (NCTA), and there are multiple 'consumer' groups and others with direct financial ties to the ISP broadband providers--Verizon, AT&T and the cable companies.

With this kind of line up, it's no surprise that these new labels are voluntary or that they were unanimously accepted because of its limited use.

I'll divide this article into two parts. The first will explain how the broadband fat, salt and sugar content are being forced on you; the second will be to expose the history of why there is no truth in Truth-in-Billing.

PART 1: A Nutritional Label or Just Labeling an Unhealthy Diet.

The opening Time Warner Cable bill is a triple play--the majority of the US purchases their broadband via a double or triple play. These packages include the cable TV fees, phone fees as well as all those nasty taxes, fees and surcharges.

This is the break out of Time Warner Cable's residential services from the 2015 Annual Report, and Charter's 1st quarter 2016--and the numbers are close to identical. Over 60% of customers purchase a double or triple play and the 'single' play can be either cable or broadband-Internet service. Assuming that ½ is broadband and ½ is cable TV only, a 'broadband' label, then, would leave out the majority of services on the most common configurations of buying broadband.

Thus, a large part of the broadband nutritional label is useless as broadband is only one component of a complicated, overstuffed bill.

Compare the opening TWC Triple Play bill with the FCC label. The 'Internet' is not supposed to be charged taxes, etc., so why is the TWC bill littered with taxes, fees and surcharges? Cable TV and phone service pay the majority of these fees, but this is not always the case and it is impossible to know that from the current bills.

For example, the following is a Verizon FiOS New York double play from September 2015 - it has $17.39 a month in taxes, fees and surcharges. Are they correct? Where is any information about the application of this mess? Are any of these fees specifically broadband or cable related? There is no way of knowing how they are being applied and on which service. 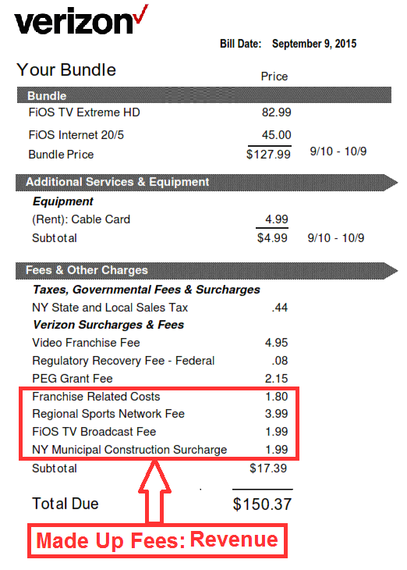 More importantly, were these fees ever 'justified' and checked by any regulator or tied to actual costs for, say, the broadcast and regional sports expenses, or is it just - We needed more profits so we just added this crap.

And talk about a lack of 'Truth-in-Billing'; we marked the 'made up fees', all of which continue to go up at an alarming rate. They are direct revenue to the company and they are not 'government mandated'. On my current Time Warner Cable Triple Play, the 'Regional Sports and Broadcast' fee is now $8.75 a month--up from the $2.25 on the featured opening TWC bill from October 2014. We assume that the fees on this bill also went up.

On the FCC broadband nutritional label we find:

So, is the FCC violating Truth-in-Billing on a label supposedly supplying accuracy and transparency? And where does it say that these fees are 'revenues' to the companies? Customers are paying the company extra for what are essentially 'the costs of doing business'.

When you buy a car, is there an extra fee for the tires? Or is there a 'We pay a sales bonus on each sale, so we pass it on to you as an added charge' fee or...

The FCC has also supplied a nutritional label for wireless broadband. However, a wireless phone's broadband use and the associated billing is even more problematic. Below is a sample AT&T wireless bill supplied by AT&T. (Note: While it is on the AT&T web site as of May 5th, 2016, the copyright date is from 2011, so it may or may not be recent.) 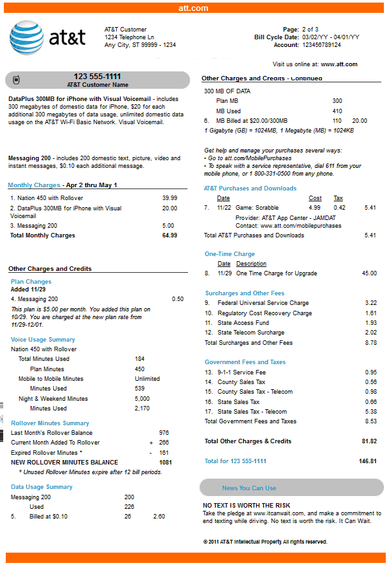 Like the triple play, where the cable TV and phone service are intermingled with the broadband service, AT&T's iPhone bill has the exact same problems. On this bill, where exactly is a line item for the 'broadband' service? Where are the taxes, fees and surcharges dedicated to this service?

This bill has over $17 dollars in taxes, fees and surcharges. What services are they applied to? How are the calculated? Are they based on a 'percentage' or a fixed fee? There is an endless stream of 'Truth-in-Billing' violations as there is no information on either the web site or the bill to answer these basic questions.

(And sadly funny; this imaginary customer had overages on their wireless use. They are on a 300MB plan but had 410MBs of use and were charged an additional $20.00.)

It is now an industry-wide practice to deceive the public when they purchase a new plan and almost all ISPs are selling services using a promotional price. It is never based on the total costs someone will pay when they sign up. Worse, at some point, the promotion ends and the price can go up 100+%.

Are the prices shown 'retail', which the majority of consumers do not buy? If a customer sees a package for $89.99, which includes cable TV, vs. just broadband for $60.00, which one do you think they'll end up with?

And where does this 'nutritional' label sum up the calories?--I.e., what does the entire package cost? Where is a calculator to do the math? I.e., I input the plan I want on a web page or app, and it gives me the taxes, fees, surcharges for my location for the first year with and without promotional pricing, etc.

This is now trivial to do, yet this static FCC label in the Age of Apps, without it giving the actual costs and details--is, well, so 20th Century.

Instead of doing something substantial to change the diet of America from bloated broadband and the overpriced triple play with lots of additional charges, we are all now forced to eat too much fat, eat too much salt, and eat too much sugar.