So what's been going on with the Toy Story gang since we last saw Buzz, Woody & Co. on the steps at Bonnie's house, as they sadly watched Andy drive off to college? Quite a lot, actually. 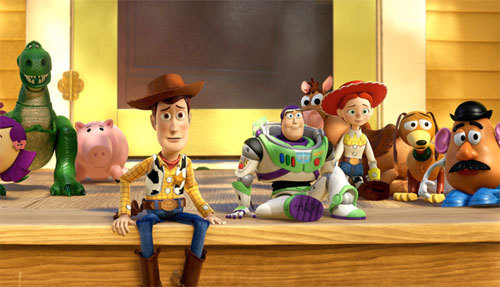 On the heels of the June 2010 release of Toy Story 3, Pixar Animation Studios took a two-tiered approach toward keeping these much-beloved characters front-of-mind. The first part of this program involved the creation of Toy Story Toons, a series of stand-alone shorts which showed how Andy's old playthings were settling in at Bonnie's place.

The first in this series -- Hawaiian Vacation -- was released to theaters in June 2011 with Pixar's next full-length animated feature, Cars 2. And to hear Galyn Susman (i.e., the producer of this particular animated short) talk, there was a very specific reason that this was the first Toy Story Toon out the door. 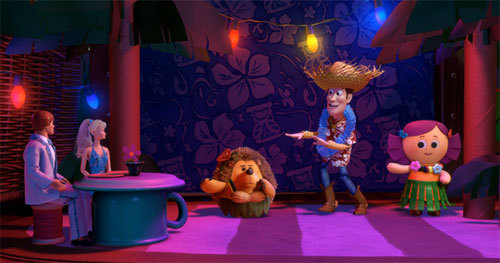 "The people who work here at Pixar are just like the fans of the Toy Story films. We genuinely care about these characters. So with Hawaiian Vacation, we wanted to show that -- since we'd last seen them in Toy Story 3 -- Bonnie's toys and Andy's toys had actually come together as a family. That they could now work together as a group on a project like trying to save Barbie & Ken's romantic get-away," Susman explained during a recent phone interview.

The second part of Pixar's front-of-mind effort for its Toy Story characters involved the creation of two holiday specials: Toy Story of TERROR! (which debuted to great reviews back in October of 2013) and Toy Story That Time Forgot (which premieres tonight on ABC at 8 p.m. ET/PT). 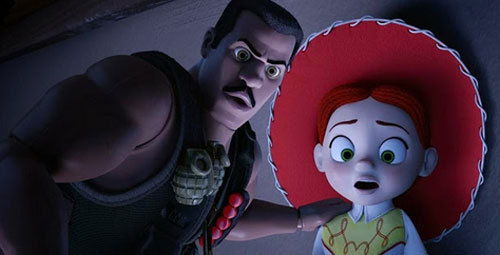 "And as the producer of these two holiday specials, I can tell you that what was fun about working on Toy Story of TERROR! was that we got to circle back on two story elements that Pixar had introduced with previous Toy Story movies: the Combat Carl action figure that Sid blew up in the first film and Jessie's fear of being boxed up in small tight spaces in Toy Story 2. And it was nice to be able to tell a story about how Jessie grew as a character, overcame that fear with Combat Carl's help," Galyn continued.

Whereas Toy Story That Time Forgot had a very different origin. It actually started off life as something that was supposed to appear on the big screen, rather than the small screen. 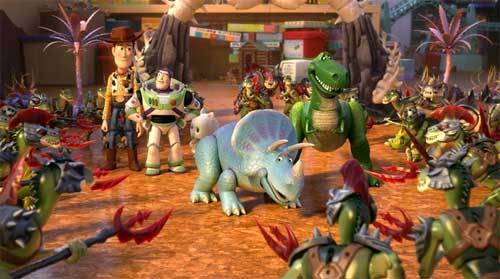 "When we first started working on Toy Story That Time Forgot three years ago, it was originally supposed to be a Toy Story Toon. This six or seven minute-long story about how Rex and Trixie befriended some Battlesaurs, which are these dinosaur-themed action figures. Buzz and Woody weren't really in this short at all. At best, those characters made cameo appearances," Susman recalled.

But as soon as John Lasseter saw the preliminary Battlesaurs designs, he loved these characters and their world. Which is why he urged Galyn and her team to think bigger. To take Trixie & Rex's brief interaction with these action figures and then turn it into a full-blown adventure.

"And since a lot of the artists & designers who now work at Pixar grew up playing with He-Man and Transformers action figures, to now be asked to envision an entire line of warrior dinosaur toys was a dream-come-true. They designed everything from the armor these characters wore to the weapons they carried right through to the Arena of Woe. Which is where the Battlesaurs battle," Susman said.

And because the Battlesaurs have yet to be played with as Toy Story That Time Forgot is getting underway... Well, just like Buzz Lightyear did in the original Toy Story, these characters don't know that they're toys. The Battlesaurs think that they're this proud race of warriors protecting their world from intruders. 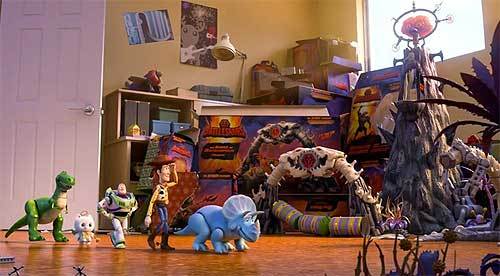 Speaking of which ... One of the more intriguing aspects of this holiday special is that -- as Buzz, Woody, Rex, Trixie and Angel Kitty (i.e., the Christmas ornament that Bonnie has recently added to her array of playthings) enter Mason's bedroom (EX: Mason is Bonnie's friend-from-school who has invited her over for a post-Christmas play date) -- the area that these Toy Story characters are exploring is clearly a young boy's bedroom. But that begins to change as Toy Story That Time Forgot unfolds.

"As Trixie, Rex, Buzz, Woody and Angel Kitty enter the elaborate Battlesaur playset that Mason received for Christmas, his bedroom begins to fall away. Since these dinosaur action figures think that Battleopolis -- the world that the Battlesaurs supposedly live in -- is a real place, we actually changed the art direction of this holiday special to reflect their delusion," Galyn explained. "So during this portion of Toy Story That Time Forgot, sharp-eyed viewers may notice that the style of lighting that's used in this part of the show changes. And that while Trixie, Rex, Buzz, Woody and Angel Kitty are deep inside the Battleopolis playset, they can no longer see the walls, windows and doors of Mason's bedroom."

As one watches Toy Story That Time Forgot (which -- FYI -- makes its ABC Family debut on Sunday, December 7th at 8:30 p.m.), it's pretty obvious that Pixar didn't stint on this production. From the size of the crowds of Battlesaurs who look on as Trixie and Reptillus Maximus (who is winningly voiced by Kevin McKidd of Grey's Anatomy fame) do battle in the Arena of Woe to the fact that the original voice cast from the original Toy Story film trilogy (i.e., from Tom Hanks and Tim Allen all the way through to insult comedy legend Don Rickles) all returned to reprise their roles, this is one holiday special that truly is special.

Mind you, Toy Story That Time Forgot may be Pixar's last holiday special for a while featuring this particular set of characters. Given that -- just last month -- Disney CEO Bob revealed (as part of a quarterly earnings conference call) not only revealed that a Toy Story 4 was in the works, but that this Pixar Animation Studios not only had a release date (i.e., June 16, 2017) but a director (i.e., Pixar and Walt Disney Animation Studios' Chief Creative Officer John Lasseter) and a producer (i.e., one Galyn Susman). 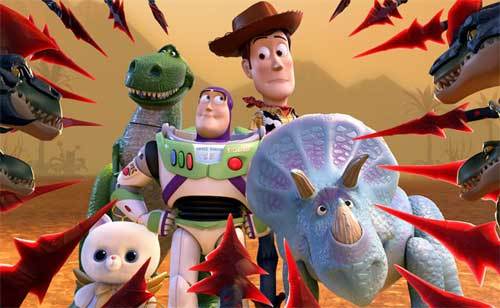 "As you might expect, I'm not really in a position to talk about Toy Story 4 right now. What I can say is that -- while I was ready to say goodbye to these characters at the end of Toy Story 3 -- the story that was pitched to me for the next feature-length installment of this series was so smart and so strong that I understood immediately why John wanted to revisit the world of these characters," Susman enthused. "Beyond that, what else can I say about Toy Story 4 ? Well, if people go to see this new Pixar movie in 2 & 1/2 years, they might see a new toy."

Speaking of new toys ... If you like what you see during tonight's holiday special, just be aware that action figures inspired by Toy Story That Time Forgot will begin popping up on store shelves starting early next year. So if you've ever dreamed of owning your very own Goliathon ... 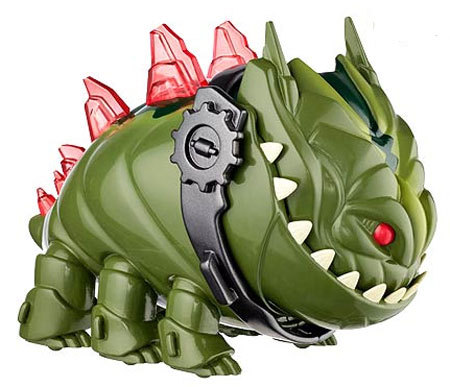