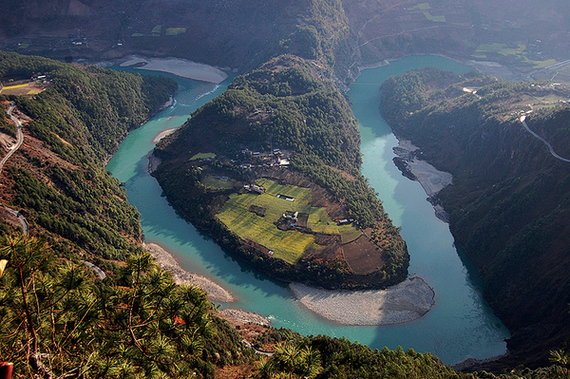 The breakthrough of wind and solar power helps to keep rivers like the Nu/Salween free-flowing (Peter Ford, Christian Science Monitor)

Wind and solar power are on an exciting ride. Last year, new renewables for the first time made up more than half of the power capacity that was added around the world. New wind and solar plants, in other words, outstripped all new fossil fuel, hydropower and nuclear power plants. "Renewables are now established around the world as mainstream sources of energy," states the Renewables 2016 Global Status Report. This is great news for the climate and for the world's rivers.

The future hasn't always looked so bright. Until recently, dam builders were able to ride on the coattails of the renewable energy boom. Wind and solar power are intermittent, and storage is an issue. Many large reservoirs were built to generate hydropower at times when the sun doesn't shine and the wind doesn't blow. This has fueled a dam building boom that threatens critical ecosystems around the world.

Now, this trend has been broken and renewable energy projects have started to eat the dam builders' lunch. A number of factors account for this: Wind and solar farms are competing with hydropower on price. They can be built much more quickly than large dams, and typically with much lower cost and time overruns than mega-dams. Wind and solar power are also less exposed to climate risks than hydropower plants, which have seen numerous reservoirs lie empty during recent droughts. Finally, power system managers have found ways to absorb growing amounts of intermittent wind and solar power without building more large reservoirs.

Wind and solar projects can also have negative impacts on local livelihoods and ecosystems. Yet wind and sunshine are so abundant that destructive projects can more easily be avoided than in the case of dams.

According to the 2016 Renewable Capacity Statistics of the International Renewable Energy Agency (IRENA), the world added 63 GW of wind and 47 GW of solar power in 2015. In comparison, only 22 GW of large hydropower capacity was added during the same year - down from 38 GW in 2013 and 32 GW in 2014. A new report by UNEP and Bloomberg New Energy Finance offers even starker figures, with 64 GW for wind, 56 GW for solar, and again 22 GW for new large hydropower projects in 2015. (A full-sized version of the infographic on the left is available here.)

Bloomberg figures for investment flows show that wind and solar power have become the biggest game in town. In 2015, a full $271 billion were invested in new wind and solar facilities, compared to $130 billion in fossil fuels and $23 billion in large hydropower. This suggests that renewable energy will continue to outpace capacity additions for fossil fuel, large hydropower and nuclear power in the years to come.

The abstract figures confirm our experience on the ground, as we have seen numerous large dams stopped or suspended in China, Russia, Brazil and Cambodia in the past six months. We hope that these decisions only mark the beginning of a new trend as destructive dams continue to hit the wall and better solutions become ever more appealing.

At the same time, large hydropower developers are not giving up their markets without a fight. They are aggressively lobbying governments to build more large dams, arguing that developing nations should do now what industrialized countries did in the 20th century. They are spreading the myth that wind and solar are the solutions of a distant future, and not suitable for poor countries at this stage. As we have seen in the case of the Belo Monte Dam in Brazil, dam builders are also ready to pay massive bribes to get their ways.

And so, many governments - in Africa, for example - continue to favor the energy sources of the past, and still have no programs to expand wind and solar power in their countries. The African Union's Program for Infrastructure Development in Africa identified 13 priority projects for the continent's energy sector, and all of them are hydropower dams. Likewise, the Eastern Africa Power Pool is also completely focused on the expansion of hydropower in the region, even though East African countries are already suffering from severe hydro-dependence.

In this situation international organizations such as the World Bank and the International Energy Agency should act as honest brokers, offering independent advice on how poor governments can create sound energy planning systems and support the breakthrough of wind and solar power. Instead, as my colleague Josh Klemm documents, these powerful organizations have stayed far behind the curve on renewable energy. In 2010-15, the World Bank spent 65% of its renewable energy lending on hydropower, and only 23% on wind and solar projects.

Even if some holdouts are slow to realize it, the world is going wind and solar at a rapid pace. This is exciting news, and developing countries shouldn't allow themselves to be frozen out of the ongoing energy revolution.