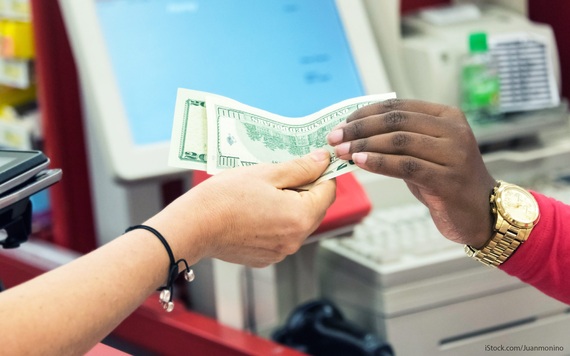 In 2015, shortly before turning 26, I opened my first credit card. It was a Capital One Platinum MasterCard, for which I was pre-screened. It came with a $500 credit limit and an interest rate that almost exceeded my age at them.

"And it's got travel accident insurance!" I told my mother excitedly on the phone, squinting at the fine print on the approval letter. "'For loss of life or limb at no extra charge!'"

If you're wondering why I was so excited to be the owner of what is basically a Fisher-Price credit card, you have to understand the Napoleon complex that not having any credit gave me.

I was never trying to make a point by living without a credit card, like those famously responsible members of my generation. "Millennials are saying no to credit cards," a 2014 CNN headline reads. My problem was that all the credit cards were saying "no" to me.

I had been trying to get a credit card for a few years; I applied to several of the easy ones my friends promised had been their "starter" cards but had zero luck. Companies that promised a response "in only 60 seconds" took about two weeks to let me down over snail mail.

The problem was I had what agencies call a "thin file" -- too little information about my financial history to vouch for me. I'd never had a credit card, student loans or car payments. Years of diligently paying my rent or utilities on time had never been picked up by a credit reporting bureau. All I had to my name were a handful of hard credit card inquiries.

Basically, I was stuck in that awful credit catch-22 of not having the lines of credit you need to build a credit score to obtain access to credit.

It's important to hop in and say here that there were a number of options I could have taken at this point:

Instead, I just kept applying to cards that were bound to reject me and, in the meantime, getting by (more or less) without credit.

Financing Your Life Without a Credit Card

If you don't have a credit card, you have to be a little craftier about how you pay for certain things, like car rentals, hotel stays and items you can't afford.

The first two usually require a prohibitively big cash deposit or a hold on your debit card. There are, however, several ways to get around this, including the time-honored tradition of mooching off your companions. For example, if you're sharing a hotel room with a group, there's always going to be the reliable friend who will put the deposit on his credit card (he's probably the one that drove you all there in the first place). You'll Venmo him for the gas and room costs later.

If you don't want to continually be that friend, you can also try to bargain with the hotel or rental company over the phone; it's amazing what a little bit of shmoozing will get you.

That's what I learned from Cynthia MacGregor, a freelance writer and editor from Palm Springs, Fla., who's had to live without a credit card for years after declaring bankruptcy. She told me she never missed having a credit card at all, except when she had to rent a car on a business trip. She'd previously had luck at a rental car company in Austin, Texas, that didn't require a credit card but learned in advance of the trip that cash deposits were no longer accepted.

"But when I expressed disappointment, saying that had not been a problem last year, the woman asked me to hold on, and a minute or two later returned to the phone to tell me they would make an exception for me," MacGregor said.

The "asking nicely" policy works surprisingly well for a number of the purchases that usually require a credit card. But it's not going to fly when trying to buy something you simply can't afford.

Dirty Ways to Get by Without a Credit Card

This is something you shouldn't do regardless of whether you have a credit line, of course. But if everyone stuck to only purchasing what they have the money for up front, the average household credit card debt wouldn't be almost $16,000.

As a post-grad with a studio apartment, part-time job and no emergency fund, I didn't have a credit card to rack up charges I couldn't pay. But I did make a harmful financial move from time to time when I needed a little float. Instead of sitting down and figuring out what I could live on, I would make it to the end of every pay period with $0 in my checking account. Then, I would make a calculated overdraft.

Overdrawing my account never hurt my credit -- since a fresh direct deposit always wiped away the deficit -- but it took a hefty chunk out of my budget each month.

It's basically the equivalent of treating your checking account like a payday loan, and it'll get you in the exact same cycle of always being in debt to yourself. In 2014, the Consumer Financial Protection Bureau estimated that the interest you'll end up paying on a single overdraft is about 17,000% APR.

It was a hard habit to break. And it taught me something important: I probably don't deserve credit.

Why People Like Me Probably Shouldn't Have Credit Cards

Recently, I've been talking to people who also lived or are currently living without a credit card. In most cases, on their end, it's a choice -- it's because they weren't responsible back when they had credit.

Have you heard about the Stanford marshmallow experiment? It was a study done in the 1970s that measured how well a bunch of kids were able to delay gratification. Young participants could either eat one marshmallow now or two in 20 minutes. Years later, they found those who were able to wait the 20 minutes for a 100 percent return on marshmallows had higher GPAs, better graduation rates -- and, unsurprisingly, higher credit scores.

My natural resting state is as a one-marshmallow kid. And that's true for a lot of people.

Overspending is classified as an impulse control disorder by the Diagnostic and Statistical Manual of Mental Disorders, just like alcoholism or an eating disorder. It affects about 6 percent of women and 5.5 percent of men, according to a 2006 Stanford University study published in the American Journal of Psychiatry.

"Basically, I treat myself around credit cards the way an alcoholic treats themselves with booze," Allyson Whipple, an adjunct professor at Austin Community College, told me. "I just need to stay away from them!"

Well, I have one now, along with a rough budget, a fledgling credit score and a great respect for how much trouble credit can cause. I diligently pay off my balance every month, because I know what a slippery slope it can be if I don't. I'm working on budgeting, saving and investing (I opened a 401k in 2014 and contribute the most I can for a full employer match).

Basically, for the first time in my life, I'm living like I don't have credit -- with my first credit card.

Keep Reading: 31 Ways to Screw Up Your Credit