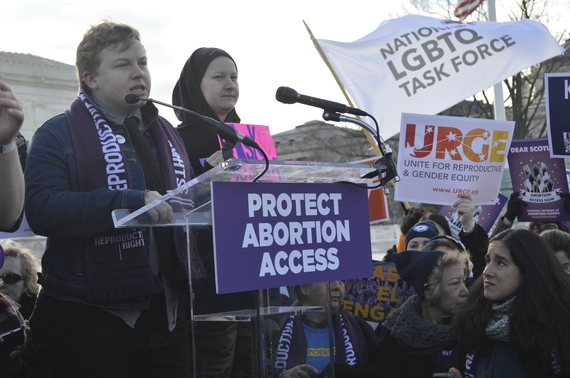 One week ago, the Supreme Court heard the most significant abortion rights case in a generation. In this case, Texas abortion provider Whole Women's Health is suing the state of Texas to overturn their clinic shutdown law and ensure that abortion is accessible, safe, and legal to all. On the front steps of SCOTUS, I, along with two dozen other activists, stood up for the right to an abortion. At first glance, as a transman, I may not be what people typically expect out of a pro-choice champion. Trans folks and people of the queer community might not always see the connection between their lives and abortion rights, but hopefully, I and many others that advocate for trans inclusion within the reproductive rights movement will change that. I have never spoken on such an important topic in front of such a large group of people before but the confidence I gained and the support and love I felt that day, inspires me to keep working to build a bridge between the trans community and abortion rights.

Before attending a Reproductive Justice workshop as a student at the University of Cincinnati, I already considered myself to be pro-choice. However, identifying as a transman, I saw myself as an ally to the movement. I didn't think that abortion rights applied to me or people like me. My idea of those that needed reproductive rights were cisgender, pregnant women. It wasn't until I joined URGE and learned more about reproductive justice that it dawned on me that as a human being, I have a reproductive system and sexual health needs and access to care that meet those needs should be protected. But then I started wondering, what made me believe that I didn't directly benefit from this movement to begin with?

When it comes to seeking health services, especially reproductive health services, transgender folks are exposing themselves to the risk of being othered, having their identity completely disregarded, or being bombarded with uncomfortable and invasive questions. There have been many times that I have chosen not to seek medical care because I was afraid of having to explain myself or of being disrespected. When the choice becomes seeking medical attention and dealing with mental and emotional distress or going without medical attention and dealing with those repercussions, more often than not, transgender people choose the latter. Learning that the reproductive justice movement is dedicated to bodily autonomy and personal agency regardless of gender was a relief to me. This movement openly and enthusiastically allows me a platform on which I can speak about these issues and stress the importance of making health services safer and more comfortable for trans folks.

For a transman to walk into an abortion clinic, these barriers to health care can be insurmountable. But of course, some trans folks will find themselves needing an abortion. People all across the LGBTQ spectrum need abortions and many of the other reproductive and sexual health care services that are offered in the very clinics that would be closed if these sham laws are not struck down by the Supreme Court. One of the many reasons why the queer community needs abortion rights is the terrible and brutal reality of rape and sexual assault as a hate crime. The damage a pregnancy does to a LGBTQ person, or any person for that matter, because of rape is unfathomable. LGBTQ folks are not just allies in the pro-choice cause. We should be invested as stakeholders in this fight. We directly benefit from abortion rights and we need to protect them.

Part of the reason I am involved in reproductive justice is to fight for a movement that is more inclusive to trans folks. One of the major ways to do this is to use gender neutral language in talking about reproductive rights. This is so important because it takes away any assumption you may have about a person and allows them the space to comfortably identify themselves. Implementing this in our healthcare system can start by simply providing more blank spaces on paperwork instead of check boxes. Give patients the autonomy to define themselves and the medical professional the tools to make their patient as comfortable as possible, in an already uncomfortable situation.

I am working on improving healthcare access in my community through my University LGBTQ Center's Trans 101 trainings for students, organizations, staff and faculty. Being invested in this movement gives me something to work towards -- a life where I don't have to fear being disrespected, harmed, or to have my bodily rights as a human being taken away from me. Defending abortion rights and preventing manipulative restrictions on abortion access is something that will benefit everyone, including those in the trans and queer communities. The queer rights movement and the abortion rights movement have the same goals of bodily autonomy and having the freedom to do what's right for themselves. That's what is at stake in the Supreme Court for millions, including people like me.

Nik Worstell is enrolled at The University of Cincinnati, studying Sociology and Women's, Gender, and Sexuality Studies. As a queer transman, Nik finds it important to focus his work on trans and queer inclusion within social and political movements. He is a founding executive board member of UC's Unite for Reproductive and Gender Equity chapter. URGE is a non-profit organization dedicated to the inclusion of intersecting identities within the reproductive justice movement, which gives Nik the platform to bring trans and queer inclusion to the table.

a youth-powered non-profit that advocates for sexual and reproductive justice for all.