Recently, the wife of a prominent Boston businessman -- one of my many wealthy, white patients at Massachusetts General Hospital -- greeted me this way: "So what foreign medical school did you go to anyway?"

For background, I'm a petite, Middle Eastern young woman with a headscarf, and I'm guessing I do not resemble her vision of what a doctor "should" look like. That image is probably taller, whiter, male and not Muslim.

My answer (in perfect, unaccented English) to her question about where I was trained? "Harvard Medical School." After that, her lips remained pursed shut for the rest of our encounter.

I thought that attending college and medical school at Yale and Harvard...would shield me from future experiences with racism and bigotry.

As the daughter of Iraqi and Iranian immigrants, such interactions unfortunately have been common for me and my family members since we moved to America weeks before 9/11. When former President Bush declared war on Iraq the following year, for example, my sister and I heard classmates scream, "Go back to your country!" from their pickup truck on our walk home from high school. 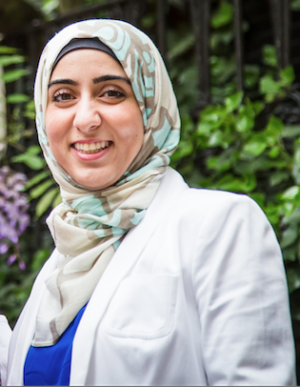 I thought that attending college and medical school at Yale and Harvard, respectively, would be my golden ticket to America's meritocratic dream, that my prestigious diplomas would shield me from future experiences with racism and bigotry. As a neurology medical resident in "liberal" Boston, (and working at a hospital ranked No. 1 by U.S. News & World Report) I also thought that I would be judged based on my medical acumen, not by the color of my skin or the scarf I wear on my head. But I was wrong.

Another time in the hospital, a male patient told me that his religion is superior to mine. While I was listening to his lungs to help in the management of his shortness of breath, he added, "Why do you wear that thing on your head anyway?" Despite his abrasive behavior, I politely informed him of his treatment plan and told him that I am praying for his speedy recovery.

Another day, an 80-year old patient with dementia began hitting me on the head when I checked in on her for my daily visit. Pointing to my headscarf, she said, "I don't want someone with that taking care of me." Despite her mental condition, the racism still stung as I continued to strive to provide her the best care possible.

As a neurology medical resident...I also thought that I would be judged based on my medical acumen, not by the color of my skin or the scarf I wear on my head. But I was wrong.

My experiences are not isolated. A recent study in the American Journal of Bioethics found that 24 percent of Muslim physicians have experienced religious discrimination in the workplace.

This election year has made it harder to be a Muslim in America. Republican front-runner Donald Trump has advocated for registering Muslims inside the United States and banning those of us who reside abroad. Unfortunately, the majority of Republican Party members agree with him and the number of hate crimes against Muslims have tripled in recent weeks. Yet, I also recognize that Muslims are just America's newest "outsiders." Throughout our history, Catholics, Irish, Italians, women, African-Americans, Jews, Latinos and gays have all been targets of nativist fear-mongering. Many of these groups still face significant prejudice today, and hospitals are not immune from such discrimination, whether implicit or explicit.

When I was a third-year medical student, it appeared to me that the pediatric residents and attending physicians would spend extra time caring for the white infants and children during morning rounds. The two African-American babies and one Arab infant admitted to the inpatient pediatrics service at the time were never "oohed and aahed" at and received noticeably less attention.

"Have you noticed that only the white children are called 'cute'?" I asked my friend after our third day on the pediatrics rotation. My friend, an African-American medical student, had his own grievance. He had overheard a doctor refer to an African-American father as an "angry black man."

"I don't understand," my friend said. "His daughter is dying, he is upset, and has questions. He's not asking any more questions than the other parents."

Our observations were also not isolated incidents. Multiple peer-reviewed studies have shown that physicians unconsciously prefer and spend more time with white patients than African-American ones.

My fight as a Muslim-American doctor to serve my patients without fear of racism, and the fight of an African-American patient to be treated with dignity...should also be your fights.

I also recall the occasional episode of overt racism in the hospital. One surgeon -- prominent and stern in his crisp white coat -- said the following about a Hispanic patient who was coming to have her melanoma examined for excision: "I can't believe these people! They have been here for a decade, can't bother to learn English, and we're stuck waiting for an interpreter."

But the episodes of implicit racism have been more commonplace.

Most episodes have gone unchallenged by my colleagues and me -- medical students and residents who have rarely felt empowered enough to speak up against older (and usually whiter) established faculty members and physicians.

Some hospitals and medical schools have attempted to address these problems by creating a diverse physician population that will hopefully someday reflect the ethnic, religious and racial makeup of our patients. However, this is not enough. At the same time, we -- as physicians and society more generally -- must realize that the struggles of one marginalized community are struggles of all of us.

My fight as a Muslim-American doctor to serve my patients without fear of racism, and the fight of an African-American patient to be treated with dignity and respect, should also be your fights. Our national conversation needs to be less disjointed: It is not about Tamir Rice or Eric Garner one minute, and Donald Trump's comments about Muslims or Latinos the next minute.

In medicine, I find, it is often easier to look outside, at global or national health disparities, for instance, rather than look within our own communities, and in our own hospitals. These disparities hurt patients and doctors, too: Personally, when I am confronted with bigotry on the job I figure out ways to ignore it, reminding myself how scared patients must be in a state of sickness and vulnerability in the hospital. However, I also wish there was more conversation about it among physicians because it is hard to deal with prejudice on a continual basis, and it only adds to the stress of our inherently rigorous training and profession.

Overall, it's about understanding that these challenges -- global and local -- are interconnected, and we will only be able to properly address the harmful prejudices in the medical profession, and throughout the United States, when we all come together and acknowledge each other's pain and America's pained history.

This post was originally published on WBUR. Photo courtesy of Dr. Altaf Saadi.