Note: I am presenting over half an hour of music in this video so if you wish to skip around in it, I have provided the time code for the beginnings of each segment. 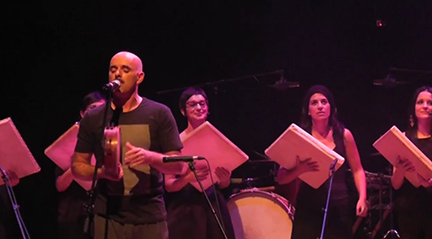 This past WOMEX was held in Santiago de Compostela in Galicia, Spain, a historic city and an important pilgrimage destination for Christians. The impressive cathedral houses the tomb of Saint James, and the Old Town is full of stores selling religious souvenirs and special confections (the sweet nut cakes were particularly delectable). At night the streets are full of students -- there is also a university -- and backpacking pilgrims of all ages. There are plenty of charming plazas and winding streets lined with cafés where one can linger over wine and tapas.

WOMEX always starts off with a gala evening event in which the host country presents a sampling of its musical culture. This year the program was produced by the virtuoso bagpiper Budiño. In case you are saying to yourself, "Whoa, back up! Bagpiper? A Spanish bagpiper??" I'll just say that Galicia has a venerable and ancient Celtic heritage that was wonderfully present that evening But not all acts were Galician Celtic. There was a healthy dose of Basque music, nuevo fado, timple from the Canary islands, and Flamenco jazz.

The evening opened with Mercedes Péon; a brave move, as she is for sure the most progressive of the artists presented. Having started out as a passionate folk revivalist (as you will see, she is also an accomplished bagpiper) she has gone on to incorporate electronica into her music, producing a sound that is bracing and rich.

03:38: From there the music transitioned into the delicately rippling notes of the timple (pronounced tim-play), a diminutive 5 stringed instrument intrinsic to music of the Canary Islands. Unlike the ukulele that it resembles, it has a full resonance despite its high timbre, possibly due to its rounded back. This was entrancing stuff, beautifully performed by Germán López with Antonio Toledo providing sensitive guitar accompaniment.

09:40: António Zambujo is one of the best known of the male Fado singers, and in the years since I first heard him he has become even more stylized, using extremely long held notes and adding ornament at the last moment. We tend to associate Fado with female singers, who interpret the repertoire very dramatically. By contrast Zambujo injects it with a caressing intimacy that we would normally associate with Brazilian singers such as Caetano Veloso.

12:35: Rather than present a straight flamenco act, (which again, shows adventurous programming) the next act was jazzer Jorge Pardo a player who plays flute and saxophone and who has forged a fusion with flamenco. He was accompanied by a trio that was equally infused.

18:14: Xabier Díaz is a fine singer and tambourine player and he opened his set with a haunting solo vocal with Gutier Alvarez on Zanfona (Hurdy Gurdy). But for his second number he brought out Adufieiras de Salitre, a twelve woman ensemble of singer/percussionists--and performed a number with them that brought the house down.

23:26: An ancient Basque instrument that is enjoying a revival is the Txalaparta (just pronounce the "x" as "ch"); a kind of percussion instrument that is always played by 2 persons or more. The music is played in hocket, and requires real teamwork. Oreka TX displays just this kind of joyful teamwork, and has even created variations of the original instrument, in this case replacing the traditional wooden slats for glass, giving the txalaparta a less percussive, more celestial sound.

27:00: The evening closed with a kind of bagpipe book-end. Budiño delivered a fiery dance set that let the audience know in no uncertain terms that Galician Celtic music was every bit as foot-tapping and soul stirring as that of its cousins across the water.