Sitting in my Jeep in a covered parking garage isn't my idea of people watching. It's A LOT creepy AND fishy if you ask me when people do that. But research is research and as a writer, I must go where the story takes me, right? Well today it took me to a covered parking garage outside of a high end retailer in Houston Texas. And along for the ride, somewhere in the world, were 30 voyeurs who paid to see a 35 minute sex filled matinee. A webcam streaming live via small cameras strategically placed in the E Class Mercedes facing me in the garage. A show that I was not privy to as I didn't stream what others paid for, but a show so quick like magic that if you blinked an eye, you'd miss each man enter and exit the Mercedes. Just shy of 3 men and thirty five minutes later, a petite busty brunette with a bright white smile walks over to me and says "Not bad for a couple of Accountants on their lunch hour!" as she perched herself on my lowered driver's side window. Not too many things shock or amaze me, but I do have to say that Natalie and Sasha servicing 3 men in record time did make me smirk my smile, squint my eyes and nod my head slowly up and down in an "Aha" moment.

Natalie and Sasha, whose names have been changed to protect their identity, are mobile sex providers and today, they've collaboratively killed 33 birds with one stone in 35 minutes. Their first client, a man in his early 50's in a dark blue suit, then 2 thirty something men with laminated picture badges hanging from lanyards along with 30 people watching the show provided by small cameras. Those were the 33 birds. Thirty three birds who each paid $200 to participate in a show that started promptly at 11 am netting Sasha and Natalie $6600. In 35 minutes.

"Food trucks are a huge business right? It was a GENIUS idea to get great tasting food on the go that IS STILL fast food, but QUALITY fast food. That's HOW Sasha and I came up with this idea for Mobile Concubines." Mobile Concubines, or as Sasha likes to refer to themselves as "Working Girls", is a service they provide in the locale of your choice for a flat fee. "We only accept PayPal. It's THE safest way to transfer money and if you have the app on your phone, it's the quickest."

"So walk me through HOW sex in a mall parking garage is orchestrated" I ask. "Well, we service both men and women who are within 2000 feet of one another at any point of the day. Take for instance the first man. When he paid his fee last night, his text said he would be Christmas shopping in the Galleria and would be done by 11 am. It so happened that there were 2 Engineers from across the Skywalk who also paid for our services. It was convenient timing and placement for everyone. Everything is communicated via text. When we arrive, where we're located, make and model of what we're in and what time they're scheduled for. Voyeurs get an alert on their phone with a count down before we go live in a session. And payment is mandatory 24 hours in advance." Natalie says that they also have a Dynamax Super C RV that they drive, "but there's no way it would fit in this garage" so they opted for the Mercedes. "Besides" says Sasha, "Leather seats are perfect for cleanup and there's nothing like leather on a bare ass, especially in a Mercedes."

So many questions running through my mind, with the obvious one being did the men they serviced separately know they weren't in a private session. Isn't that an invasion of their privacy if they didn't know? "We aren't always in an on-camera session, so when we plan to, we advertise what those days will be. Clients wanting to be a part of that sign a non-disclosure form to protect both parties. So yes, our first 3 clients today knew their exposed lower halves would be on camera. The lipstick cameras, which are called this in reference to their size, are actually positioned so they only get the action from the waist down as well as a side angle so our faces are what our audience see's, not the clients we're servicing."

But aren't they afraid someone may see them? Get arrested? Do they at least clean up after every customer? Wipes, do they carry wipes? Do they brush their teeth in between sessions? What about STD's? And the M&M's, that's a genius idea in itself!

" Seriously? Of course we clean ourselves after EVERY client Lisi! We have flushable moist wipes and paper towels to dry ourselves with as well as tooth brushes and toothpaste to freshen up before our next client. We're fresh and clean as daisies! Natalie and I take turns so one of us is always on the lookout since we're literally out in the open. Unless we're in the RV which is equipped with outside cameras. As far as anyone seeing us, it has happened a few times but we're so efficient that before the police show up we're gone! Our clients submit screen tests to our sites so we know they're safe for us to work with and no to your last question, neither of us have ever been arrested!"

Sasha says that "10 years ago when we were fresh out of college, we worked for the same Oil and Gas firm as Accountants." Bored with their careers, they talked about a startup in the adult toy industry "But that costs money so we decided to do this for a while and save as much as we could" says Natalie. They say that they "research what works and what doesn't so we can eventually market adult toys we have designed and have a pending patent for." I have another "Aha" moment. These aren't just party girls, they're business women looking to the future.

Does the future include romance or is romance in their present? If so, do their significant others know about their mobile profession?

"Neither of us are romantically involved at the moment, there's absolutely no time! We each know what we want in a man though! The type of man we each see ourselves with would NOT be someone doing what our clients do on their lunch hours!" Both women say that since most of their clients come in for "quickies", their wives and girlfriends would be hard pressed to find out their man is cheating. "Yes" says Sasha, "this is cheating, but their wives and girlfriends don't have anything to worry about. Our clients only want us for what we quickly provide, this isn't an emotional investment like an affair is."

Moving on to their next location after lunch, my last questions are how much they make in a day, do they split the money 50/50 and what they do on their off time. "It's never less than$10k a day and we work 4 to 5 days a week 3 to 4 hours a day. Yes we split the money 50/50 and believe it or not, we're both getting our Masters degrees from separate online Universities." Natalie says that continuing her education in Psychology will give her insight into how the human mind works and Sasha says she is studying for her Masters in Business. Two degrees that seem tailored made for the adult toy industry.

I leave Sasha and Natalie with my own sense of amazement and feeling shocked as there is clearly more to them than meets the eye. You live another day and you learn something new and today I discovered a few things that have shocked and amazed me. Who knew? I sure didn't. 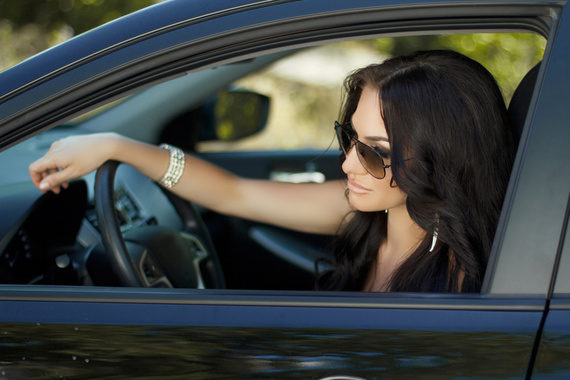