"Why don't you call me anymore?" she asks on the phone, her voice plaintive, barely above a whisper. "No one remembers me, no one cares if I died."

It happened. She just no longer can recall.

Five years ago, my mother, who is now 81, was diagnosed with Alzheimer's, and her short-term memories are almost non-existent. Unless something very dramatic -- death, divorce, accidents, and marriages -- happens to those very dear to her she retains nothing of the immediate past. She has, too, become paranoid and housebound, and the once vivacious, outgoing and beautiful woman has become frail and depressed. Though my two older siblings and I visit my parents in Fremont practically every week, as we all live in the Bay Area, my mother nevertheless feels isolated and confused due to her increasing dementia. 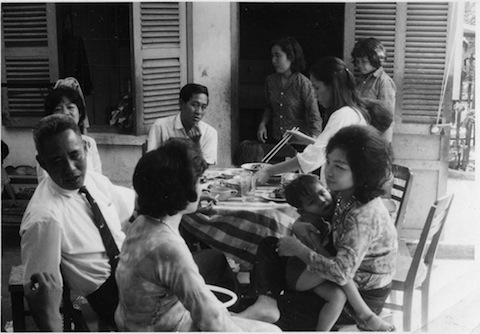 But when it comes to the distant past, and especially when it involves cooking, it is another story altogether. "Mother," I say toher on the phone, changing the subject. "How do you make banh tom co ngu?" It's a Vietnamese fried shrimp cake made with yam. "Well," she responds with no hesitation, "you need both rice powder and starch. You need to make sure it's of equal part and the shrimp you keep the head, that's the best part. You need to have good, light oil." She rattles off the recipe with increasing confidence. "Be careful, if you use too much starch, it doesn't get crunchy."

I already know how to make banh tom co ngu. In fact, I learned dozens of dishes from her by simply watching or listening and occasionally assisting her in the kitchen over the years. I asked because I simply wanted to hear her talk with confidence, to have her in her element, and not in her self-pitying voice when that dominates her outlook in old age -- a mother abandoned. 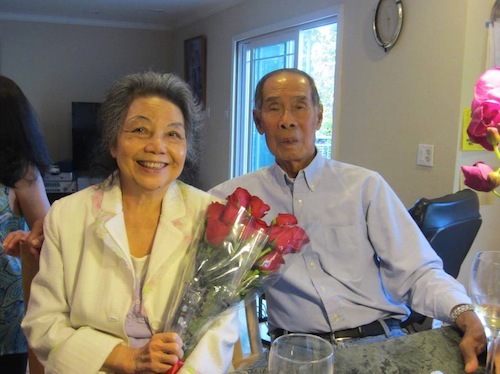 I want my mother, that is, at her best: cooking and providing for her family.

Indeed, ever since I can remember, there was some sort of party or another every week in our house during the war in Vietnam. My father, a high-ranking army officer in the ARVN (Army Republic of Vietnam), always had important guests at our house. Since I was four, I remember Vietnamese ministers, generals, visiting dignitaries, and yes, even American stars -- Robert Mitchum and John Wayne and Jennifer Jones -- had graced our dining tables during the Vietnam War. And Mother -- with the help of servants -- would always be cooking, and entertaining Father's guests. There was a war going on, but people were caring and the kitchen was always crowded with people.

Or else, it's birthdays and death anniversaries, or Vietnamese Lunar New Year or Christmas Eve, where mother's tireless cooking made our lives luxurious, celebratory, comfortable. And I remember often waking up with the sounds of pots and pans clanging and the chopping on the cutting board down in the kitchen, and on the weekend, the delicious aroma of mother's pho soup or bun bo hue, a spicy pork knuckle soup in beef and lemongrass broth, would infuse the entire house.

The dishes could be elaborate. There's the fish dip that is she made of sea bass and dills and celery and homemade aioli, to be eaten with shrimp crackers or fried bread. The steamed fish head and tail are retained, but its body is made entirely of fish dip mixed with aioli, its scales made of colorful carrots and beet. Then there's that special gourd and mushroom soup, which is served in an actual gourd. There's also the grilled crab cake that's served in its shell.

Mother was tireless in her creation. Later on, her repertoire expanded to include Moroccan couscous, French bouillabaisse, Spanish paella, and when she couldn't find key ingredients, she found substitutes -- turmeric for saffron, homemade sausage for Chorizo, and shitake for porcini. 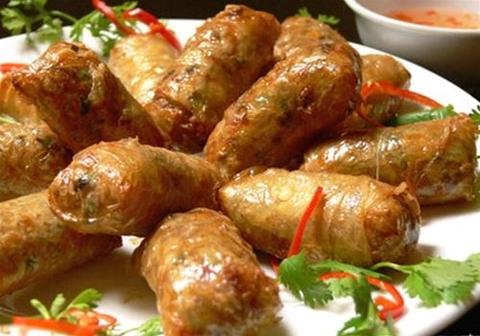 In Dalat, Vietnam, that French-built hillside station full of Lycee and villas, where we lived for 5 years, she taught a free pastry class, showing our neighbors how to make pate chaud, choux a la creme, eclaire, buche de noel. My mother was mostly a self-taught chef, though due to father's many foreign guests, she later took cooking classes with some of the best chefs in Saigon to expand her repertoire.

It is a sad thing therefore to see her so frail and forgetful and depressed, and no longer capable of cooking. She can barely make rice and heat soup.

"I don't know what happened," she said one day when I came to visit and wanted to cook for my parents. "Someone stole all my knives."

I kept searching and finally found three knives hidden under the sofa's cushions. It was depressing: Her fear of robbers and thieves is overwhelming her, to the point where she feels the need to defend herself with the knives she once used to create such fabulous, sumptuous meals. 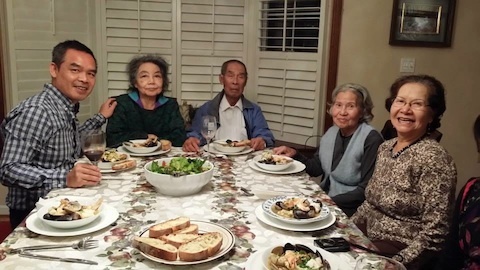 For an appetizer, I make cha gio, the classic Vietnamese spring roll. I mix pork with fish sauce, black pepper, wood ear mushroom, crabmeat, green onion, and vermicelli. I bring out rice papers and warm water. "Let me help," she says. She gets up from the sofa where she often lies listless, watching Korean soap operas.

Though she could never cook an entire meal again, she is her old self as she works. The bony fingers are guided by muscle memories. And as she rolls her spring rolls -- a scoop of mixed ground pork with crabmeat, a wet rice paper -- she begins to remember. "Back when we were in Hue, I remember making dinner for 25 guests," she says. "Mrs. Ngoc, she would send her daughters. My gosh, that woman had six of them. And they all worked so hard." Mother starts laughing. 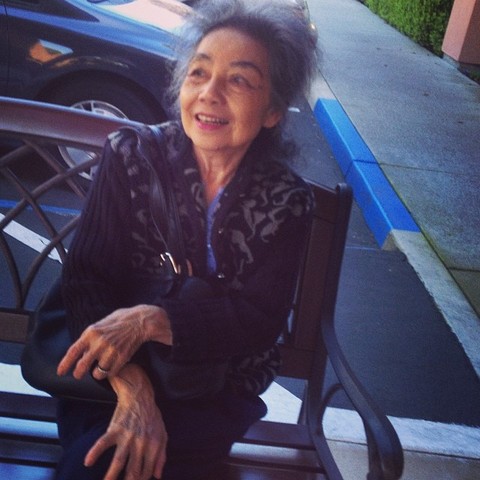 I encourage her. I give her more rice papers. And we roll cha gio together. We make more than we could possibly eat. But it doesn't matter. We roll back the clock. We talk about food, cooking.

We talk about the past.

Andrew Lam is an editor with New America Media and author of the "Perfume Dreams: Reflections on the Vietnamese Diaspora," and "East Eats West: Writing in Two Hemispheres." His latest book is "Birds of Paradise Lost," a short story collection, was published in 2013 and won a Pen/Josephine Miles Literary Award in 2014 and a finalist for the California Book Award and shortlisted for the William Saroyan International Prize for Writing.

This story is a part of Off the Menu: Asian America, a multimedia project between the Center for Asian American Media and KQED, featuring a one-hour PBS primetime special by award-winning filmmaker Grace Lee (American Revolutionary: The Evolution of Grace Lee Boggs), original stories and web content.