Definition of "Weasel Room": Using specific terms, words or phrases with 'selective' accounting to distort, puff up or obfuscate the facts. 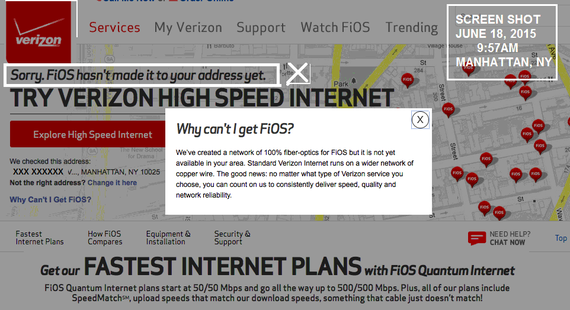 By July 2014, 100 percent of New York City's residential households should have been able to get FiOS cable service delivered over a fiber optic wire that was supposed to replace the aging copper-based infrastructure. And in our previous article we discussed the gaps in Verizon's New York City and NY State's fiber optic deployments.

Verizon has about 45-60 percent of New York City covered, depending on which 'weasel room' metric and accounting you decide to apply. So it is no surprise that the City found gaps in deployment. On June 18, 2015, a new audit report examining Verizon's FiOS roll out has come out and it's a page turner.

"The findings of this audit, are that Verizon claimed households as 'passed' with fiber optic cable before the necessary fiber connections to the block containing those households were made; that Verizon systematically refused to accept orders for residential service, not only before it had 'passed' a household but even well after it claimed it had passed a household...and Verizon provided the public with misleading information with regard to Verizon's obligations.

I'll get back to this in a moment.

Why Bother with the Facts.

The one thing the audit report didn't do is to review just how far off Verizon's deployment plan has to be, as told by their own accounting. Yet, Verizon claims that they completed 100 percent. Let me walk you through these numbers. 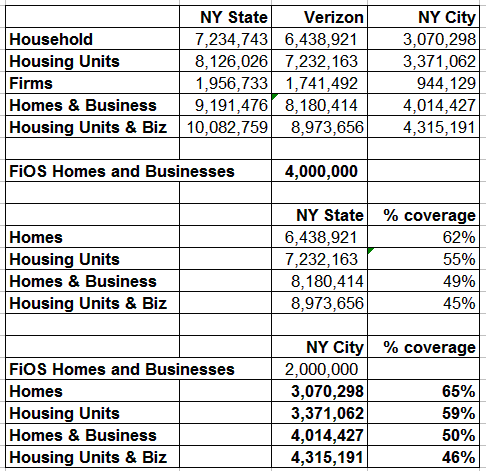 1) First, Verizon's own press release claimed that it had "more than 4 million homes and businesses" in New York State at the end of 2014, which, last I heard, included New York City.

"Fiber-optic networks strengthen communities, and last year Verizon continued deployment of its 100 percent fiber-optic network, with its FiOS TV and FiOS Internet services. At year's end, FiOS services were available to more than 4 million New York and Connecticut homes and businesses. Verizon has placed more than 161 million feet of fiber optic cables in the two states."

2) We used raw Census information about the "housing units", "households", and "businesses" in New York State and New York City, as each term varies the outcome.

The quote from Verizon is for 'homes and businesses', while the New York City franchise appears to use "households" in some places, but in other places uses "residential dwelling units", (though the audit discussion with the City appears to focus on 'households').

But note that this quote from the original agreement indicates the deal was for 'residential dwelling units'.

Also, the Verizon NYC FiOS franchise does not include commercial businesses, a really bad mistake by the previous Bloomberg administration that negotiated this deal.

3) Next, we needed to know how much of New York State does Verizon cover. Using FCC supplied data -- Verizon controls about 89 percent of the State as the incumbent phone company.

4) However, Verizon has 100 percent of New York City's telecommunications as the incumbent phone company.

Using Only "Homes":
a)If Verizon has 4 million homes and businesses;
b)There are 6.4 million households covered by Verizon in New York State, and if
c) ½ of the deployments are upstate and the other half are in NY City, (as told by other NYC data)
d) Then, Verizon can only have 2 million households covered in New York City.
e)Census tells us that New York City has 3 million homes.
f) 65 percent coverage -- at best. However, this doesn't include the 'businesses', so it's inflated.

But the numbers go downhill from here as the audit pointed out gaps and holes in a Swiss cheese landscape.

Some Quotes from the Audit

"Although Verizon claims it 'passed' all residential premises, Verizon still does not accept orders from all City residents.
.
"Field inspections conducted parallel with this audit confirm that a subset of the blocks that Verizon claims to have passed also have no facilities installed on the block.

"Verizon failed to cooperate fully and timely with DoITT's audit in violation of Section 11.1of the franchise agreement.

"Verizon does not communicate accurately and effectively with prospective customers."

One has only to look at the litany of issues to grok what the term "weasel room" really means... it means, while the contract and intent is for "ALL residential dwelling units", the company will short change the accounting at every turn -- the wire is down the block, the wire is going to be put in soon, we don't have to go into the building, just 'pass it' or -- We are thinking about putting in the wire, so that's good enough.

And this has been the situation with ALL broadband accounting in the US, not just Verizon, but AT&T and Centurylink, as we've pointed out over and over, including in "The Book of Broken Promises" and the two books that preceded it.

Verizon, of course, is attempting to put the blame on anyone else but themselves. Many of the articles coming out quote Verizon, who claims that the City's audit is timed to the telecommunications unions' (CWA and IBEW) negotiations for a new contract. I'm not a member of the union and I've been writing about this problem for a decade+. The only 'timing issue' is -- why did it take the City so long to do something, though the former administration under Bloomberg just rubber stamped everything. More to the point, the unions are correct -- staff cuts and a massive financial shell game have harmed New York's telecommunications infrastructure and New York City residents' ability to get upgraded services that Verizon phone customers paid for over and over and over.

This is my favorite quote from Verizon's response. We will be addressing the construction budgets of Verizon NY in the next few articles -- as it would appear Verizon charged local phone customers for this fiber optic network that many can't get.

"Verizon has spent in excess of $3.5 billion to build a robust fiber-optic network throughout the five boroughs of the City, a project that entailed the installation of over 15,000 miles of fiber-optic distribution cable, much of it underground."