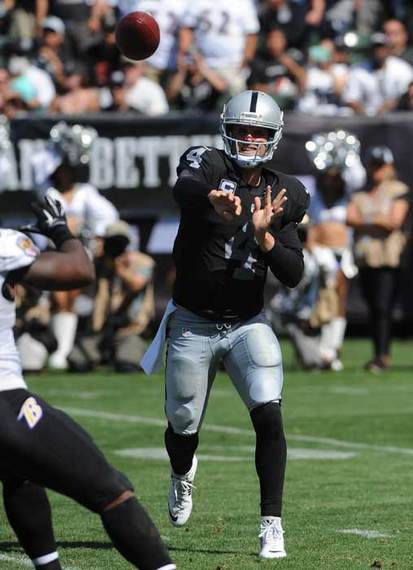 It was an amazing performance by Derek Carr who left last week's game early in the second quarter with a hand injury. In the final minutes of regulation, Carr threw a 12-yard touchdown pass to Seth Roberts and led the Raiders to a 37-33 victory over the Baltimore Ravens.

It was a phenomenal win for the Raiders, especially after losing their home opener to the Cincinnati Bengals 33-13 last week. Oakland looked like a playoff team. Carr looked sharp and performed at a high level. He threw a career-high 351 yards and three touchdowns.

"We had a big jump from week one to week two, we did," said Carr. "We're heading the right way and we just got to keep doing it. After last week, it's probably easy for guys to say man, here we go again but we didn't because it's not like that way anymore. It's a new team."

Carr unable to capitalize off the turnover, set up Sebastian Janikowski's 23-yard field goal extending their lead 10-0. The Ravens were forced to kick a 22-yard field goal in in the first due to a smothering Raiders defense. But the penalties took the momentum away from Oakland, allowing Baltimore to get back in the game. 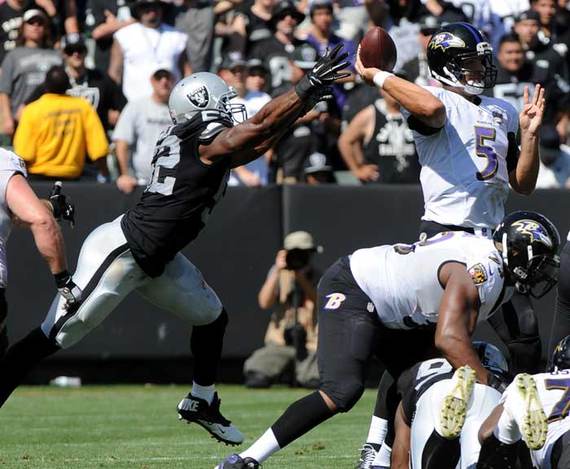 Joe Flacco's 26-yard touchdown pass to Crockett Gillmore tied the game 10-10 to end the first quarter. Carr and his offense responded quickly. He found Andre Holmes who got sandwiched between two defenders for a 21-yard pass, that set up Latavius Murray's 1-yard touchdown making it a 17-10 game to start the second.

"We have people that can get down the field," said Raiders head coach Jack Del Rio. "We have a quarterback that's very accurate down the field. That's a really physical front, a physical defense that we went against today, and our offense was terrific for most of the day."

The Ravens tied the game 17-17 when Flacco connected with Gillmore for a 9-yard touchdown, his second of the day. Gillmore broke through tackles carrying two defenders as he pushed his way into the end zone. But a pair of field goals from both kickers tied the game again 20-20 to end the half.

Janikowski kicked a 48-yard field goal to start the third quarter. Carr later made a gutsy throw to Crabtree for a 24-yard touchdown who had triple coverage. Oakland reached 30 points through three quarters for the third time since 2004 (31 points vs. Kansas City on December 15, 2013 and 59 points vs. Denver on October 24, 2010). 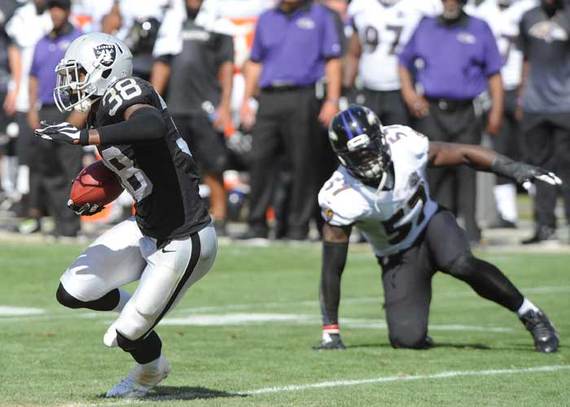 "They [Raiders] had us off balance the whole game," Baltimore head coach John Harbaugh said. "They ran it out, they spread us out, tightened up a little bit, threw those screens out to get yards, made us miss tackles, made big plays in the first half, had a couple of double moves and threw it over our head."

The Ravens unraveled in the late in the fourth. Flacco's pass to Steve Smith Jr. who had 10 catches for 150 yards was over thrown before Tucker's field goal that gave Baltimore a 33-30 lead with 2:10 left in the game. Carr found Roberts for the 12-yard touchdown pass with 26 seconds left on the clock.

Neiko Thorpe sealed the win when he intercepted Flacco's pass. Del Rio got his first win. An outstanding finish by the Raiders who had two players record 100+ yards receiving for the first time since 2011 when the dynamic duo of Denarius Moore and Darrius Heyward-Bey did it. Cooper had seven catches for 109 yards and Crabtree had nine catches for 111 yards.

"It was a good team win," Crabtree said. "It's one game and we have 14 more so it's really how we respond after this game. We worked hard through OTA's, Training Camp and practice. It's really time to put it together on Sundays and that's what we did today. Hard fought game."