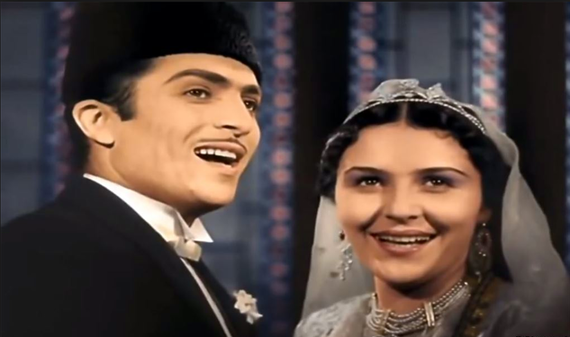 Uzeyir Hajibeyov is considered the father of Azerbajiani classical and operatic music and composed the first operetta ever produced in the Muslim world. Hajibeyov, who was born in 1885, lived through a turbulent time in the history of this nation in the Caucasus region, at the crossroads of Eastern Europe and Western Asia.

After Hajibeyov was born, Azerbajian was ruled for over a hundred years first by the Ottomans, then by the Russian Czar and finally by the Soviet Union, except for a brief period of independence from 1918-1920, when it was a secular Muslim republic, and the first to grant female suffrage -- even before many Western countries.

Hajibeyov's most famous musical operetta The Cloth Peddler (Arshin Mal Alan), first performed on stage in 1913 and later produced in 1945 as a film starring the famous actor Rashid Behbudov, became an international success. The Cloth Peddler is the story of a wealthy young man who decides to flaunt tradition by actually meeting and falling in love with his bride before their wedding day. With a friend, he hatches a scheme to disguise himself as a cloth peddler and scout out eligible young women. He soon meets and falls in love with the daughter of a nobleman and the inevitable complications ensue.

The opera was controversial -- and therefore popular -- for many reasons. The story attacks the traditional notions of arranged marriage, as well as the role of women in society and in their own homes. It also starkly portrays class differences, but always in a light-hearted way. More significantly, Hajibeyov integrates Western and Eastern musical traditions in an innovative and accessible way, at a time when Russian-influenced composers decried the use of traditional instruments or music of the Caucasus.

The 1945 film, which was shot in black-and-white in the midst of Soviet engagement in World War II -- has been painstakingly re-mastered and colorized, and had its premiere this week Hollywood. The film continues to have strong resonance eighty years later as a young couple in love struggles to break the bounds of tradition and embrace the ideal of romantic love. In our current global conversation about secular and traditional values, The Cloth Peddler provides both a delightful and thought-provoking addition to the conversation.