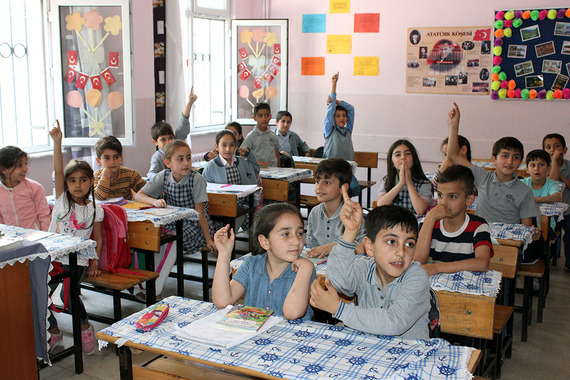 Turkey has taken in more Syrian refugee children than any other country - more than 700,000 of them. But 400,000 are out of school and a lack of funding means they will still be shut out of the education system when the new school year starts in less than 100 days.

Today the Foreign Affairs Minister of Turkey, Mevlut Cavusoglu will be in Brussels for talks with EU Commission Vice-President Frans Timmermans, where they will discuss crucially important funding issues as part of a new chapter in EU talks.

Global education campaign movement A World at School is today calling on the European Union to urgently release funds to help Turkey get those Syrian girls and boys into school and learning. If not, they will be at risk of risk of child labour, trafficking, early marriage and being exploited and vulnerable to extremism.

In the face of what many would see as an overwhelming challenge the Government of Turkey has provided schools places for Syrian children and committed to providing more school places when promised funds from outside Turkey are available. And promises have been made.

World leaders met in London in February at the Syria Pledging Conference and promised to get 1 million Syrian children in school this academic year starting within a few months. In April, the EU pledged €3 billion ($3.4 billion) to support Syrian refugees in Turkey, and education has been listed as a top priority - a mark of recognition for all those who fought to bring the issue to the table. But since the promise was made only €27 million has gone to education, leaving the future of hundreds of thousands of Syrian children at risk.

Some young people have been out of school for over five years, including vulnerable adolescents now in their teenage years who were just children when they arrived. This is a crucially underserved population. Children out of school are at risk of child labour, trafficking, early marriage and being exploited and vulnerable to extremism.

I was reminded again of this plight today when listening to a BBC news report about 12 year old Lima from from the Syrian capital, Damascus. She started work in a textile factory, when she was only nine, and missed three years of school. She is now one of the children in school and learning during the last academic school year.

To provide hope in the region, we need to transform the lives of refugee children and avoid a lost generation. There is an efficient, cost-effective and scalable model to open school places for Syrian children, using double-shift schools and other methods. One barrier to securing these school places is finance.

Traditionally aid has been about the basic minimums of food, shelter and safety. However the average length of time a child is a refugee is between 10 and 17 years, so it is clear that humanitarian aid needs to do far more, it must provide children with a safe school, a future and hope.

Host countries like Turkey stand ready to implement this huge undertaking; but it is up to all of us to ensure that the promised funds are delivered in time. Today's meeting in Brussels must be another step closer to that goal.

Ben Hewitt is Director of Campaigns for children's charity Theirworld. Funding from the Hilton Foundation has enabled Theirworld to expand its education work in Turkey where it is working alongside government, international agencies and local organisations to find sustainable solutions for the refugee education crisis.