About three years ago, I wrote an open letter in HuffPost -- "Dear Telecom Unions: Time to Fight for the Public Network Infrastructure -- The State-based Utility Wires"

The trend lines we see today had already taken hold, and over the last three years a plan that was harmful, not simply to the unions, but to towns and cities throughout the U.S., not to mention everyone reading this who pays and uses a telecommunications service -- got worse -- and we can't blame the unions.

Essentially, Verizon and AT&T are now "wireless first," entertainment companies and they do not care about the wires (except for their own use) or their local customers. Their plan has been a movement to shut down whole areas of the U.S. incumbent state-based utilities, and force-march, 'migrate', customers onto their wireless -- and, of course, get rid of the unions, and all regulations and obligations. And they have created multiple 'reasons' to do this from the "IP Transition" (a serious con job) or that the networks are not profitable, (they are) -- in short, a 'say anything' approach to accomplish their plan.

Using these excuses, Verizon has not been properly upgrading whole areas of their territories and cities; they have been eliminating jobs as 'productivity gains', a euphemism to cut staff, especially union jobs, and they have let the utility copper networks deteriorate.

Whether you do or do not care about unions or their members, this is more about a plan by Verizon to eliminate expenses and the networks that they don't want to maintain or even upgrade, even though you paid for that to happen multiple times.

And, like that old practice of having a canary in the coal mine to test the air, the unions and the outcome are an indicator of the future.

I don't agree with various parts of the unions' public policies, but, truth be told, the unions have become some of the most important advocates for getting America upgraded and keeping the networks maintained.

The press release announcing the strike included this:

"Verizon workers, who are ready to help install promised FiOS lines, the high-speed broadband service, are also frustrated with the company's delay in providing the much needed service to customers. For years, Verizon has been cutting vital staff -- it has nearly 40 percent fewer workers now than a decade ago -- and has failed to hire the personnel necessary to properly roll out the service.

And I've been ranting, cajoling, or even pontificating in my postings to call attention to the total failure of Verizon to fulfill its commitments to upgrade the East Coast of America.

In fact, I've been writing about this for decades -- ever since I found that my then-clients - the phone companies, had changed state laws in the early 1990's to rewire their territories by 2010 with fiber optics -- and I knew that the analyses used to change these laws were not even close to being accurate -- they just wanted less regulation and more profits.

This cost each household about $4,000-$5,000, but that's the low number based on the revelations of the last few years pertaining to the massive cross-subsidy scheme.

America should have been a fully fiberized nation by 2010. We paid collectively over $400 billion, and that's the low number. We are not Number 1 or even in the Top 20 according to most international accounts.

See the "Book of Broken Promises" for details.

And instead, in interviews with Verizon CWA and IBEW staff, I found out that much of the capital expenditures that should have used to do these replacements of the copper wires were moved to build the wires-to-the-cell towers for Verizon Wireless. Some installers told me that in their more rural towns there are central offices actually in the town that weren't 'lit up' for deployment, and some actually live in these communities -- and can't get service from their own company.

And we also were told about the extensive deterioration and lack of maintenance of the networks.

But this wasn't news to me. In a presentation in front of the New York City Council in 2002, I detailed the deteriorating networks, based on a report by CWA, filed with the NY State Public Service Commission, and other data.

So, it isn't simply their self interest that I care about. When the wires are not being replaced and properly maintained, while it impacts their jobs - it directly impacts most customers; there are no high-speed networks to compete with the only other wire, the cable wire, and there is no serious competition to lower prices, and there are economic harms to these cities.

As I documented, like a broken record, Verizon, the 'wireless first' company,

And it has been the unions, above any other group, that has attempted to stop and/or expose these issues.

And why? Well, self preservation. The unions' fate are tied to the wires, so shutting off the wires helps to shut down the unions' future.

But there is something much more profound -- these are the state utility networks that are being dismantled and parts of them are being moved and considered private property for 'personal' use--even though customers have been and continue to be defacto investors as the networks are used as a bank account - to drain.

Moreover, Verizon doesn't care about the local customer. It has been, in fact, throwing customers to the cable companies--and even has a deal with some of them to bundle Verizon Wireless with their cable bundle where they haven't upgraded the networks.

Worse, Verizon's focus is now - Well, we should be an entertainment company. They purchased AOL, (which also owns Huffington Post) and the recent rumor is that Verizon wants to buy Yahoo, the search and Internet company, and this would include Yahoo Japan.

Exactly how does having the incumbent phone utility cross-subsidize other lines of business that have nothing to do with infrastructure? It doesn't.

The unions have other issues, such as off-shoring of jobs, where the company has started having calls handled overseas, but truth be told, it has been the massive decreases in staffing that has taken its toll on America's infrastructure.

In 2009, New Networks Institute published: "25 Year Analysis of Key Financial Indicators for the Bell Companies" - AT&T, Verizon and CenturyLink". In hard numbers, the revenues of these companies had increased 220%, but the total number of employees had not tracked with revenues, but had dropped 25%. However, an estimated 70% of 'employees-per-line', i.e., the staff to handle the network upgrades and maintenance, had been sliced and diced. 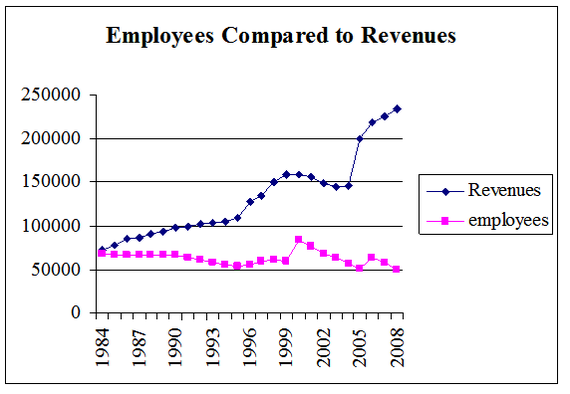 The CWA press release states that the number of union employees went down 40% more from 2006-2016.

"For years, Verizon has been cutting vital staff -- it has nearly 40 percent fewer workers now than a decade ago -- and has failed to hire the personnel necessary to properly roll out the service."

And while all companies want to get productivity gains, Verizon is not 'all companies'. It controls the East Coast of America state-based utilities which controls critical infrastructure. And, as we showed, now, in three books, the company failed to properly upgrade and maintain the networks and has and wants to keep putting its money into other lines of business - and charging local phone customers for this privilege.

Buying AOL and now discussing Yahoo, including Yahoo Japan, and working to get rid of unions and the staff required to build out the networks -- is wrong.

So, whether you are pro or con the unions, with purely self-interested reasoning that America should have the best infrastructure in the world, that the networks shouldn't be deteriorating and everyone should have really high speeds and robust competition -- bringing lower prices -- because we already paid for this...

What happens with this strike and the unions matters, greatly.