(Filed as comments in the Net Neutrality proceedings)

While Verizon has continuously told anyone who will listen that using the Title II classification for its broadband networks would harm innovation and investment, Verizon appears to have failed to disclose a basic fact to regulators and the courts:

FiOS uses a FTTP, 'fiber to the premises' network which has been based on the Title II, common carriage, telecommunications classification for about a decade. Why? Title II gives Verizon the ability to use the existing telecommunications rights of way, but it also has allowed Verizon to use basic phone customers as defacto investors through multiple rate increases to fund this FTTP network, which we documented in New York State. See our report: 'It's All Interconnected" (which we have also filed in this proceeding.)

Here are quotes from some of Verizon's cable franchises in Massachusetts, Pennsylvania, Maryland, Florida, New Jersey, District of Columbia and New York. However, we believe this is happening in every Verizon territory.

IMPORTANT: Verizon has never revealed to the FCC that their premier fiber optic-based FiOS service is already using the Title II classification in any documents, filings or comments we could find, nor anything submitted to or in front of the US courts, including the recent case against the FCC.

We question whether the Court would have made the same verdict if they were informed that Verizon, while telling the court one thing, was in reality using Title II in every state and in every FTTP deployment, not to mention the ease of charging basic rate customers for the construction of the FTTP networks. 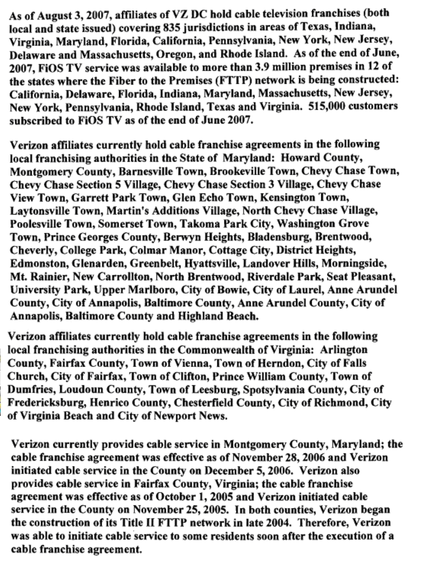 "SYSTEM OPERATION. The parties recognize that Franchisee's FTTP Network is being constructed and will be operated and maintained as an upgrade to and/or extension of its existing Telecommunications Facilities. The parties agree that the LFA cannot assert authority pursuant to this Agreement over Franchisee's FTTP Network, except to the extent such facilities, if any, are used exclusively to provide Cable Service and are located in the Public Rights-of-Way.

2.2 LFA Does Not Regulate Telecommunications: The LFA's regulatory authority under Title VI of the Communications Act and this Agreement is not applicable to the construction, installation, maintenance or operation of the Franchisee's FTTP Network to the extent the FTTP Network is constructed, installed, maintained or operated for the purpose of upgrading and/or extending Verizon's existing Telecommunications Facilities for the provision of Non-Cable Services.

"Pursuant to the NJSA 45:5A-15, telecommunication service providers currently authorized to provide service in New Jersey do not require approval to upgrade their facilities for the provision of cable television service.

"As such any construction being performed in the public rights of way is being undertaken pursuant to Verizon NJ authority as a telecommunication service provider."