The world lost a brilliant, inspiring, and visionary teacher, speaker, and author yesterday, but heaven gained a new angel.

Dr. Wayne Dyer made it clear that in his own beliefs, leaving this place called earth for a new destination was a "transition." His family posted in social media that: "Wayne has left his body, passing away through the night. He always said he couldn't wait for this next adventure to begin and had no fear of dying. "

In his time here, he often stressed that much of of what we hold on to in our human lives -- in our minds and materially -- won't mean much on the other side.

His famous quotes appear on his Facebook and Twitter feed daily. On August 27, three days before his passing, he posted a meme that read: "I have a suit in my closet with the pocket cut out. It's a reminder to me that I won't be taking anything with me. The last I wear won't need any pockets."

Maybe it was randomly scheduled on Facebook by an assistant, or by maybe by Dr. Dyer. Perhaps he knew or his soul that we would all need to read it to help us look at his death through our spiritual eyes.

Losing someone who has touched so many is hard and shocking to those left behind. But he left us with so many inspiring thoughts and so much wisdom. One thing many will agree on is this famous quote from Dr. Dyer: "Love is my gift to the world. I fill myself with love, and I send that love out into the world."

When words came out of his mouth or showed up in his books or on his Facebook page and around the Internet, so many people were inspired to think: Yes, I want to believe this... I want to change the way I see my world... I can do this. I know I always felt that way listening to him speak or reading his words.

Dr. Wayne W. Dyer gave so many people HOPE and helped them put on their spiritual thinking caps and soulful glasses so they could view their world in a new, more positive way.

Here are some of my favorite Dr. Wayne Dyer inspiring quotes about following your dreams and living life to the fullest. Maybe, just maybe, they will be just what you needed to hear today. 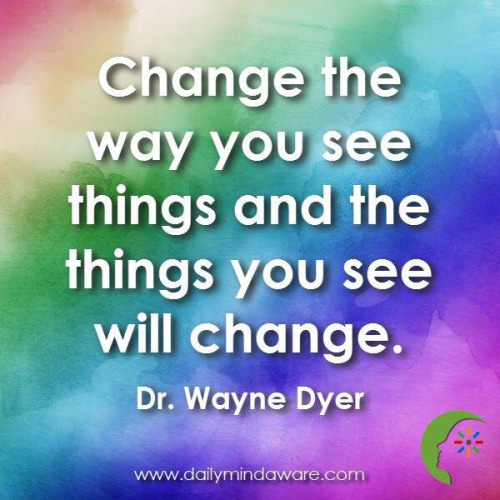 "You must become the producer, director and actor in the unfolding story of your life." -- Wayne Dyer

"Doing what you love is the cornerstone of having abundance in your life." -- Wayne Dyer

"There is no scarcity of opportunity to make a living at what you love; there's only scarcity of resolve to make it happen." -- Wayne Dyer

"Passion is a feeling that tells you: this is the right thing to do. Nothing can stand in my way. It doesn't matter what anyone else says. This feeling is so good that it cannot be ignored. I'm going to follow my bliss and act upon this glorious sensation of joy." -- Wayne Dyer

"Change the way you look at things and the things you look at will change." -- Wayne Dyer

"What we think determines what happens to us, so if we want to change our lives, we need to stretch our minds." -- Wayne Dyer

"The more you see yourself as what you'd like to become, and act as if what you want is already there, the more you'll activate those dormant forces that will collaborate to transform your dream into your reality." -- Wayne Dyer

"Begin with the end in mind. Start with the end outcome and work backwards to make your dream possible." -- Wayne Dyer

"A belief system is nothing more than a thought you've thought over and over again." -- Wayne Dyer

"There is one grand lie -- that we are limited. The only limits we have are the limits we believe." -- Wayne Dyer

"Society demands conformity at the expense of individual liberty. Let us be for once a non-conformist to be fully alive." -- Wayne Dyer

"You leave old habits behind by starting out with the thought, 'I release the need for this in my life.'" -- Wayne Dyer

"You'll seldom experience regret for anything that you've done. It is what you haven't done that will torment you. The message, therefore, is clear. Do it! Develop an appreciation for the present moment. Seize every second of your life and savor it." -- Wayne Dyer

"Everything you need you already have. You are complete right now, you are a whole, total person, not an apprentice person on the way to someplace else. Your completeness must be understood by you and experienced in your thoughts as your own personal reality." -- Wayne Dyer

"When you abandon making choices, you enter the vast world of excuses." -- Wayne Dyer

"A non-doer is very often a critic-that is, someone who sits back and watches doers, and then waxes philosophically about how the doers are doing. It's easy to be a critic, but being a doer requires effort, risk, and change." -- Wayne Dyer

"We are Divine enough to ask, and we are important enough to receive." -- Wayne Dyer

"We are not human beings in search of a spiritual experience. We are spiritual beings immersed in a human experience." -- Wayne Dyer

"Once you believe in yourself and see your soul as divine and precious, you'll automatically be converted to a being who can create miracles." -- Wayne Dyer

"Everything in the universe has a purpose. Indeed, the invisible intelligence that flows through everything in a purposeful fashion is also flowing through you." -- Wayne Dyer

"If you knew who walked beside you at all times, on the path that you have chosen, you could never experience fear or doubt again." -- Wayne Dyer

"Heaven is a state of mind, not a location." -- Wayne Dyer

"I am realistic - I expect miracles."-- Wayne Dyer

"Go for it now. The future is promised to no one." -- Wayne Dyer