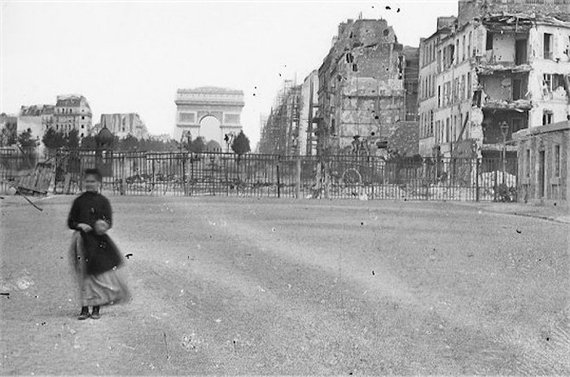 I don't want to scare readers into thinking that the residents of Paris do this on a regular basis, nowadays. NOOOOOOOO, they do not. Alarming enough is the fact that they do eat horse meat, today, yes, and most likely some will tomorrow as well.

Imagine the brutal war (aren't they all?) between France and Germany, one of many, taking place from July 1870 to May 1871. Also referred to as the Franco-Prussian War, because the Prussians (from Prussia, a part of Germany/Poland in the Baltic region) were involved.

Started on the false assumption that France had been insulted and threatened, French Emperor Napoleon III went to war and, to make a long story short, France had to give its two regions of Alsace and Lorraine to the winning Germans. To this day, people in those areas to the east of France still speak German, as well as French of course.

In September 1870 the Prussian army attacked Paris. The city was so well defended and ready for war that the mighty Prussians decided to force a surrendering by blockading and starving the city. No food was let into the capital, no food was left in the stores, and no supplies were expected to reach the citizens.

Meat Was in Dire Need.

But let's get back to the elephants. During the war, as the food supplies were seriously dwindling, the first stage was to kill available horses for their meat. When that shrank to no horses left to eat, the city looked to the capital's zoo for meat supply. The first animals to be sacrificed were deer and antelopes, and some large birds.

But let's face it, not much meat on those -- not enough at least for the residents of an entire city. Neither lions nor tigers were killed. Maybe they could not catch them. Time came to turn to larger beasts to feed many more. The still-existing famed Jardin des Plantes was then the actual zoo of the city.

Castor and Pollux were the darlings elephants of the zoo, the favorites of children, who were able to ride on their backs. What happened next had to be one of the saddest events in the history of the city. Castor was shot first with a steel bullet on December 29, 1870. The next day, Pollux was killed.

The two dead elephants were purchased by the Boucherie Anglaise for a sum of 27,000 francs and their meat was sold to several Parisian eateries. Many restaurants guests were unaware of the kind of meat was served, only thankful that any meat was available at all. 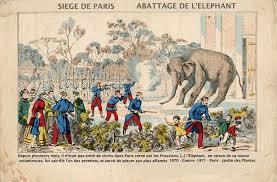 A few restaurants advertised stuffed donkey head, elephant meat soup, kangaroo roast, wolf leg with fox sauce, and cats and rats delicatessen. How many of those offerings were actually what they described is unknown, and some might have been a matter of speech, but the elephant meat was the sad truth. Rats were probably the real thing as well, as we know that Paris had (has?) a real rat problem. My grandfather ate rat meat during WWI. 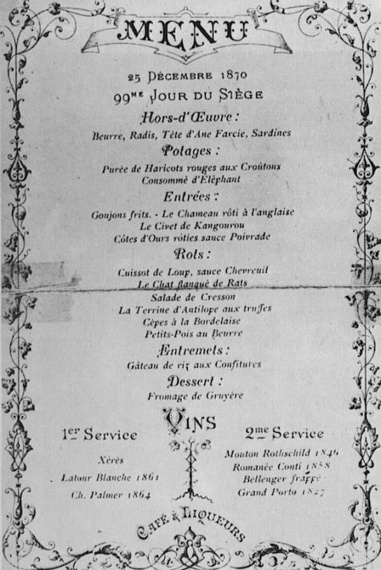 Henry Labouchère (1831-1912) was a wealthy English politician, writer, publisher and theatre owner. Visiting Paris during the siege of the capital, he has this to say about eating the elephants:

"Yesterday, I had a slice of Pollux for dinner -- Pollux and his brother Castor are two elephants, which have been killed. It was tough, coarse, and oily, and I do not recommend English families to eat elephant as long as they can get beef or mutton."

The ongoing war distracted the Parisians from the publicized killings. The tragic fact that a few days later Bismarck, aka Otto Eduard Leopold, Prince of Bismarck, a conservative Prussian statesman, ordered an all-out assault on the city, which surrendered quickly, marking the end of the war, showing that the elephants could in fact have been saved.

As a vegetarian, I can only deplore the killing of these two gentle creatures, but I also suffer everyday at the thought of lambs and cows, chicken and calves, turkeys, duck, birds, and all the other animals that our society in general considers okay to kill and eat. Aren't they all just Castor and Pollux? 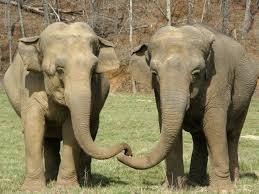