On the 19th of January, Massachusetts, reputedly the most liberal state in America, fired a shot heard round the world. In an epic political upset, Republican Scott Brown, who had once posed naked for Cosmopolitan magazine and now ardently championed tax cuts, smaller government, and waterboarding, defeated his heavily Democratic opponent. He thus succeeded to the Senate seat held in splendor for over forty years by the most famous of all liberal Democrats, the late Senator Edward Kennedy.

Over the next few weeks, American politics came as close as it ever has to a true Zen moment: The One, who had towered over the political landscape since the presidential primaries in 2008, suddenly looked like Nothing.

Not surprisingly, an outpouring of commentary akin to the explosion of a supernova resulted. Alas, the comparison is all too apt. Until the final days, the outcome of the race seemed a foregone conclusion. None of the many news outlets on financial life support ventured to front the expense of conducting exit polls. As a result, post-election commentators had few real facts to rein in their imaginations. They were operating in a near-perfect vacuum, just as in outer space.

For a phenomenon on the scale Brown's victory may represent, this much uncertainty is hard to endure. California insurer Anthem Blue Cross's shocking announcement of premium increases of up to 39% breathed just enough life back into the cause of health care reform to induce Democrats to go it alone on a stripped down version via the budgetary "reconciliation process." But polls now show Republicans opening a lead over Democratic Congressional candidates in the nation as a whole, while speculation runs riot about the significance of the Tea Parties.

In the absence of reliable polls, we thought it was worthwhile to try some classic methods for making sense of elections by analyzing returns aggregated by geographical units. The results of our statistical analysis appear in our Working Paper just published by the Roosevelt Institute. Here we focus on what our results imply about the future of American politics.

Electoral Shifts
Voter Turnout First of all, a pattern of one sided abstention in voting is very obvious. Put simply, in 2004, 2006, and 2008, lower income Massachusetts towns produced substantially heavier majorities for Democrats than richer areas. But in 2010, patterns of voter turnout shifted dramatically: Voters did not turn out in poorer communities that normally give Democrats disproportionately heavy shares of the vote. The finding is consistent with the claim put forward by the chief pollster of the Democratic campaign, that the Obama administration's unwillingness to face down the banks and slowness in dealing with the recession have demoralized the party's electoral base.

Secondly, our results suggest that, that among those who did turn out, two factors were particularly important in driving them to embrace the Republicans. One is perhaps predictable: that for each 1% unemployment rose in towns, the Democratic share of the vote fell by about a quarter of 1% from 2008. That may not sound like much, but the average rise in unemployment was about 4% across the state as a whole, with many towns hit much harder, including some that experienced double digit rises.

The Future: Storm Warnings
This second finding has ominous implications. Right now analysts who take the Massachusetts shock seriously see it mostly in terms of recycled mantras from the Clinton administration. "It's the economy, moron." Or, "Voters to Democrats: Jobs, Jobs, Jobs."

This is plainly too glib. A good part of the swing toward Scott Brown came from voters who were not only frightened by high unemployment - their own, or their neighbors' - but who also suffered large losses in wealth from the collapse of the housing bubble. For most Americans, their greatest economic asset is their house. We thus suspect that the housing collapse is also likely associated with major declines, or potential declines, in retirement incomes. Particularly for older voters, this has to be very alarming.

Revisiting published interviews with Tea Party activists from this standpoint is instructive. We tested to see if actual changes in town tax rates thus far (the qualifier is important, since towns adjust rates and valuations only slowly) affected voting in the 2010 Senate race. They did not.

But we would not conclude that the angry talk about taxes is irrational. On the contrary, complaints about taxes, mortal fears of deficits and a larger role for government (which would have to be financed) are readily understandable, especially when one recognizes how the Democrats' failure to move vigorously against unemployment has hurt public confidence in government's capacity to act.

Our evidence thus makes us skeptical of much writing about the Tea Party. Frank Rich of the New York Times and other analysts are certainly correct in observing the ties between parts of the Tea Party movement and any number of political fringe groups that have a long history of racism, anti-Semitism, and violence.

But we are dubious that such groups are the heart of the Tea Party phenomenon, at least right now. It seems more likely that most of the citizens rallying under the Tea Party banner are pretty much what they say they are. They are ordinary Americans hammered by the almost Biblical series of economic plagues that for most of them began in the fall of 2008, when the decision to let Lehman Brothers go bankrupt turned a looming economic crisis into a world historical disaster. They have been driven to the breaking point by watching their jobs and retirement savings melt away as banks hit them with steeply rising fees on their credit and debit cards and pay them next to nothing on what is left of their cash holdings.

Conclusion: The Limits of the Tea Party Phenomenon
So are the Democrats or the Republicans in a position analogous to New Orleans as Katrina approached or will the storm fizzle out? Here we have space only to state our conclusion. The variables our study identifies are important, but they are not all-powerful. Elections involve choices between candidates and, as some Democrats have also ruefully responded, you can't beat somebody with nothing. Campaigns also matter, as, plainly, does political money.

Still, if as many expect, the U.S. is facing years of slow job growth coupled with a prolonged housing crisis, then the tea party in Massachusetts may look like a tempest in a teapot compared to what's coming in at least some elections in other states. Many have higher unemployment rates and far worse housing numbers than Massachusetts. In Nevada, for example, more than half the state's voters own homes worth less than the value of their mortgages. The recent, unexpected strength of the dollar, brought about by the Greek crisis in Europe, is another blow to the economy, at exactly the wrong moment for Democrats. Because interest rates are already so low, there is little the administration can do with monetary policy to offset this. The obvious alternative, running a bigger fiscal stimulus, is plainly unacceptable to deficit hawks in the administration and on Wall Street.

Add to all this the likely effects on campaign spending of the recent Supreme Court decision lifting restrictions on election spending by corporations and it is hard not to imagine that voters will soon be installing a lot of swivel chairs in the offices of their representatives.

Unless or until both major parties splinter beyond repair, that's probably not Germany, 1933. Instead, in the worst case, since the Democrats now own this crisis, it may be Great Britain, 1931, when another coalition of Liberals and Labor lacking both courage and convictions endured repudiation at the hands of an electorate mortally afraid of both unemployment and budget deficits.

Figure 1
The Suddenly Emerging Republican Majority in 2010 in Massachusetts 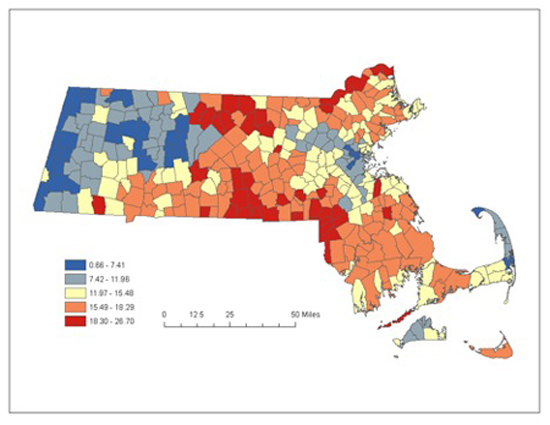