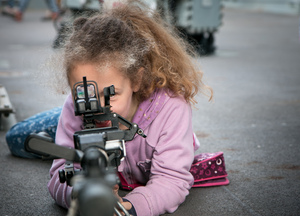 What Big Bullets You Have, Grandmother!

One section of the National Rifle Association's website is endearingly named "NRAFamily." It includes a series called "Fun Friday," covering news like "6 Invasive Species That Are Damaging The U.S." and a clever "How To" section that, somehow, includes an article named "The 7 Disease Bearing Ticks In America." Now, NRAFamily has posted its second installment in its new series about fairy-tales-with guns. As the editor states about the new children's series:

[...] how many times have you thought back and realized just how, well, grim some of them are? Did any of them ever make your rest a little bit uneasy? Have you ever wondered what those same fairy tales might sound like if the hapless Red Riding Hoods, Hansels and Gretels had been taught about gun safety and how to use firearms?

Well, no, family section editor. Hadn't thought about that. Just how would that play out? Well, in the first NRA retelling, we meet Little Red Riding Hood meandering toward her unlocked and loaded grandmother's house, where granny's got a gun pointed in the face of the Big Bad Wolf.

"I don't think I'll be eaten today," said Grandma, "and you won't be eating anyone again."

In the retelling of Hansel and Gretel, Gretel, the "better shot," keeps her rifle's crosshairs on the witch while Hansel springs some mystery boys from a cage, runs back home with them and then brings the whole pistol-packing village back to the gingerbread house to freak the crap out of the witch and then eat her home for dessert.

This is yet another example of how the NRA and their followers are investing not just money but also influence over kids to ensure that the next generation will keep Charlton Heston's cold dead hands gripping that flintlock longrifle. And this time they've enlisted Little Red Riding Hood for help.

Influence over kids is not new in the NRA community. Examples include this pro-gun, pro-NRA lawmaker's family holiday card, featuring pistols, rifles and a Christmas tree. Annual NRA conventions get hundreds of kids to attend. At their 2014 convention, a man dressed as a bird that goes by the name "Pig Man" told The SportsChannel, "What's great about the meetings is the number of children and how the manufacturers in this community are supporting these kids." One such kid-supporting manufacturer designs the "My First Rifle" line of firearms just for children and sells about 60,000 every year to kids between the ages of 4 and 10. And, yes, there are pink guns for little girls.

But changing fairy tales? Well, as it turns out, nothing is really new about retelling fairy tales, something that can happen in the progression of oral and written storytelling traditions. Moral values of the times probably come through in each author's retelling, whether overtly or subliminally.

Some of the oldest fairy tales were really short and their context today is nearly incomprehensible - sometimes demanding an update:

Once upon a time there was a stubborn child who never did what his mother told him to do. The dear Lord, therefore, did not look kindly upon him, and let him become sick. No doctor could cure him and in a short time he lay on his deathbed. After he was lowered into his grave and covered over with earth, one of his little arms suddenly emerged and reached up into the air. They pushed it back down and covered the earth with fresh earth, but that did not help. The little arm kept popping out. So the child's mother had to go to the grave herself and smack the little arm with a switch. After she had done that, the arm withdrew, and then, for the first time, the child had peace beneath the earth.

Read that a few times. Each time, it might feel like you get the point. But not without something else confusing popping up. We found eight potential points of confusion. The only current-day context we can align to that fable is our favorite joke: A kid asks, "Mamma, why is daddy so pale?" Mamma responds, "Shut up and keep diggin'."

Lack of definitive context might be why so many of the researchers and transcribers of oral folklore took a few liberties with the text. That includes fairy tale icons like the brothers Grimm. Often, they made the tales a little longer, maybe to shoehorn it into the context of their time. Some of the really grotesque (but fun) elements were tamed down over time. For example, between its first incarnation and the Disney cartoon in 1950, somebody decided to get rid of the toe amputation scene in Cinderella.

The Grimm Brothers also put stories into the context of their day by injecting Christian values, which sometimes changed the stories quite a lot. In really early versions, Rapunzel got laid every time she let down her hair and a guy used the strands to climb up into her sex lair. So she soon got pregnant. In the Grimm's final version, Rapunzel's guardian nipped that in the bud by snipping off her hair (but did so a little too late).

So, what's wrong with the NRA messing around with stories that were already messed with? A lot.

Psychologists, psychoanalysts, scholars and philosophers tend to agree that fairy tales serve as a mirror into the human psyche and a child's journey: First, bad shit goes down, just like it does in childhood. A wicked character shows up and that encourages the child to sort out and focus their internal angers externally and more appropriately than he or she might otherwise. Then through a little ingenuity - or luck - the root of the fairy tale's problem is solved - solved in a way that a young kid probably couldn't see coming. Hope is surprisingly restored.

Back in real life, the kid who heard the story feels reassured and then has nightmares about it. All and all, it's a pretty accurate parallel to growing up.

In the NRA's versions, this valuable mirror into the psyche and human development is robbed at gunpoint. The resolution - guns - is introduced right at the beginning of each story. So you know where it's going. It's like Jack and Mrs. Sprat starting their little fable by walking into a grocery store with coupons for Lean Cuisine and lard sticks. There would be no conflict for the Sprats to overcome or to share with kids or for kids to learn from.

The problem isn't that the NRA is rewriting traditional stories that have already been rewritten over generations; it's how the NRA is doing it. They're missing a major point: Fables help kids develop into adults. Guns kill them.