Much of the debate over taxing the wealthy focuses on taxing giant salaries.

But a new study from the nonpartisan Tax Policy Center found that the real money for the wealthy is made from investments and business income—not compensation.

The paper, from Joseph Rosenberg, takes a broader definition of income. The so-called "Expanded Cash Income" includes retirement and health-care benefits, retirement income, tax-exempt interest and other add-ons aimed at providing a more accurate picture of the nation's income distribution. 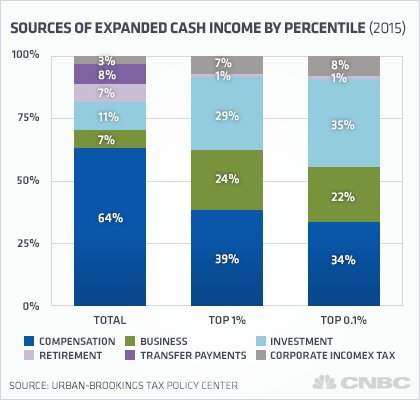 The results show a stark contrast between the 1 percent and the rest. The population as a whole earns 64 percent of its expanded cash income from so-called "compensation," basically a paycheck from a company. But the top 1 percent earns only 39 percent from compensation. It gets 24 percent from business income and 29 percent from investments.

More From CNBC:
- Want to be rich? Go get it yourself
- Meet the new wealthy: The cash hoarders
-The rich don’t retire

The top 0.1 percent is even more reliant on investments, with 35 percent of their income from investments.

In other words, the richer you are, the more likely you'll make your money from investing or owning a business.

As Jared Bernstein of the Center on Budget and Policy Priorities points out, "Once you get up to the very top of the income scale ... you've got two-thirds of their income coming from nonlabor sources."

That's not to imply that the wealthy are just living off passive income, or that they're not working as hard as the everyday America. Business owners, in fact, often work longer hours than full-time employees.

"When we think about small business owners, these are 24-7 people and they can be working harder than you or me," said Roberton Williams of the Tax Policy Center. He said there is little correlation between the type of income people receive and their level of work.

Indeed, economist Emmanuel Saez of the University of California at Berkeley writes that since the 1970s, the rising incomes of the wealthy are due largely to a growth in their wages and salary income.

"The evidence suggests that top income earners today are not 'rentiers' deriving their incomes from past wealth but rather the 'working rich."'