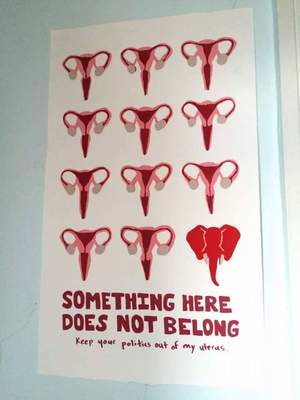 Right before George W. Bush came up with the first legitimate reason to burn a book -- a memoir called "The Decider" -- he told NBC anchor Matt Lauer that, as young man, his mother showed him an old jar containing the fetus of her stillborn child. Later, to make that seem less psychotic and to clear up any questions, Barbara Bush explained that it was her housekeeper who actually canned George Zygote Bush. Which really makes a person wonder where the hell the housekeeper was dusting when she came across it. "Oh Lord," she might have sighed while scooping out the litter box, "The governess misplaced another lovely fetus. I'd better see if there are any Ball jars left in the pickling cabinet."

That wouldn't happen today, not in Indiana, where the governor recently signed into law legislation designed not only to make abortion more traumatizing and harder to obtain, but also to freak the crap out of women whose bodies naturally reject a zygote or fetus. Today, Barbara would have to provide that jar a proper burial at her own expense. As do women who elect to have an abortion today at that remaining Indiana clinic (probably located near Ice Station Zero in Antarctica). It's a little like the Chinese policy that requires the nearest kin to pay for the bullet used to kill a condemned prisoner.

This bill, HEA 1337, which Governor Pence signed into law at the end of March stipulates mandatory burial or cremation as well as some guidelines that seem designed only to bewilder alien historians and archeologists a few centuries down the road.

There's a lot more vaginal madness in that bill, if you want to check it out yourself. But in all fairness, the law mercifully spells out that zygotes do not require to be named before internment. No names, just ceremonial disposal. And they can be cremated in batches if the mother needs to take advantage of a volume discount. How thoughtful.

Plus, no names will cover tracks of Indiana funeral homes that have had a few problems with fetus funerals - like the one that just shoved a few in the ceiling. And, leaving no evidence, Indiana can dodge the United Nations, which declared in January that, regarding abortion:

... subjecting women and girls to humiliating and judgmental attitudes in such contexts of extreme vulnerability and where timely healthcare is essential amount to torture or ill treatment ...

In any event, these new laws always lead to groups of protesting voters holding picket signs, making scripted phone calls, signing petitions and demanding to get their Supreme Court sanctioned rights back. Surely this is happening in Indiana, but the women of Hoosier Ville are also responding in what might be the most creative pro-choice protest ever.

Someone who is remaining anonymous started a Facebook page called Periods for Pence, a call to action for all women to contact the good Governor with progress reports on their baby making. And they the women of Indiana are responding, and many are reporting their conversations on that Facebook page:

Me: "Good Morning. I just wanted to inform the Governor that things seem to be drying up today. No babies seem to be up in there. Okay?"

I was just writing to see where I should send my used tampons. You know, since it's a collection of human cells that could have created a life. Also, will the Governor's office be covering postage?

Me: Hello, this is Sue Magina again. I just hit a pothole on I-70. It was a doozy! I'm worried it might have shaken something around up in there, and I wanted to make sure that was addressed in this new abortion law. I knew Governor Pence would be worried. Thanks.

I tried to call to let him know that I have a shallow vagina and my husband is doing his part but I'm not sure his sperm is reaching my egg. I wanted to ask him his thoughts on shallow vaginas and the best position we should be having sex in so I can get pregnant, or at least have a really good orgasm. Should I have a vagina implant, and if so, does he know anyone with a long vagina that would be willing to swap?

I don't have a period anymore. Do you think it OK I call his office to discuss the Oxford comma? If not, then how a period should be followed by two spaces not one. One space is some internet thing. Glad Pence is on the case. Can't have too many unschool gynoticians.

The group is not limiting itself to phones and online media protests - members have brought to the mix their right to assemble. Recently they held and event they've named "Color Your Junk for Mike Pence," where they gathered to color in pages from a sex education coloring book - and then mail the pages to him. Kim Saylor, the organizer, told the press: "We want Gov. Pence to have enough information to act as 'Dr. Pence' for ourselves and our fellow Hoosiers. By providing him with a chance to examine depictions of our reproductive systems, we hope he'll gain much needed insight."

This is a noble effort by the protesters and is undoubtedly driving employees at the office of the Governor toward nervous breakdowns. But as they leap over the edge, they should remember that the problem isn't the protesters. It's the American madness of crowds that keeps electing men who are obsessed with female reproduction.

In Indiana, more than 16% of the population live below the poverty line, compared to the 9% of pregnancies that ended in abortion. If that sounds like a lot, consider that, in numbers, abortion is a decision that only 1,440 of 6,500,000 people in the state of Indian face each year. There are bigger issues out there.

Charles Mackay, in his classic book "Extraordinary Popular Delusions and the Madness of Crowds," states that:

Men, it has been well said, think in herds; it will be seen that they go mad in herds, while they only recover their senses slowly, one by one.

The women of Indiana are leveraging that maxim. And they starting with one man named Pence. And if he becomes the Vice President, we're all going to have to get out our coloring books.