Gluten is a mixture of proteins found in wheat and related grains, such as barley, rye, oat, spelt, kamut and triticale.

People who have celiac disease or gluten intolerance must avoid all sources of gluten, whereas people who are allergic to wheat react to wheat protein and may tolerate other grains that may or may not have gluten.

Wheat is commonly used in baking, where the gluten provides elasticity to dough, and helps baked goods rise and keep its shape. Fortunately, however, there are many gluten-free flours and starches to choose from that can replace all-purpose flour.

Here are 10 of my favourite gluten-free flour replacements, and tips for baking with them:

Despite its name, the buckwheat plant is not a wheat. It is related to rhubarb in the knotweed family of flowering plants. Buckwheat flour is made from ground buckwheat seeds, which are rich in complex carbohydrates, protein and calcium. It is a dense flour with natural binding tendencies and an earthy, nut-like flavour. Buckwheat flour is an ideal substitute for flour in cookies, pancakes and recipes that do not require the mixture to rise. However, it should be used in combination with lighter flours and replace up to half of the flour called for in cake or bread recipes.

Coconut flour is made from ground coconut meat, which is naturally sweet. It has high fat content and the highest fibre content of any flour. Because coconut flour soaks up moisture and absorbs liquid so well, it should be used in combination with other flours, and can replace up to 20 per cent of the flour called for in a recipe. It works best with eggs or additional liquid to keep the recipe from getting too dry.

Chickpea flour, also referred to as gram or garbanzo flour, is made from ground garbanzo beans. It is high in protein, absorbs liquid quickly and has binding properties that make it great for giving structure to baked goods. It's a heavy flour that can also be used as an egg replacement. It does have a slightly bean-like flavour, so if you use more than ¼ cup in a recipe you may need more sweetener to mask the taste.

Quinoa flour is made of ground quinoa seeds, which is considered an ancient grain and a staple food originating from the Andes mountains more than 3,000 years ago. Quinoa is an excellent source of complete protein and provides all of the essential amino acids. It has a strong earthy flavour that can alter the taste of a recipe, so it's best to substitute up to half of the all-purpose flour called for in a recipe, and combine it with a light flour and starch.

Almond flour is made of ground blanched almonds with the skin removed, which would make it unsafe for people with almond and tree nut allergies. This flour is naturally slightly sweet, and high in protein and fibre. Almond flour has some natural binding tendencies, which helps give structure to baked goods. it also has natural oils that make baked goods soft and moist, making it an easy flour to bake with. Almond flour can replace all-purpose flour in most recipes in a 1:1 ratio.

Sorghum flour, also called jowar in India, is made from grinding whole grain kernels of the sorghum plant. Sorghum is high in dietary fibre, protein and iron. It has a very soft, light crumb with a mild, sweet flavour, allowing sorghum flour to yield smoother and softer textured gluten-free baked goods. It can be used as a 1:1 all-purpose flour substitute in just about any recipe, or blended with starches, other gluten-free flours and xanthan gum.

Tapioca is a starch that comes from the cassava root. It's virtually flavourless and is traditionally used as a thickening agent, but also works well in baking to bind recipes together and add crispness. Tapioca flour must be used in combination with other flours, because if you use too much, it can make a recipe a bit dense or gluey.

Potato Starch is made from the dried starch component of peeled potatoes, and should not be confused with potato flour, which is made from ground dried whole potatoes. Potato starch is flavourless and helps to bind recipes, and add lightness and lift. It is best used in combination with another starch or a light flour, as too much potato starch can give a recipe a gummy texture. Potato starch can also be used as a thickener, but loses its ability to thicken once it is boiled.

Pauline Osena is a food allergy advocate and founder of HypeFoodie.com, an online resource for allergy-friendly living. This former dairy junkie became an expert in allergy-friendly cuisine while figuring out how to feed her child with multiple food allergies. Pauline aims to inspire culinary adventures and experimentation with her series, "An Allergy-Friendly Makeover," and shares the valuable knowledge she has gained from her trials, errors and adventures in living with food allergies with "The Allergy-Friendly Top 10." Pauline's short-term goals include getting a full night's sleep and drinking her entire cup of coffee while hot. 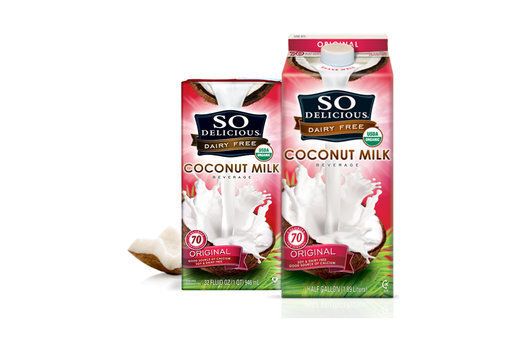 1 / 8
Coconut Milk
<strong>Taste: </strong>Coconut milk is sweet and creamy. Thanks to its higher content of healthy fat, it's a bit thicker than other dairy alternatives. It has a minimal nutty flavor compared to other nut milks, and makes a stellar coffee creamer.<br><br> <strong>Nutrition: </strong> 70 cals, 4.5g fat, 7g sugars,
So&#x20;Delicious&#x20;Dairy&#x20;Free