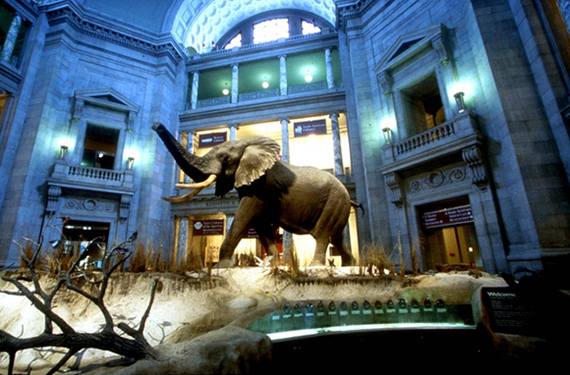 Cultural discovery doesn't always come cheap. While admission fees support and sustain museums, they can add up for tourists looking for artistic experiences on a budget. To help you save a few bucks while on the road, we've rounded up a list of 10 great (and totally free) museums across the country.

Not content with one free museum? How about 19 (plus a zoo)? The Smithsonian, surrounding the National Mall, comprises some of the best and most varied collections of art and Americana in the world. See contemporary works by Rothko and de Kooning at the groovy, cylindrical Hirshhorn Museum and Sculpture Garden, lust after the Hope Diamond at the National Museum of Natural History, or fly an airplane simulator at the National Air and Space Museum. And, of course, don't forget the giant pandas at the National Zoo.

This museum icon is a work of art itself, all contemporary design and bright open spaces perched high above Los Angeles. In the center's four pavilions, explore extensive collections of photography, sculpture, and European art. Outdoors, carefully manicured gardens feature massive modern sculptures (and beautiful vistas of the hills). And at the Getty Villa, a short drive away, the ancient societies of Greece and Rome come alive with a fascinating array of artifacts and antiquities, including coins, gems, and jewelry.

Charles Frye, the son of German immigrants, and his wife Emma were two of Seattle's earliest patrons of the arts, dedicated to collecting and curating art for public view at the turn of the last century. View their Founding Collection, some 230 paintings mostly of German origin, the way the Fryes always intended -- for free. Tours and some lectures at the museum are also complimentary, and musical performances by local and visiting artists take place monthly.

Founded in 1914 with just one painting, The Baltimore Museum of Art (BMA) now plays home to some 90,000 pieces spanning from the 15th century to the present (including the largest collection of Matisse works in the world). A brand-new renovation, set for the end of spring 2015, aims to add new technology and thoughtful design to the museum. And this year sees the return of BMA's stolen Renoir On the Shore of the Seine, on public view for the first time in more than 60 years.

A part of the Seattle Art Museum, this innovative -- and environmentally friendly -- sculpture park is free and open to the public 365 days per year. Pick one and explore the park not just for its collection of Claes Oldenburg and Louise Bourgeois pieces but also for the ocean air that blows in from Elliott Bay. It's hard to believe that this picturesque spot, where summer months bring live music, food trucks, and yoga classes, was once nothing but a dirty industrial site.

The Nelson-Atkins Museum of Art is an encyclopedic museum, which means that it offers an array of art and artifacts from cultures far and wide. In the main building, view African masks, 18th-century French cabinetwork, and photography by Dorothea Lange and Diane Arbus, all under one roof. Head outdoors to meander through a sculpture garden and then see the famous, oversized Shuttlecocks installation by Claes Oldenburg and Coosje van Bruggen.

Manhattan certainly isn't hurting for museums, but one of the New York art scene's brightest stars resides in an outer borough. Since the early '70s, the Bronx Museum has played a vital role in connecting the local community with the art world, and to celebrate its mission, the museum implemented universal free admission in 2011. Take the D train to the museum to view its galleries of contemporary art from a number of cultures, including works by African, Asian, and Latin American artists.

TripAdvisor users rank the Cleveland Museum of Art (CMA) higher than that other big attraction, the Rock and Roll Hall of Fame and Museum, for good reason. Not only is admission free for all guests, but the museum also houses one of the most comprehensive art collections in the country. Located in Cleveland's bustling University Circle neighborhood, the CMA offers plenty of exhibitions and cultural enrichment experiences for all ages, plus a popular festival during which museumgoers can create classical works in a medium of sidewalk chalk.

One of Houston's top sights is this totally free museum that was founded by John and Dominique de Menil, who believed in the spiritual power of art. They amassed a collection of some 10,000 paintings, sculptures, decorative objects, prints, drawings, photographs, and rare books, now housed in an airy, chic space created by Renzo Piano, who also designed the Centre Georges Pompidou in Paris. The collection is shown via "whimsical" rotation, so no visit is quite the same as the last.

This spot at the southwest corner of Seventh Avenue and 27th Street bills itself as the most fashionable museum in New York City. Its permanent collection contains some 50,000 notable garments and accessories ranging from the 18th century to now, while rotating exhibitions focus on celebrated designers, lasting trends, and even specific articles of clothing (a current exhibition considers lingerie and its various innovations). The main-floor Gallery FIT also features work by students and faculty.

Read the original story: 10 Amazing Free Museums in the U.S. by Dara Continenza, who is a regular contributor to SmarterTravel.

You Might Also Like:
More:
Travel TipsTravel BlogsFamily Travelsummer travel travel
Newsletter Sign Up
An essential daily guide to achieving the good life
Subscribe to our lifestyle email.
Successfully Subscribed!
Realness delivered to your inbox