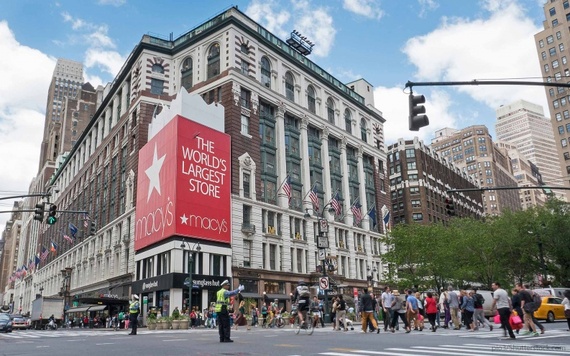 Not everything in Macy's is worth taking home, however. Some items can be found at a better price elsewhere, or get marked down during one of the store's many sale days. Click through to see which Macy's deals are worth a look, and which you should give a pass.

Macy's is known for its discount prices on many apparel lines, but you can find many other good deals there, too. Click through for 10 great bets at Macy's.

If you can find the right sale, Macy's is a great place to grab jetsetter outfits for daily commuter prices. "In recent years, we've seen suits from Kenneth Cole and Sean John for as little as $50, Michael Kors handbags from $35 and Tommy Hilfiger towels from $2," said Benjamin Glaser, features editor with DealNews.

If you bought the wrong shade of lipstick, you don't have to be stuck with it if you bought it at Macy's. "Macy's offers full refunds for gently used cosmetics, so if that foundation made you break out or a lipstick chapped your lips, you can still get your money back," said CouponSherpa.com savings expert Kendal Perez.

If you get nervous about exchanging something, Macy's can make the transaction an easier one. "You don't need a receipt to exchange items at Macy's because they use special UPC codes to tie specific purchases to the purchaser," said Perez.

Read: 10 Best and Worst Retailers of the Year

Apparently, Macy's is a great place to give your wedding guests a break on the price of china patterns, bedding, kitchen items, home decor, luggage and more from top brands, said Kerry Sherin, senior content manager at Offers.com. "Other stores who have online registries don't necessarily discount as well as Macy's does. Thousands of products that people add to their wedding registry are eligible for the site-wide discounts that are going on at any given time," she said.

Outerwear, particularly The North Face brand, can be a good deal here. "This is a hard category to stay competitive in, and Macy's does just that," said Sherin. "You may see prices cheaper elsewhere on the internet, but Macy's keeps a large and diverse inventory that you can often find discounted."

Sherin said that Macy's is a good place to score a great deal on brands such as KitchenAid, Keurig, Nespresso. "Where others succeed in offering better deals on large appliances, Macy's excels in offering up some of the best deals on these small kitchen items," she said.

These sales occur throughout the year, typically on Saturday, with a "preview" of the sale on Friday, said Perez. "Items that were previously marked down 40 percent are often bumped up to 65 percent off, and occasionally sales offer additional savings of 40 percent on top of clearance prices," said Perez. Glaser, from DealNews, said to look for one of these sales in February, one in April or May, one in October, and two in December.

Macy's is coupon heaven, said Perez. "Macy's almost always has a coupon for extra savings of 10 to 20 percent off, plus savings passes of $10 off $25 or more purchases," she said. These offers are often good in-store and online, she added. Websites like PromoCodeWatch and RetailMeNot are just a couple of places to find coupons to cut down on spending at Macy's.

You can return an item for free at any time after purchase, according to Macy's website. However, there are exceptions, said Perez. "Fine watches have a return window of 30 days, while mattress returns are subject to an $80 pick-up fee and 15 percent ‘preference fee.'"

Read: 15 Stores With the Best and Worst Return Policies

Here are 10 deals at Macy's that you might want to pass up. At the very least, it's a good idea to do your research before you buy to make sure you're getting the best deal. Click through to see what they are.

As with many other department store cards, Macy's credit card features a low credit limit and high APR (up to 26.99%), said Perez. "Users gave the card a paltry 1.5 out of 5 stars on CreditKarma.com due to billing issues and poor customer service," she said. Perez said cardholders do receive coupons and extra discounts, but non-cardholders also can get access to a number of discounts as well.

When something has been on sale for a long time, the sale price is basically the normal price. Perez said there are many things at Macy's that never go off sale, but that doesn't necessarily mean they're a bargain. "Research prices on products before you buy, and check out price histories to ensure you're actually getting a deal," she said.

Macy's isn't exactly known for its selection of electronics, so you might not want to fulfill your tech needs here, said Sherin. "Just as you wouldn't go to Best Buy for a new bedspread, I'd avoid electronics at a store known mostly for home goods and clothing," she said.

Usually, rebates are a good thing, but Perez said that many of the kitchenware deals offered during Macy's Black Friday sale required a mail-in rebate to receive the discounted price. "From a savings perspective, rebates are not ideal, especially on a day that's supposed to offer the best prices of the year," she said.

Yes, Macy's has free shipping, but only on beauty items and orders of more than $99, said Regina Conway, consumer expert for SlickDeals.net. She does offer a shipping hack, however. "Order enough items to reach the $99 free-shipping threshold, then return your unused item at no cost. Returns can also be done in-store," she said.

6. Buying Without a Coupon

What makes Macy's a consistently great department store is that rarely, if ever, will you need to pay retail. "Always look for a coupon," said Conway. "If there isn't a coupon offer available at the exact moment you're shopping, chances are one will become available within a week or so."

Just like other electronics, headphones at Macy's might not be the soundest investment, said Sherin. "For the most part, those seem to be full price and not on any kind of discount," said Sherin.

Macy's focuses more on providing the best deals for small appliances rather than on large appliances, said Sherin. "In fact, finding any inventory online in the large appliance category at Macy's could be almost impossible," she said.

It's easy to assume big sales events, like Black Friday, are the days you'll find the best deal. However, that's not always the case, especially at Macy's. "This past Black Friday, we saw Macy's advertising deals like a KitchenAid stand mixer for $200 and designer men's suit separates for 50 percent off, both of which were less attractive deals than ones we'd seen from competitors like Amazon, or even Macy's itself in the preceding months," said Glaser. The point: Do your research before you buy.

Read: From Zara to Nordstrom: 10 Annual Sales That Should Be on Your Radar

This article, 10 Best and Worst Deals at Macy's, originally appeared on GOBankingRates.com.

Looking for the best deal before you buy? Take a look at HuffPost Coupons where we have hundreds of promo codes from brands you trust, including Macy’s coupons.