With the year and the decade soon ending, we're dedicating this final Design Thursday in 2010 to an assessment of the best architecture and interiors of the decade (2001-2010), and likewise providing some thoughts on what you can expect in 2011 and soon thereafter.

There is clearly lots of territory to cover (literally), as we're doing our best to traverse the decade and the globe. For this reason, in addition to the 10 Best Architecture Moments below, I'm joined by fellow design bloggers Jean Lin and Patricia Brizzio, who have assembled the 10 Top Interiors of the Decade and Architecture: What's Coming in 2011, respectively.

On point, the late 1990's were an electrifying period of time for architecture-related progress, with marvels such as the Guggenheim Museum Bilbao designed by Gehry Partners; in fact, upon visiting Bilbao in 1998, Philip Johnson, arguably the leader of modern architecture, announced Gehry "as the greatest architect we have today," and subsequently described Bilbao as "the greatest building of our time." In my view, that's quite an achievement to close out the millennium. Source: Vanity Fair.

Following this triumph and unmistakable thrust, major architectural commissions in the early and middle decade emerged from obsession with innovation, including use and application of materials, structural system advances, technology and computer-aided design, and of course sustainability. In fact, the scale of innovation often felt like it was accelerating. But as credit markets imploded in September of 2007, so did architectural headway and construction. Therefore, without wanting to sound hackneyed or dated, I contend that architecture of the decade is best described by the following thesis: Bull, Bubble, and Bear. While there have been scattered diamonds in the rough (projects that had already secured financing pre-bubble), the last three years of the decade have been (comparatively) hollow and void of momentum.

That all said, here are the ten most-meaningful architecture moments from a exceptionally topsy-turvy decade. Apologies to any readers or architects who disagree with my findings. Without doubt, this has been one of the more challenging assignments I've accepted this year, possibly this decade.

Undoubtedly, each of these projects (now that you've hopefully had an opportunity to view them), is groundbreaking and remarkable in its own way. However, architecture of the decade ended bearish, and in my opinion, is just now moving forward again. 2011 and beyond will be interesting to watch. Fortunately, we have a resident expert on standby, so please be certain to read the sequel feature, Architecture: What's Coming in 2011. 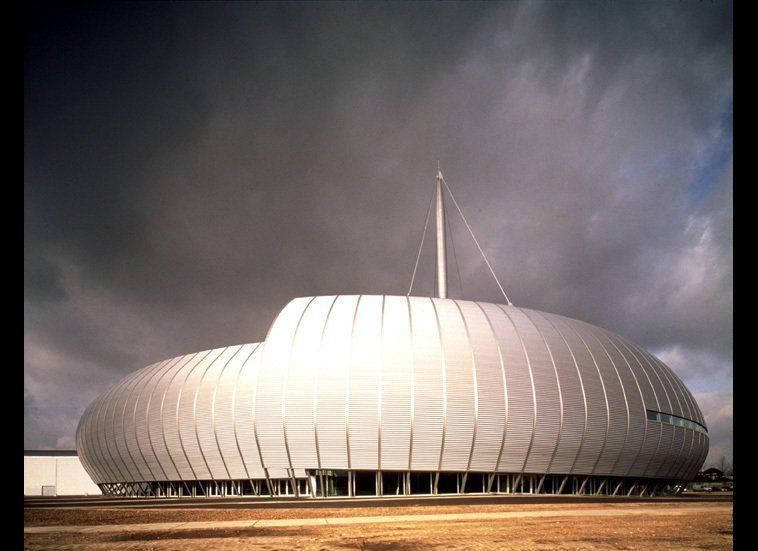 1 / 10
Rouen Concert Hall and Exhibition Complex
Designed by Bernard Tschumi Architects (http://www.tschumi.com/). Rouen, France. 2001. Tschumi is an architect, writer, and educator (former Dean of the Graduate School of Architecture, Planning and Preservation at Columbia University), and his tripartite background comes through in his works. The concert hall aims to foster economic expansion and cultural development to Rouen, a region approximately an hour outside Paris. From the exterior, its shape and use of material feels intrepid. Suitably, the structure comprises three masts that support tension cables, holding the bulk of load across the middle of the span, permitting a lighter interior truss system.