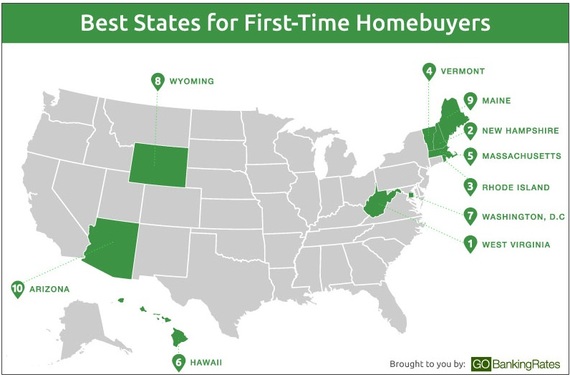 Buying a home is a financial goal that has been delayed for many Americans thanks to the recent recession. With the economy continuing to strengthen in 2015, however, many wannabe homeowners have decided it's time to buy their first homes.

One-third (32 percent) of home purchases made in May 2015 were by first-time home buyers, according to the National Association of Realtors (NAR). Lawrence Yun, chief economist for NAR, called this "an encouraging sign" stemming from "strong job gains among young adults, less expensive mortgage insurance and lenders offering low down payment programs." According to Yun, first-time buyers entering the market will continue to increase.

To see which states offer the best conditions for new homeowners, GOBankingRates ranked the 10 states with the most growth in the number of first-time home buyers, while maintaining lower levels of foreclosure rates, over the past 10 years. Read on for top 10 best states for first-time home buyers, as well as insights into local housing market conditions and public assistance programs.

The low costs of buying a home in this state also make this housing market accessible for first-time buyers. The median sale price in West Virginia is $115,850, reports Zillow, with a monthly payment on a 30-year mortgage costing around $550 a month -- more than 40 percent less than the $950 median rent price.

West Virginia also offers some public programs to help its residents buy their first homes. The Homeownership Program offered through the West Virginia Housing Development Fund can provide up to 100 percent financing for first-time home buyers who meet income requirements. Home buyers can also take advantage of the Down-Payment/Closing Cost Assistance program to secure a low rate on a loan of up to $15,000 to help cover down payments and closing costs.

New Hampshire saw an even greater increase in the number of first-time home buyers than West Virginia. The portion of home buyers in the state looking to purchase a house for the first time increased by 89.3 percent from 2003 to 2013. The state's foreclosure rate is not quite as low, however, at 0.05 percent, which put it at No. 2 on this list.

The median sales price in New Hampshire, $224,700, is also nearly double that of West Virginia. But buying at that price is still cheaper than renting; a monthly mortgage payment is around $1,060 on a 30-year loan compared with the median rent price of $1,250 in New Hampshire.

New Hampshire state programs can be a big help to first-time homeowners, such as the Home Preferred loans that let borrowers get a mortgage with a down payment as small as 3 percent and provide low mortgage insurance coverage for smaller monthly payments. New Hampshire also offers a tax credit of up to $2,000 each year for first-time home buyers.

Rhode Island had the largest amount of growth in first-time home buyers; its rate of this type of borrower nearly doubled -- up by 97.1 percent -- from 2003 to 2013. Foreclosures are also fairly low at 0.06 percent, only slightly higher than New Hampshire's 0.05 percent.

Rhode Island also has a wider gap between typical mortgage payments and rent prices, as reported by Zillow. The median rent is reported at $1,400 while the monthly 30-year mortgage payment is just around $1,030, based on a median sale price of $217,625.

The state's FirstHome lending program makes borrowing more accessible for first-time buyers. It offers no-money-down options and assistance with closing costs. Rhode Island's FirstHome loans also qualify the home buyers for a FirstHome tax credit of up to $2,000 throughout the life of the loan.

Vermont is yet another Northeast state that has seen strong growth among first-time home buyers, with a 48.2 percent rise from 2003 to 2013. The state also has one of the lowest foreclosure rates at 0.02 percent.

The MOVE mortgage credit certificates offered through the Vermont Housing Finance Agency offer low-interest mortgages, lowered monthly mortgage insurance payments and savings on the Vermont Property Transfer Tax. The agency also offers down payment grants that can cover as much as 2.5 percent of the purchase price or loan amount, whichever is lower.

Lastly, there is the local housing market. Vermont's median home sale price is $224,900, which is slightly above the national median of $215,177, as reported by Zillow. This difference doesn't push homeownership too far out of reach, but it could mean that hopeful homeowners might need to save a little longer to afford a house.

The ratio of first-time home buyers in Massachusetts saw a big jump from 2003 to 2013 -- 74.3 percent -- showing more residents in the state are ready to take the leap. The state also has a foreclosure rate on the lower end, showing that its residents have a good chance at retaining homeownership once they've made the commitment.

Zillow reports that the median home value in Massachusetts is $323,800 and the median sale price is $309,500, indicating that Massachusetts residents shopping for a home can currently get a deal and pay below market value. Monthly 30-year mortgage payments based on the median price would also be significantly cheaper than the median rent in the state, at $1,460 versus $2,300, respectively.

First-time buyers in this state can also take advantage of mortgage insurance programs like MassHousing, which offers mortgage payment protection that covers up to $2,000 a month in mortgage and interest payments for up to six months should the borrower suffer a job loss. Another option is the ONE Mortgage Program, which is offered through the Massachusetts Housing Partnership Fund and allows for down payments as low as 3 percent and publicly subsidized loans for up to 20 percent of the home's value.

Hawaii had a 52.8 percent increase in first-time home buyers from 2003 to 2013 and has a lower foreclosure rate at 0.03 percent. In terms of state programs to get help buying a first home, Hawaiians have limited options. But, the state does offer a mortgage credit certificate that can reduce the federal income tax homeowners owe.

Like in Massachusetts, listing prices in Hawaii fall below home values, making it more likely that a home purchase will be a good deal. But the $84,200 difference between the median sale price ($453,100) and median home value ($537,300) is more pronounced in Hawaii. On the other hand, this median sale price is still high and would result in payments around $2,140 a month with a 30-year mortgage, which is on par with the $2,300 median rent price listed by Zillow.

Related: 3 Non-Negotiable Steps to Take Before Signing a Mortgage Loan

When it comes to housing, Washington, D.C., has the highest prices of all the places on this list, with a median sale price of more than half a million dollars -- $511,885. The lower $487,600 median home value also doesn't bode well for home buyers, indicating they'll be trying to purchase in a market that favors sellers. Plus, the median rent price of $2,285 actually beats mortgage payments of $2,420 based on the median sale price. Of course, D.C. is a smaller area than the states surveyed and is a major metropolitan area, so buyers should expect a competitive housing market.

In terms of first-time home buyers, D.C. saw fair growth of 41.7 percent from 2003 to 2013. It has also maintained one of the lowest foreclosure rates at 0.01 percent. D.C. offers several local programs that can help first-time home buyers, such as the Home Purchase Assistance Program. The program provides up to $50,000 in gap financing and up to $4,000 in assistance with closing costs.

With plenty of wide-open spaces to offer its residents, Wyoming's real estate comes cheaper than real estate in many other states. Its median home value is estimated to be $179,000 by Zillow as of May 2015, which is right on par with the national median of $179,200. Wyoming's growth in the portion of first-time home buyers was fairly average at 48.5 percent, but the state has a lower foreclosure rate of 0.03 percent.

Wyoming also provides state-level assistance through the Home Again Program, which offers reduced mortgage rates for first-time home buyers. The state's Down Payment Loan Program can also be a big help to new homeowners; it provides loans up to $10,000 to help cover home down payments.

The median value of homes in Maine, estimated by Zillow to be $118,000, is relatively low -- not only when compared with the national median but especially next to the median home values of neighboring states, such as Massachusetts ($323,800) and New Jersey ($273,700). Even with a reasonable median rent at $1,225, homeownership is still attractive. A 30-year mortgage for a property equal to the state's median home value would cost around $560 a month.

The portion of first-time home buyers in Maine has increased significantly, climbing 51.6 percent from 2003 to 2013. The state's 0.04 percent foreclosure rate is also less than most states. Maine provides a few programs to help home buyers, including the First Home Program. The program provides low-rate home lending, which requires little or no down payment.

Arizona saw above-average growth in first-time home buyers (63.6 percent), but this increase is also paired with a middling 0.06 percent foreclosure rate that pushed the state down to No. 10 on this list. First-time home buyers in the state also lack many public assistance options; however, the Home Plus Home Loan Program can help first-time buyers secure down payment assistance up to 4 percent of the home loan amount.

Arizona is another state that has low home values compared with slightly inflated sale prices. According to Zillow, the median home value is $191,300, and the median sale price is $204,500. The good news is that mortgage payments are still cheaper than renting; a 30-year mortgage on the median sale price would cost around $970 a month, whereas the state's median rent is more than $200 higher each month at $1,195.

Keep reading: 7 Mistakes to Avoid When Shopping for a New Home

Methodology: States were ranked according to the increase in the portion of home buyers who were purchasing their first home when comparing 2003 to 2013 numbers reported by the FHFA, controlling for foreclosure rates reported by RealtyTrac. The states with the highest portion of first-time home buyers ranked higher, as did states with lower foreclosure costs, with the former weighted at a two-to-one ratio to the latter. These two factors contributed to a final score which determined the states' rankings in GOBankingRates' study of the Best States for First-Time Home Buyers.