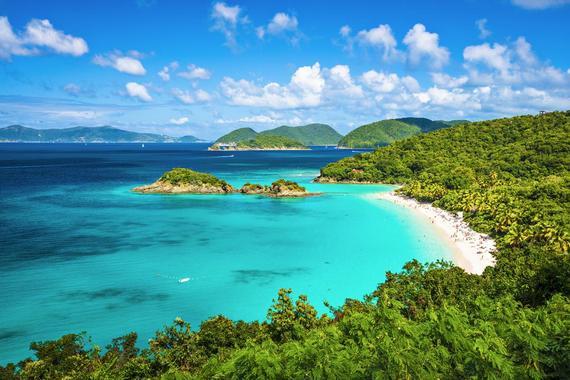 With one of world's largest airport complexes on their doorstep, making a jaunt to the sun-kissed beaches and shimmering sands of the Caribbean has never really been a problem for New Yorkers. In fact, there are countless airlines now connecting the Big Apple with the tropical sands and sultry colonial towns of the much-coveted region, and thousands of travelers make the hop down south for a spot of rest and relaxation every year.

That said, for travelers with a budget to stick to, the Caribbean has never been a gift, meaning costly hotel rates and plenty of competition for the best air fares. That's why we've put together this list of the 10 cheapest flights from New York to the Caribbean, on average, to get passengers to the beaches of the USVI, or the verdant mangroves of Tobago for less.

Crowned by the grand fortress of Castillo San Felipe de Barajas, peppered with honorific monuments to Bolivar, adorned with an endless cascade of charming colonial buildings, and home to the bubbling Bocagrande peninsula, where fashionistas sip coffees in chic cafés and jet setters strut their stuff up and down Saint Martin Avenue, Cartagena is every inch the enchanting Caribbean city it's said to be, and with flights for New Yorkers coming in at just $464 round trip this year, it's even more difficult to resist than ever.

Flight is 5 hours and 5 minutes, on average, direct on Avianca or JetBlue.

For New Yorkers eager to explore one of the wilder corners of the Caribbean this year, these connections to the island of St Croix in the US Virgin Islands may just be the perfect thing. For one, their $392 average price tag is never going to break the bank, while they drop passengers in the midst of some of the region's less-trodden terrain, comprising of sprawling rainforests, rolling surf, pristine coral reefs and the occasional rum distillery for good measure!

Flight is 6 hours and 50 minutes, on average, connecting on American or JetBlue.

With all of American Airlines, Delta Air Lines and US Airways now offering direct flights from New York's JFK to the town of Charlotte Amalie, it's hardly surprising that these connections to the US Virgin Islands come in at the competitive average of just $370 round trip. Once on the ground, travelers can head out to the pristine beaches of Saint Thomas, or linger in the capital for a while, between the sparkling jewelry shops and classy bars of Red Hook.

Flight is 4 hours and 25 minutes, on average, direct on American or Delta.

7. Fly from New York to Providenciales, Turks and Caicos, for $359 round trip

Unlike in many of the other archipelago nations that make up the Caribbean, the islands of the Turks and Caicos are largely uninhabited and undeveloped, which is probably why they have become a haven for romantic holidaymakers and honeymooners looking for a spot of seclusion in the tropics. If that sounds like you, then perhaps these bargain round trip tickets from JFK to Providenciales are the perfect thing, boasting an average yearly price tag of just $359!

Flight is 3 hours and 50 minutes, on average, direct on JetBlue, Delta or United.

Searching for the cheapest flights to the Bahamas? Download Hopper's new mobile app to set up airfare alerts now!

Why not follow in the footsteps of the old Caribbean buccaneers with a trip to the capital of the Bahamas this year? Although chests of gold coin may not be on offer any more, you can rest assured there are plenty of bustling cocktail bars, earthy holes-in-the-wall touting super fresh Bahamian dishes, and historic colonial sites left over from British rule. Oh, and did we mention that flights should only cost in the region of $321?

Flight is 3 hours and 12 minutes, on average, direct on JetBlue or Delta.

5. Fly from New York to the Cayman Islands for $320 round trip

Dropping passengers just a stone's throw from the celebrated stretches of the appropriately-named Seven Mile Beach in the heart of Grand Cayman, these connections from New York's JFK are perfect for any travelers eager to hit the Caribbean sands as soon as possible. What's more, their average yearly price tag of just $320 round trip should help plump up the budget in preparation for those all-inclusive hotel resorts, jet setter cocktail bars and celebrated Georgetown bistros.

Flight is 3 hours and 55 minutes, on average, direct on JetBlue or Cayman Airways.

4. Fly from New York to Port of Spain, Trinidad and Tobago, for $306 round trip

The last of our super-cheap connections between New York and the Caribbean to land travelers outside of the US enclave of Puerto Rico occupies a tantalizing fourth place here, boasting a yearly average fare of just $306 return. When joined with the prospect of Tobago's swaying coconut palms and shiny white beaches, and Trinidad's shadowy mangrove forests, it's hard to deny that it's a pretty attractive offer, particularly with the aromatic Indian eateries of Port of Spain so high on the itinerary.

Flight is 5 hours and 25 minutes, on average, direct on JetBlue or Caribbean Airlines.

3. Fly from New York to Aguadilla, Puerto Rico, for $302 round trip

Why not scratch that surfing trip to the chilly beachfronts of Long Island and hop on one of these bargain connections to Puerto Rico's western coast instead? Not only do tickets on the route cost an average of just $302, but passengers can rest assured that some of the most famous surf spots in the Caribbean await them on arrival; from the rolling left and righters of Crashboat, to the unforgiving swells of Rincon to the south.

Flight is 3 hours and 50 minutes, on average, direct on JetBlue.

As the lone airline offering direct and indirect connections between JFK and Puerto Rico's southern city, budget carrier JetBlue should be commended here for taking our average yearly ticket prices below the $300 mark. Once on the ground, passengers can expect to experience one of the island's more laid-back metropolitan centers, complete with its own array of pretty colonial frontispieces, a smattering of excellent museums and great connections to the secluded beaches of Guanica along the coast.

Flight is 4 hours, on average, direct on JetBlue.

With its gorgeous colonial old town, wealth of luxurious and romantic five-star hotels, UNESCO-attested cliff top fortresses, bustling shopping streets, energetic nightlife laden with Spring Breaker and local alike, and unrivaled access to the jungles and beaches of greater Puerto Rico, San Juan really is one of the most accomplished, all-round holiday destinations in the region. What's more, it's the cheapest option for travelers out of JFK overall, with an average yearly price tag of just $255 round trip!

Flight is 4 hours and 5 minutes, on average, direct on American, Delta or JetBlue.