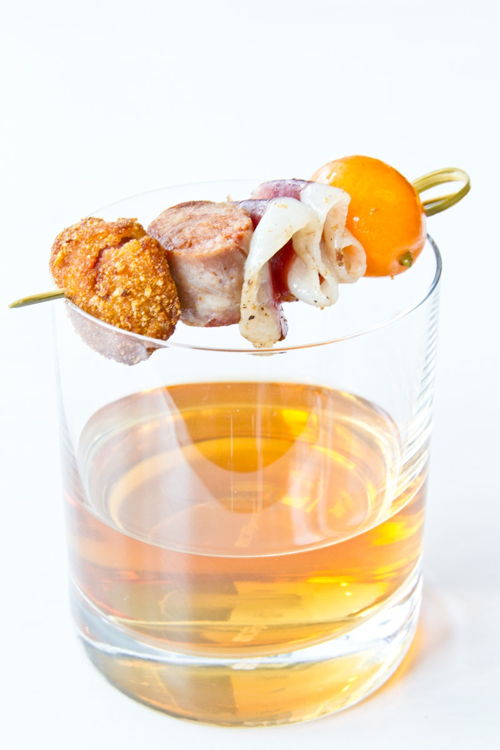 3. The Red Snapper, created by Demitri's®: 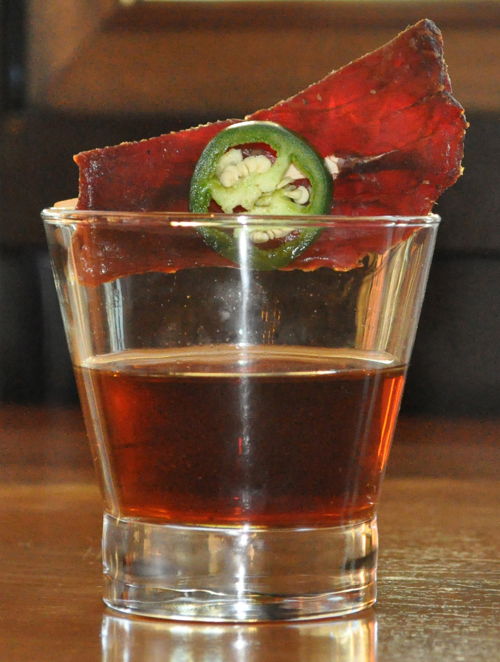 7. The Triple B, served at Portland's Original Dinerant:

Pastry chef Sally Bowers worked with the restaurant bar's staff to create this boozy shake, which gets its name from its blend of bourbon-bacon maple syrup, vanilla ice cream and bourbon, topped with whipped cream and candied bacon:

"I use the smoked bacon in this drink to balance the bitter and sweet that is already in the drink itself to hit all parts of the tongue and create a taste that changes every sip," explains chef Aaron Rock, who forages the madrona bark himself before cooking it down slowly in sugar-wate; the result is a Western alternative to maple syrup. Find his recipe for this cocktail below.

10. The Hamlet, created by me and served at my house:

I devised this ham-and-cheese cocktail using whiskey, half-and-half, simple syrup, aged cheddar cheese and prosciutto. I couldn't decide whether to call this liquid quiche a Manhamtan, a Cheesy Mary or a Hamlet and finally settled on the latter. 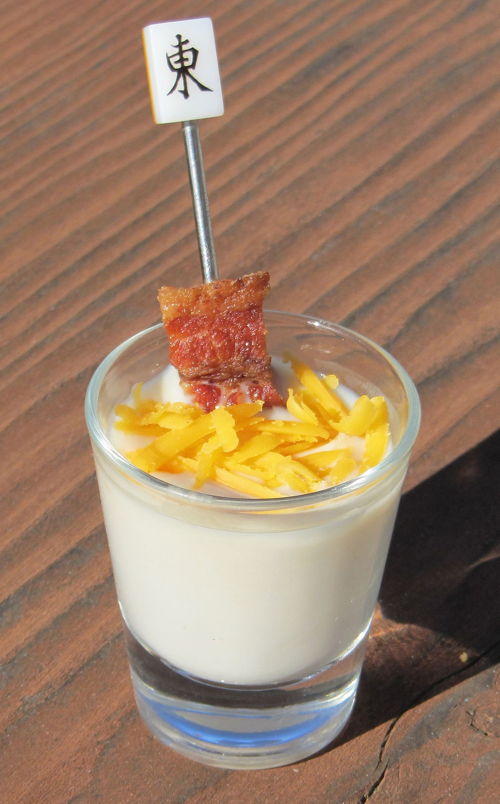 Granted, the mating of meat and alcohol usually goes the other way around: alcohol into meat, Burgundy into beef burguignon, mirin into sukiyaki -- not meat into alcohol. Because May is National Barbecue and Burger Month, the folks at Boston Beer are urging everyone to make barbecue sauce and even ketchup using Boston Lager craft beer as an ingredient. (For the beery ketchup, mix two parts ketchup, two parts mayonnaise and four parts beer.)

But even the folks at Boston Beer have been seduced into the absolute perversion of meat-into-alcohol rather than alcohol-into-meat. Two years ago, they partnered with celebrity chef David Burke to create an Oktoberfest-style beer containing grilled beef hearts. It was briefly served at Burke's restaurants.

"One way to get meat in a cocktail is with fat washing, which is usually done with bacon fat -- preferably something super smoky like Benton's," says Katie Loeb, who tends bar at Sophia's in Philadelphia and is the author of Shake, Stir, Pour: Fresh, Homegrown Cocktails. "I'd do a bacon-fat wash on a bottle of Bluecoat, then make yummy Red Snappers," says Loeb, who shares with us some recipes; see below.

Body and spirit -- bonded in so many ways.

Ingredients: 3 or 4 slices bacon, or enough to render 1 ounce of fat (Benton's is a favorite for this, but any extra-smoky variety will do); 1 750-ml. bottle of spirit.

Method: Cook bacon in pan and reserve rendered fat. When bacon fat has cooled a bit, pour off one ounce from pan. Pour spirit into a non-porous container. A big cleaned jar works well for this. Strain the bacon fat into the container and infuse for 4 to 6 hours at room temperature. Place mixture in freezer until all the fat is solidified. With a slotted spoon, remove fat and strain mixture back into bottle through a gold coffee filter to remove any burned bits or small globules of fat.

Method: Mix all the ingredients together in a large container and whisk vigorously to combine, or blend by pulsing gently in the blender until thoroughly combined. This keeps very well when refrigerated; however the spices and horseradish will separate and fall to the bottom of the container, so be certain to mix thoroughly to combine before using.

Katie Loeb's Smoky Red Snapper
Basic proportions are 1 part spirit (2 oz.) to 2 parts mix (4 oz.). Roll between mixing glasses to combine. Never shake tomato juice; it gets a weird texture. Or make by the pitcherful with same proportions. Serve over ice in tall glasses. Garnish with a lemon wedge, celery stalk or a crisp slice of bacon across the top of the glass.