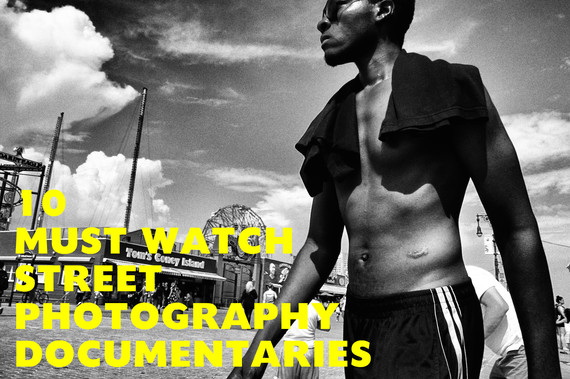 1) The Many Lives of William Klein

I've always been a fan of William Klein. His early New York gritty, black and white photographs are what opened the door to much of what we consider "street photography" today. Prior to Klein's trailblazing in this area things like blur, skewed crops, busy frames, and even soft focus were all rather unacceptable. Early editors called Klein's work "shit", which tells us all we need to know about photo critics. Klein's personality - like his photographs - is edgy and blunt. Enjoy this fantastic full-length documentary on one of the true legends of the street.

Who doesn't love Eggleston? William Eggleston, like most of the photographers featured here, is a pioneer when it comes championing a new style or approach in photography. Eggleston is know for introducing color to the world of art photography. Prior to his work, much of color photography was either commercial or personal. Additionally, Eggleston made the "banal" interesting; this is seen most famously in his photograph of the red ceiling.

Cartier-Bresson needs no introduction I'm sure, especially if you've found this page. He is, to all intents, the father of street photography. Most noted for his concept of the "decisive moment", HCB believed that a great photograph is largely made by knowing exactly when to activate the shutter - by recognizing the precise fraction of a second when everything is aligned. Whether caught on film by chance or by decisiveness, indeed there is that special moment when a scene becomes a photograph.

Joel Meyerowitz is a fantastic photographer and a genuine old-fashioned gentlemen also. Working much of his early career at the epicenter of street photography - New York City - Meyerowitz roamed the sidewalks of Manhattan armed with a Leica. He too was an early proponent of color photography. More recently Meyerowitz has been doing a lot more deliberate work and all over the world with notable stuff coming from Italy. Joel Meyerowitz, now 77 years old, is still active and producing and publishing photography.

Garry Winogrand is a name often heard in street photography conversations. Winogrand was a machine gun photographer before there was such a thing. Now, in the digital age, more photographs than not simply aim their cameras and hold down the shutter button. Burst shooting is more common than blue jeans. But, imagine working this way on 35mm film? This was the case with Winogrand. At the time of his death Winogrand left over 10,000 rolls of undeveloped and or unprinted film. This is only the stuff that was yet unexplored!

Although somewhat lesser known, Mark Cohen is a true pioneer when it comes to street photography. His work has largely influenced much of my own. Perhaps best known for his "fragments" of people and things in a rather close-up perspective, Cohen has been at work for many decades and is still photographing in the hills of Pennsylvania. In fact, that is another thing he exemplifies greatly - the ability to make street photography in small towns and even rural settings.

Moriyama is another living legend when it comes to street photography. With many decades of work behind him, Moriyama is still producing photographs in his signature style - snapshots from cheap cameras. Although Daido famously used the Ricoh GR 35mm series for many years, he has been more recently spotted with a compact digital Nikon. Moriyama's work is not all classically street - but there is no denying that he has influenced this genre tremendously. His work is gritty, high-contract and always monochrome. Moriyama might describe his work as a "life diary".

8) The World According to Martin Parr

Martin Parr has told me that he objects to being called a "street photographer", or, at least he doesn't feel that it aptly describes him or his work. Despite this, there is no denying that he has influenced a huge number of street photographers. He is highly emulated. His work is also fresh and unique in many ways, especially some of the early stuff. A wonderful man and a photographer per excellence. If you don't know his work, and many might not, especially in North America, look him up - you'll be glad you did.

I want to mention Mary Ellen Mark here for a few reason. One, she's a woman and we need more women represented in the genre. However, I don't simply mention her on this basis, her work stands on its own merit. Although not strictly, or more precisely, exclusively, a street photographer, Mark has put in her time on the street. The work is characterized by a gentleness that we often don't see in more contemporary street work. Mark connects with her subjects in a very intimate way and this always shows in her work.

Robert Frank is an unusual character. At age 90, he is still at work making and publishing photographs. He mostly uses a Fuji Instax camera now, but the point is that he is still tripping the shutter after all these years. He's more or less abandoned New York City and spends his time by the sea in a little place called Magog, Nova Scotia, Canada. Frank is a notorious recluse and rarely gave interviews. This particular full-length documentary is a rare opportunity to see into the life of this creative genius.