The word miracle is much used--and abused. It comes from the Latin miraculum, meaning "wonder." It is usually defined as an event that is inexplicable by natural laws, and is therefore attributed to the supernatural, usually to divine intervention. But the definition depends on negative rather than positive evidence, and represents a logical fallacy called arguing from ignorance (that is, from a lack of knowledge).

Here are examples of this fallacy: "We don't know why this statue is weeping; therefore, it is a sign from God." Or, "Her doctor can't explain why her condition suddenly improved, so it is surely a miracle." Or yet again, "The stigmata of this person are inexplicable and can only represent a true miracle."

Thorough investigation of such cases, however, does usually reveal a naturalistic explanation--or at least a probable one. When mystery remains, it is usually because of a lack of evidence (the event may have happened long ago) or lack of access to it (permission to examine or test an object may be withheld).

Now in my fifth decade of investigating and explaining miracle claims, I attempt to avoid the approach of either "believers" or "debunkers" who typically start with the desired or expected answer and work backward to the evidence. Instead, I employ my skills as a former stage magician, private detective, and science writer as well as a scholar with doctoral studies in literary investigation and folklore. The character played by Hilary Swank in the 2007 movie The Reaping was based partially on my work as a miracle detective. (Warner Brothers even invited me onto the movie set to watch some of the filming and to meet the engaging actress.)

I use some basic principles. One is the old maxim that "extraordinary claims require extraordinary proof"--that is, that the evidence must be proportional to the claim. Another principle is that the burden of proof lies with a claimant--not on someone else who must attempt to prove a negative. Still another principle is known as Occam's razor (named for fourteenth-century philosopher William of Ockham). It holds that the simplest tenable explanation--the one with the fewest assumptions--is to be preferred.

I apply these principles in my new book, The Science of Miracles: Investigating the Incredible. While "miracles" are often attributable to illusion, confusion, or even delusion, some are deliberately faked, like the historical sampling presented here in photos and text.

Unfortunately, while a few are now merely curiosities of the past, others continue to deceive, promoted by pseudoscience and zealotry. They obscure the otherwise overwhelming evidence that we live in a real, natural world. 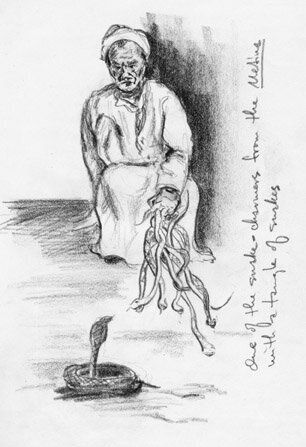 1 / 10
1. Rod-to-Serpent Transformation
From the most ancient times, snake charmers have performed tricks and stunts with snakes, like the performance I once sketched in Morocco (see accompanying drawing). Indeed, the first publicly performed magic feat in the Bible involves snakes. It occurs at the Egyptian pharaoh’s court, where brothers Moses and Aaron seek to free their fellow Jews from slavery. “And Aaron cast down his rod before Pharaoh . . . and it became a serpent.” But the ruler called forth his sorcerers, each of whom duplicated the feat (Exodus 7:8–12). Now this event has been considered a miracle from God (doubtful, since the Egyptian magicians could also perform it) or a fairy tale. That appears to be a false dichotomy, because snake charmers have used the feat in their performances. Ancient conjurers likely carried staffs that resembled the serpent of choice, so a clever switch could be made. Then—as described by my late friend Premanand, the Indian magician and skeptic—the performer holds the tail and head of the snake, stretching it straight, while pressing firmly on the head with the thumb and forefinger. This causes the snake to go rigid and so resemble the rod—until it is thrown to the ground.