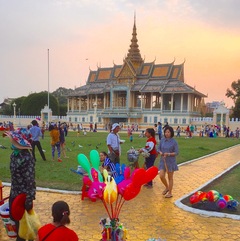 The Kingdom of Cambodia is a truly exotic and enigmatic country, often remembered for the brutal Khmer Rouge in the 1970s but now one of the world's hottest up-and-coming travel destinations. Politically stable for more than twenty years, there is so much to do and see in the Southeastern Asian nation, from pristine beaches and islands in the south to Angkor Wat in Siem Reap up north, one of the Wonders of the World and the largest religious site on earth. But still, there is no place quite like Phnom Penh, Cambodia's magnificent capital city.

"We now have about 5 million tourists visiting Cambodia every year," said Kalvin Heng of the Phnom Penh Post newspaper, "And once people experience Phnom Penh, they realize why it was called The Paris of the Far East." 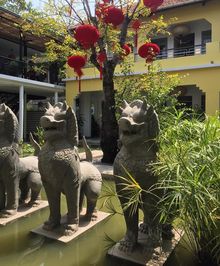 The vast majority of tourists in Phnom Penh visit the popular attractions like the Killing Fields, the Royal Palace, museums, various pagodas (called 'wats'), and the Independence Monument. But Phnom Penh also offers fun and fascinating things to do that aren't always on the typical traveler agenda.

If you have weeks to explore, I highly recommend getting lost on purpose amid the city's hidden treasures. But if you only have a few days to see Phnom Penh, go visit some (or all!) of these landmarks that most tourists never get to appreciate: 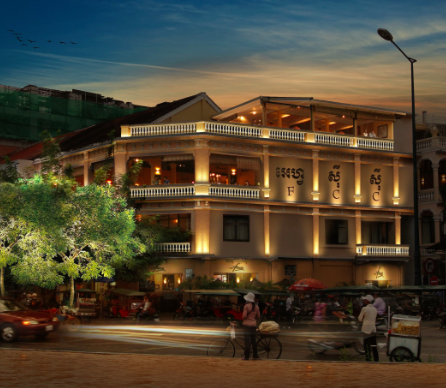 1. Rooftop bars
High above the hot and chaotic city streets of Phnom Penh stand a great variety of rooftop lounges, bars, and even swimming pools where you can sip a cold beer and watch the action below. Le Moon is really nice with a great view of the Tonle Sap River, and the Foreign Correspondent's Club (FCC) is a piece of Phnom Penh history where foreign journalists and aid workers used to congregate during the war. The rooftop bar above the Top Banana hostel is a fun backpacker destination, and one can view the lights of Phnom Penh from 23 floors up at the Eclipse Skybar in the Phnom Penh Tower. 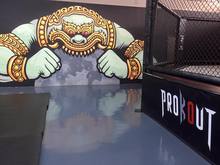 2. Watch a Cambodian kickboxing bout - or train, yourself
The Cambodian fighting art is called 'Khun Khmer' and while it's not quite as popular as Muay Thai in neighboring Thailand, the locals still love it. There are live fights every weekend at the CTN Angkor Arena at the television station, where every tuk-tuk driver will enthusiastically take you.

But I encourage you to put on the gloves and train at Khun Khmer or martial arts yourself, even if you're a total beginner. There is a narrow second-story gym at the Selapak cultural center on 110 Street that's fantastic (with traditional Khmer dancing on the first floor), and Prokout near the Aeon Mall rivals any top-rate western gym. 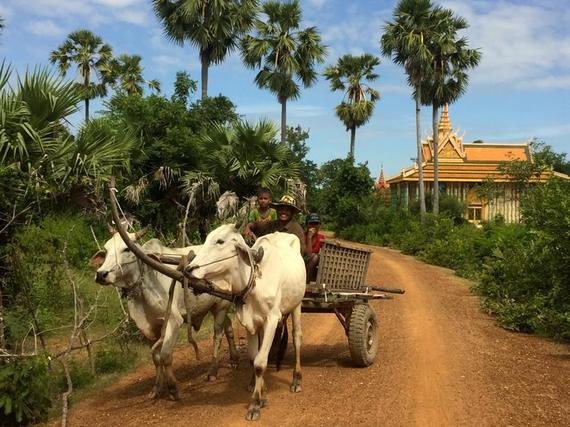 3. Oudong and other nearby provinces
Only a 25-mile bumpy tuk-tuk ride outside of the city you'll find yourself in Oudong, a green oasis that will feel like you've transported back in time. Until 1866, Oudong was the capital of Cambodia and the royal residence, and there are still monuments and temples among the rolling foothills with amazing views. Likewise, day trips to the various provinces of Kampong Speu, Takeo, and Kampong Chhnang Provinces will reveal ancient temples, natural parks, historical points of interest, and even an island on the Mekong River known for it's silk weavers. 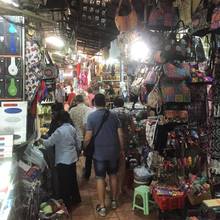 4. Markets and more markets
Southeast Asia is known for its fun and lively (and cheap!) markets, and Phnom Penh is no exception. Most tourists visit the little night market along the riverside or the Central Market, an easily recognizable yellow domed art deco building. But if you want a true local adventure, head into the Old Market or brave the Russian Market (Tuol Tom Poung), which was given its nickname in the 1980s because so many Soviet foreigners visited. You'll find them insanely hot, crowded, and full of hidden surprises, so bring a water bottle, a lot of small Reil bills, and your intrepid spirit.

One of my favorite small shops for souvenirs is Yodi Craft on Street 13 near the National Museum. It's run by a non-profit that gives disabled Cambodian people a chance to earn a fair wage and improve their lives by designing wonderful handmade crafts. 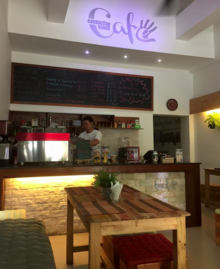 5. Eat for a good cause
There are so many great restaurants, bistros, eateries and cafés in Phnom Penh that it's truly a gourmand's dream. But you can actually eat well AND make a positive impact by visiting the establishments that give humble or disenfranchised local people a chance to work instead of just accepting donations or begging.

Dine in the Dark offers probably the most unique culinary experience you'll ever have and employs sightless Cambodians. The Connecting Hands Café on street 178, only a couple blocks behind the Royal Palace complex, draws rave reviews for employing and empowering women who are rescued from trafficking or domestic violence. (Try the fruit smoothies, and the chicken pineapple burger is delish!) 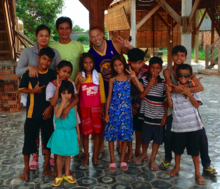 6. Enjoy the community at sundown
In the late afternoon when it starts to cool off, nearly everyone in Phnom Penh - locals, expats and tourists alike - come out to play and hang out in Phnom Penh's many parks or common areas. You can stroll up and down the riverside boulevard (Sisowath Quay), taking in the French colonial architecture, meander through the city's parks, or even have a picnic on the front lawn of the Royal Palace amid thousands of smiling and friendly Khmer people. Feel free to join them kicking a soccer ball, playing footbag, badminton, join in an outdoor dancing exercise class, or just relax and chat with your new friends.

7. Ice skating in tropical Cambodia?
You didn't read that wrong - there really are ice skating rinks in Cambodia. The Ice City Skating Rink is located at the Sovanna Shopping Center and KidsCity Asia is at the Aeon Mall and also offers laser tag, bumper cars, and a cool rock-climbing wall for the kids. (Don't worry - you can rent skates.) 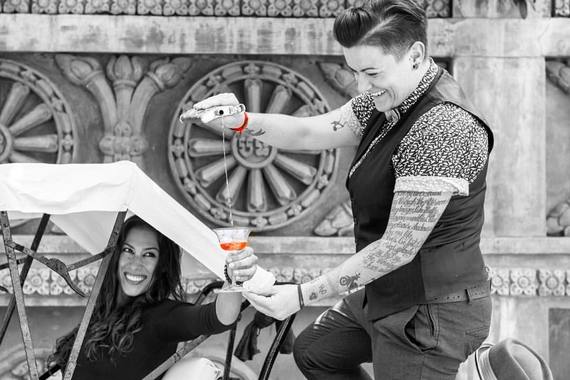 8. Learn how to say "Cheers" in Khmer (Cambodian)
If you're thirsty after all of this touring in the hot sun, cool off and loosen up at one of the fun, funky, and always surprising watering holes in Phnom Penh. The Chinese House on the south end of the riverside is a historical landmark and has a stellar Sunday brunch, Hangar 44 is what every Hard Rock Cafe wants to be when it grows up, and Plantation on 184 Street is a remarkable combination of art gallery, traditional water garden, and bar and restaurant - all set poolside in a boutique hotel.

La Casita, the avant-garde tasting room of Southeast Asia's premium spirit brand La Familia, is a where you'll sample some of the best cocktails in the world, as well as enjoy classes, competitions, and craft cocktail appreciation nights. (And the buzz on the Phnom Penh streets is that they're opening a bar on 308 Street called the Elbow Room soon.)

9. Volunteer
If you feel like giving back to the wonderful people in impoverished Cambodia, there are plenty of noble non-profits, charities, and NGOs in Phnom Penh that welcome volunteers. I've personally worked with Kids at Risk Cambodia, the Japanese non-profit HERO, and AFESIP Cambodia and had great experiences. Just make sure to do your research first so you know it's credible. You'll also want to arrange your visit ahead of time because any good organization will need to screen you per their safety protocols. 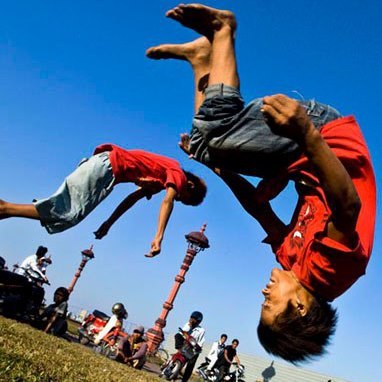 10. Check out the Cambodian hip-hop scene
Hip hop in Cambodia? You got it, as many young Cambodians (some of whom used to live in the United States since their parents were war refugees) rap, dance, and spin a lively brand of U.S. hip-hop mixed with traditional Khmer melodies. So if you want to get your boogy on, check out a Clap Ya Handz event, visit the Pontoon Club on 172 Street late night, and follow famous Danish-Khmer DJ Niko Yu as he spins at different venues around town.

For a unique musical experience, visit Tiny Toones, a NGO that takes poor and at-risk kids and gets them off the streets with hip hop and breakdancing, making sure they receive a proper education and job skills along the way.

***
We're still just scratching the surface of what Phnom Penh and Cambodia have to offer, so feel free to email me if you have any questions and I'd be happy to help, or check out my many other blogs about Cambodia and traveling in Southeast Asia at NormWrites.com. 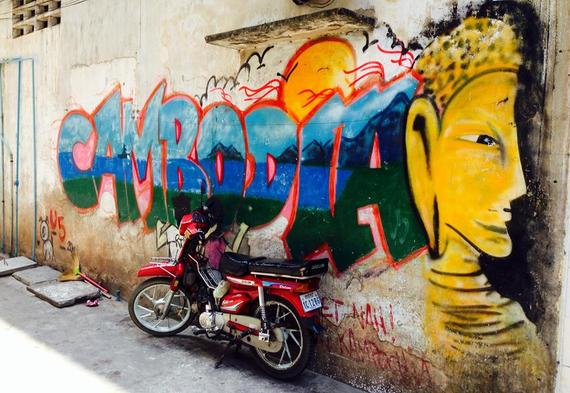