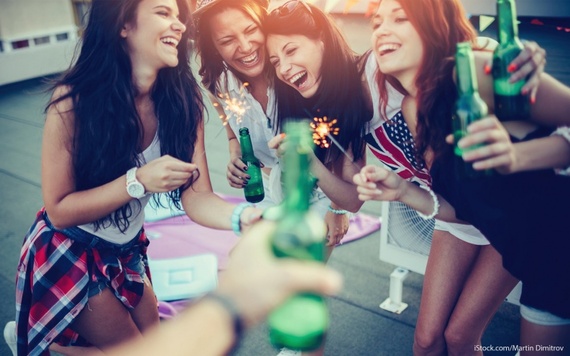 Mention the words "bachelor party," and images of wild parties and scenes from "The Hangover" probably come to mind. But debauchery isn't the only thing that goes hand in hand with the groom's last night of freedom. Bachelor parties also can come with a big price tag -- as do bachelorette parties.

GOBankingRates found in a recent survey that the biggest expense for both groomsmen and bridesmaids is the bachelor or bachelorette party. Groomsmen are especially big spenders, though. The average amount they reported spending on a bachelor party is $681.13; whereas, bridesmaids spend $437.31, on average.

When planning a bachelor or bachelorette party, keep these costs in mind. And if you want to party in a big city, pick a destination that's fun -- but also affordable. To help you out, GOBankingRates surveyed various cities to see which ones offered the best combination of fun activities in a safe environment at affordable prices. Click through for the 10 best and worst places for bachelor and bachelorette parties if you're trying to save money.

Although many of these destinations offer tons of entertainment options for bachelor and bachelorette parties, the cost of getting there and staying there is high. Plus, most of these cities have a low safety score -- the lower the score, the less safe a city is.

Related: 5 Wedding Budget Questions You Need to Ask Your Fiancé

You can listen to live music all day, every day and pay no cover charge at many of the honky tonks in Nashville. And the cost of beer in the Music City is slightly below the average price in the cities on this list. But getting to and staying in Nashville is downright expensive.

Airfare to this destination is among the highest on the list, and the average hotel price for two nights is the second highest.

There's no shortage of things to do for a bachelor or bachelorette party in San Juan, which has more than 200 entertainment options, such as casinos, nightclubs and music venues. At just $2, the average price of beer is cheap, and it will cost you less to get to this Caribbean island and stay two nights than many of the other destinations on the list.

But Puerto Rico's capital and largest city has the lowest safety score in the rankings, which is why it's one of the worst destinations for a bachelor or bachelorette party.

Miami is known for its nightclubs. And the partying isn't just confined to the famous South Beach -- there are hot spots for dancing, music and drinks in other areas throughout the city.

Although there are lots of ways to keep a bachelor or bachelorette entertained -- and hotel rooms are relatively inexpensive in Miami -- the average cost of beer is higher here than in other destinations in the rankings. And, it's one of the least safe spots.

San Francisco is also known for its clubs where you can dance all night to house and techno music. But, it can cost more to fly to this hip city than most of the destinations on this list. And, the average cost of beer is higher in San Francisco than another other city in the rankings -- other than New York.

There's no shortage of things to do for a bachelor or bachelorette party in New York -- from legendary clubs and intimate lounges to Broadway shows and world-class shopping. But a night out in the biggest city in the U.S. won't be fun for your budget.

New York has the highest average beer price -- along with San Francisco -- on the list. Plus, the cost of airfare to New York is higher than all but one of the other destinations in the rankings.

Milwaukee is known for its beer, but it's also home to the "world's largest musical festival" -- Summerfest, an 11-day event with more than 1,000 performances.

However, if you want to spend your bachelor or bachelorette party drinking brewskies or listening to music in Milwaukee, you'll have to shell out a lot for a hotel room. Plus, this city has a low safety score.

New Orleans might seem like the ideal destination for a bachelor or bachelorette party because the bars and clubs tend to stay open all night. You can soak up the nightlife along Bourbon Street, or you can try your luck at the casino at Harrah's New Orleans.

However, New Orleans ranks among the worst bachelor and bachelorette party destinations because hotels are pricey, and it has one of the lowest safety scores on the list.

Hotel costs and airfare aren't outrageous, but a low safety score pulls Chicago down in the rankings. Otherwise, this city can be a good party destination if the groom or bride likes music.

You can hear live music seven days a week at venues throughout the city or attend one of the many annual music festivals, such as the Chicago Blues Festival or Lollapalooza.

This tiny island at the tip of Florida is teaming with bars and nightlife. It also has an impressive restaurant scene and an annual food and wine festival in January.

But, you'll pay a lot to spend your bachelor or bachelorette party sipping tropical drinks in this island paradise. Key West has the highest average hotel price in this ranking. At $5, the average cost of beer is also higher here than in many other spots on the list. And, Key West has one of the lowest safety scores.

If you want to hang out on Beale Street in Memphis to listen to blues, dance in a club or drink in a dive bar, you better have deep pockets for this bachelor and bachelorette party destination. The average hotel price and airfare is higher than many other cities in the rankings. Plus, Memphis has the second-lowest safety score on the list. All of these factors make Memphis the worst bachelor party destination.

If you want to have fun at an affordable price, consider these 10 cities. Hotel prices and airfare to these spots tend to be more affordable. And, these destinations are safer while offering fun activities for brides and grooms.

It might not be the first city you think of when you hear "bachelor party," but you might be surprised by how much fun a bachelor or bachelorette party can be in Myrtle Beach. There are some resorts in this beach city, and if the bride or groom enjoys water sports, you could spend a day jet skiing, kayaking, scuba diving, parasailing and more.

As an added bonus: beer is cheap in this city, and hotel rooms are relatively affordable as well. Just watch out for flight costs in and out of nearby Charleston.

And it helps that Vegas can be pretty affordable -- as long as you don't spend too much at the black jack tables. The average hotel price and airfare is lower than most destinations in the rankings. But, a lower safety score and pricey beers pull Las Vegas down in the rankings.

Bachelors and bachelorettes can spend the night sampling microbrews, dancing in clubs or listening to live music in Seattle. Although hotel prices aren't cheap, flights to this Northwestern city are relatively affordable. And, it's safer than many other spots on this list.

Airfare to Atlantic City is cheaper than any other destination in this rankings. And, this city has plenty of bars, clubs and, of course, casinos that make it a fun bachelor or bachelorette party destination. However, its low safety score pulls it down in the rankings.

During the day, you can hang out on the beach then hit the nightclubs with celebrity DJs in this Southern California city. In the Gaslamp Quarter, you'll find live music, rooftop bars and comedy clubs. Or, you can relax at one of the city's spas, go wine tasting or take a brewery tour.

To top it off, hotel prices are affordable, and San Diego is one of the safer destinations on this list.

Montreal has the second-lowest average hotel price in this ranking, but flights to this Canadian city can be a little more pricey than to other destinations. This city, which is full of "old-world charm," has a strong restaurant scene -- perfect if your bachelor or bachelorette is a foodie. The city also plays host to numerous types of festivals throughout the year, and nightlife is abundant.

This Canadian city has its own version of the Las Vegas strip on Granville Street, which is packed with bars, clubs and live music venues that stay open late. Plus, the average hotel price in Vancouver is among the lowest in the rankings. The city also is one of the safest on the list.

Bachelors and bachelorettes can find a nightlife scene that caters to all types in Dallas: live music, sports bars, comedy clubs and more. There's plenty of fine dining at restaurants run by celebrity chefs as well. And, hotels and flights to this Texas city are affordable.

The second-safest city in the rankings, Denver also boasts one of the lowest average hotel rates. The Mile-High City offers brewery tours, museums and plenty of outdoor adventures to stay busy during the day. At night, bachelors and bachelorettes can sip cocktails in cool lounges, dance at a nightclub, stomp their boots at a country bar or watch a burlesque show.

This Mexican city is known for its beaches, nightlife and as a hot spring break destination for college students. But, it's also an affordable party destination for bachelors and bachelorettes. In fact, it's the only place on this list where you can stay two nights for less than $100. Plus, the average price of beer is less than $2.

Because Cabo San Lucas is a tourist hot spot and part of a generally safe area of Mexico, it's not as risky to visit as many other parts of Mexico.

Keep Reading: 7 Ways to Travel Like a Millionaire -- on a Budget

Methodology: To conduct this study, GOBankingRates.com curated a list of popular party destinations sourced from various bachelor party destination lists. Then, four factors were used to determine the best destinations for bachelor and bachelorette parties: average hotel prices, average airfare, the cost of beer and safety. All factors were given a score from 0 to 1, with 0 = best. The cities were ranked from the smallest score (best) to the highest score (worst).

1) Hotel prices: Prices for each city were sourced from Hotels.com for the weekend of 4/29/16-5/2/16 (2 nights). The average of the 3 cheapest hotels that were rated at least 3 stars and were located 3 miles or under to the city center were used and are accurate as of 4/12/16.

2) Average airfare: Prices were sourced from the latest available data from the Bureau of Transportation Statistics. If a city was not available, the closest major city was used. According to the BTS, "BTS reports average fares based on domestic itinerary fares. Itinerary fares consist of round-trip fares, unless the customer does not purchase a return trip. In that case, the one-way fare is included."

3) Cost of beer: Prices were sourced from Numbeo.com on 4/12/16. If prices for a city were not available, the closest major city was used.

4) Safety: The safety index was sourced from Numbeo.com on 4/12/16. If a city was not available, the closet major city was used.

This article, 10 Hottest Bachelor and Bachelorette Party Destinations -- And the 10 Worst, originally appeared on GOBankingRates.com.