Written by Casey Mullins for Babble.com 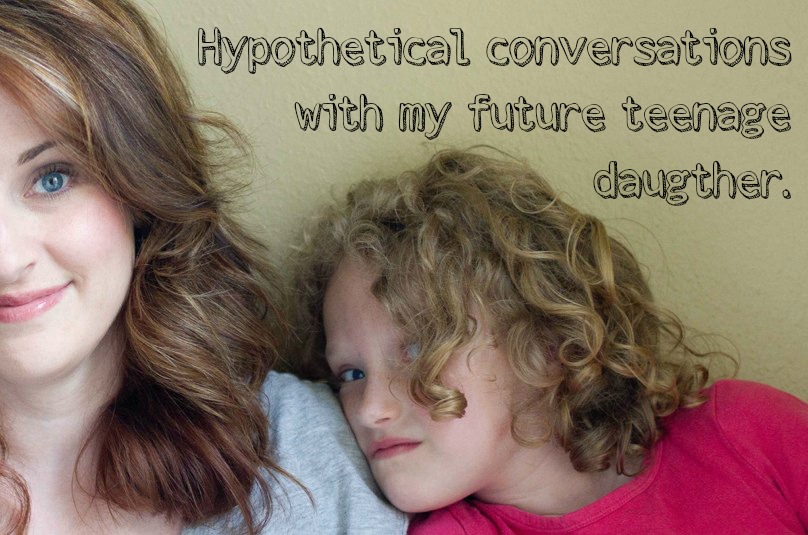 I used to fall asleep dreaming about Tom Cruise when I was 11. When I was in my early 20s, I fell asleep pretending to be an inspiring guest on Oprah. Lately however, I fall asleep having hypothetical conversations with my future teenage daughter. Addie is officially closer to teen than toddler and some conversations have already started to bubble up about boobs, boys and tampons. If it's true that you're supposed to start talking to your kids about the things they need to know five years before they need to know it -- future teenage Addie in my head is educated about a lot.

Related: 10 things a mother should NEVER say to her daughter

However, I've realized that oftentimes, the advice I'd give a current teenager wouldn't be the same advice I'd give to Addie in 8 years. Maybe because I'm the one responsible for her? I don't care if your kid dresses like a tramp and has a misspelled tattoo at 18, but I do care when it comes to mine.

I'd like to think I'd just lay it all out there, very matter-of-factly without any reverse psychology or ulterior motives. I've made mistakes, and chances are Addie is going to make a few, too; it would feel hypocritical to tell her not to do drugs (which she totally shouldn't) but if she does, she should only do ones from trusted sources (bad drugs are a terrible thing, future Addie).

I mean, see my conundrum? Am I projecting too much of myself onto her when she'll never actually go down the same paths I did, and will telling her all this damage her for life? Or is telling her the difference between a shot and a sidecar subliminally giving her permission to go forth and experiment? If she tries new and unusual things, I want her to at least try them safely. But in reality, I don't want her to do anything illegal or dangerous. WHAT DO I DO? So here they are, some of the hypothetical conversations I've had with Addie.

Drugs are really expensive, and not really worth it. There are also all different kinds -- some high quality, some not so much. Using them incorrectly will make you really sick and eventually, despite your best efforts -- drugs will make you dumb.

Maybe not full-on dumb, but it will GREATLY diminish your potential.

Hopefully, you've learned enough from Dad's legal shows by now to never carry drugs with you and never, EVER have drug paraphernalia in your car. (More on this when we get to the section entitled "jail.")

Basically, drugs? SO EXPENSIVE. So dangerous. Don't do it. We'll talk about how I know this later.

If you get arrested I am not coming to bail you out. This isn't some grand "You got yourself into this mess, you can get yourself out" type of thing, it's just what my mom said to me and you know what?

Knowing no one is going to come bail you out is the best motivation to never get arrested in the first place.

Remind me to tell you about the time I pushed my boyfriend out of the way to keep him between the cops and me. He'd been to jail before. I had a perfect record to maintain.

Wear what makes you happy.

Develop your own sense of style that doesn't rely on how much of your cleavage is showing or how short your shorts are.

When it comes to peer pressure, LIE YOUR FACE OFF.

Cigarettes: "Aw man, I tried one once and it made my asthma so bad I had to go to the ER, you don't want that on your hands, do you?"

Drinking: If you're holding a Red Solo Cup, no one should be trying to get you a drink, even if you just have Coke in it. If they taste it and call your bluff, tell them they're too drunk to taste it. You only have to fake it for so long before everyone else is so far gone that you won't even have to worry about elaborate lies.

Drugs: "Dude, that stuff is cut with peanuts and I'm totally allergic."

Shoplifting: "My mom said if I need a thrill, she'd shove me off a cliff."

Basically, you can blame everything on your dad and me if it gets you out of a sticky situation. PLEASE, BLAME US FOR EVERYTHING.

"No, my dad's a lawyer and my mom has rage issues," will solve a lot of peer pressure problems.

I understand the temptation and the curiosity but A) it will just make you feel terrible about yourself and B) SO FAKE.

When you eat bad food your body can and will get rid of it by any means necessary, however when you take bad stuff into your mind, your mind cannot get rid of it. It cannot be unseen and images like those are not ones you want floating around in your brain. Promise.

I have them. Your dad has them. Pretty much everyone has them these days. Our church says you shouldn't get them, and you probably shouldn't -- but in the event that you do, make sure it's awesome.

Make an appointment with a reputable studio, don't just do it on a whim while in Vegas.

Pay good money for a real artist, this is going to be on you FOREVER, treat it as such. Make sure it's something that has DEEP meaning to you, not just something you like at the moment or something that is trendy (echoed by every girl who currently sports a faded butterfly tattoo on her lower back.)

Same with piercings. Do them safely please.

Sex is awkward, it complicates things and it can smell funny. That being said, it can also be pretty damn spectacular when you're with a person who loves and treasures you. There will be a lot of times when sex seems like a really good idea, but I can promise you you'll never regret saying no to the multiple opportunities you will have, however you will regret saying yes to almost all of them.

Say no? Nothing much happens. Say yes? Say hello to the possibility of pregnancies, diseases and reputations.

Don't get sucked into it.

Be the bigger person.

It may not be popular in the moment, but it will show you who your true friends are.
Words hurt, so bad. Screw, "Sticks and stones may break my bones but words will never hurt me." Words can and do hurt worse than all the sticks an stones in the world, don't be the one uttering them.

Treat it like something we all have to do like showering or brushing our teeth? It's no big deal.
Also, buy the good pads and tampons; yes, there's a difference.

10. Learn Everything, Respect Everyone

Never think you're too good to learn something from someone else.

If you have a chance to learn something? Learn it.

Don't mess around in school, take it seriously, respect your teachers.

Don't be a jerk, even in the face of a hundred jerks.

Voting Made Easy
Register to vote and apply for an absentee ballot today
Register now
More:
mother-daughter relationshipParentsThe Talkparents-momsparents-teens
Newsletter Sign Up
Raise the kind of person you'd like to know
Subscribe to our parenting newsletter.
Successfully Subscribed!
Realness delivered to your inbox