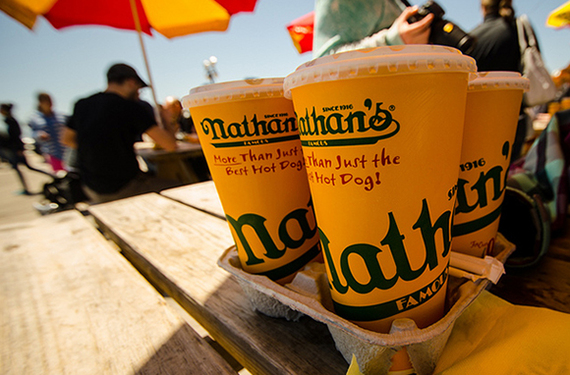 Rediscover your patriotic streak this summer with an iconic American experience. Eat a Fenway Frank at a Boston Red Sox baseball game. Ride the historic 1927 wooden Cyclone roller coaster on Coney Island. Stand speechless at the edge of the Grand Canyon. These 10 nation-defining pastimes and places are nostalgic things you need to experience at least once in your lifetime.

There's no denying America's love for its favorite pastime, especially in Boston among Red Sox fans. Fenway Park is considered hallowed ground, with seats so close to the field that you can hear the crack of the bat and feel part of the game. Babe Ruth pitched here, and a red-painted seat in right field marks the spot where one of Ted Williams' longest home runs landed. Traditions reign supreme at this 102-year-old ballpark. The scoreboard is still changed by hand, and the 37-foot "Green Monster" wall in left field has haunted pitchers for seven decades. Lining up for a Fenway Frank is as much a part of the ritual as booing the Yankees or signing the right-field foul pole with a Sharpie. You'll stand up and sing "Take Me Out to the Ball Game" during the seventh-inning stretch and join the crowd again in the eighth for Neil Diamond's "Sweet Caroline."

Don't Miss: Official Fenway Park tours share the stories of the legends, show you the signatures defacing Pesky's Pole in right field, and give you a chance to sit atop the Green Monster.

It was country music at the Grand Ole Opry that earned Nashville its moniker "Music City" in 1925, and the name stuck. Today Nashville has a higher concentration of people working in the music industry per capita than anywhere else in the world. The Country Music Hall of Fame and Museum is here, and every year the industry's biggest names converge on the city for the CMA Awards. Experience the scene in more than 130 music venues around town, including the world-famous honky-tonks on Broadway. The Bluebird Cafe, which has appeared on the TV series Nashville, is where Garth Brooks was discovered and signed to Capitol Records. To find the live-music venues near where you're staying, download the free Nashville Live Music Guide app.

Don't Miss: This year, the Country Music Hall of Fame and Museum more than doubled its size. Take the museum's RCA Studio B tour to see Nashville's oldest recording studio, where Elvis, Dolly, and the Everly Brothers recorded hits.

Kentucky has accidental aging to thank for the invention of the state's iconic elixir. In the 1700s, farmers started converting corn to whiskey and shipping it down the Mississippi River. The long trip in oak barrels to New Orleans aged the whiskey, giving it the distinct amber color and smooth flavor known as bourbon. Today, the drink of choice of Mad Men's Don Draper is on a comeback. And this year marks the 50th anniversary of Congress declaring bourbon "America's only native spirit"—all the more reason to sip it on the Kentucky Bourbon Trail or Louisville's Urban Bourbon Trail. Start at the Ohio River and work your way across the rolling countryside's Bourbon, Horses & History Region, pacing yourself with stops at horse farms to meet retired equine champions.

Don't Miss: Distillery tours, whiskey museums, and bourbon-chocolate shops are highlights of the trails. Sample a bourbon flight and hear Johnny Cash on vinyl at Louisville's The Silver Dollar whiskey bar. At The Kentucky Horse Park, see more than 50 breeds and take the farm tour.

Before jazz made its way into the clubs of Chicago and New York City, friendly competitions fueled the genre's origins in the city of New Orleans. Joe Oliver, Louis Armstrong, and other musicians in early Dixieland jazz bands began a tradition of engaging in musical duels with other bands that were "fought" on the street. Grab a sweet tea or snowball (shaved ice from a roadside stand) and take a stroll down Royal Street to hear jazz or blues played on nearly every other corner. Only in New Orleans will you find a national park dedicated to jazz. Stop in for a performance at the New Orleans Jazz National Historical Park, with a venue in The Old U.S. Mint building in the French Quarter.

Don't Miss: Robin Barnes, considered the "songbird of New Orleans," suggests Friday-night jazz at Hotel Monteleone, where you can enjoy music with a cocktail while riding a carousel. The Windsor Court Hotel's Polo Club Lounge and The Spotted Cat Music Club are other favorites.

Nothing captures the essence of an American summer getaway like the sound of a wooden roller coaster and the aroma of fried food on a boardwalk. New York's Coney Island is a legendary seaside playground, where a 1918 Ferris wheel and 1927 Cyclone roller coaster still amuse crowds. This June saw the opening of the Thunderbolt, the first major roller coaster built here since the Cyclone. See circus acts and try your luck at Skeeball or other games of chance. Throughout summer, you can catch a free fireworks show every Friday night on the boardwalk. On Monday nights in July and August, movies are screened on the beach as part of the Flicks on the Beach program.

Don't Miss: Nathan's Famous' hot-dog-eating contest is a longtime July 4th tradition that is now broadcast on ESPN2. The annual Mermaid Parade at the end of June attracts hundreds of thousands of mermaids and mermen who pack the streets to showcase their artistic talents through costumes and props.

After watching horses on wet cobblestones struggle to heave a horsecar up San Francisco's steep Jackson Street in 1869, Andrew Smith Hallidie came up with the idea for a steam engine-powered, cable-driven rail system. Four years later, the city's first cable car hit the road. Check out one of the first cable cars in the free Cable Car Museum and see how the underground pulley system works. Or hop on a made-by-hand cable car, each one a national landmark, and ride the same Jackson Street incline up which the horses once trudged. It takes two to manage the brakes, especially on steeper streets, and the public-transit duo working the cables always delivers an entertaining ride after ringing the brass bell.

Don't Miss: Take the Hyde Street line up from Fisherman's Wharf to the top of Lombard Street for a view of the "Crookedest Street in the World." Along the California Street line are Nob Hill, Chinatown, and the Financial District.

The most infamous gunfight in the history of the American Old West put Tombstone, Arizona, on the map in 1881 and on Hollywood's silver screen in 1993's Tombstone, starring Kurt Russell. As the story goes, the shootout at the O.K. Corral that lasted only about 30 seconds pitted outlaw cowboys against town marshal Virgil Earp, his brother Wyatt Earp, and Doc Holliday. Now a National Historic Landmark, the preserved mining boomtown reenacts the shootout daily on the actual site of the O.K. Corral. A narrated trolley tour takes you to other historic landmarks, including Boothill Graveyard, where one of the outlaws is buried. To some, Tombstone feels like a tourist trap, but True West Magazine named it among this year's top 10 best "true Western" towns.

Don't Miss: Belly up to the historic bar at Crystal Palace Saloon, one of the town's first saloons. At Big Nose Kate's Saloon, named after Doc Holliday's girlfriend, you can dress up in period clothes and take photos behind the bar.

If ever there were a case where photographs can't do an American landmark justice, the Grand Canyon is it. Nothing can prepare you for the mind-blowing proportions, and no matter how many times you visit, the views always command a quiet reverence. Enter a remote edge of the canyon by helicopter from Las Vegas to appreciate the vast emptiness of the landscape. At the south rim, hikers can follow the short but strenuous switchback route down to the canyon's snaking Colorado River on the Bright Angel Trail or stay up top and walk the easy Trail of Time along the rim. New as of 2013 is the Canyon Vistas Mule Ride along the east-rim trail, where wranglers stop frequently to share stories and details about the canyon.

Don't Miss: During the park's busy seasons, take the free shuttle to see two of the historic lodges in Grand Canyon Village that turn 100 this year: Hermits Rest and Lookout Studio. In the village, check out the Bright Angel History Room's exhibits. Native American dancers offer free performances outside of Hopi House in summer.

The Beach Boys convinced us that if everybody had an ocean, they'd all be surfing like Californ-i-a. The band captivated a 1960s nation with lyrics and feel-good harmonies that reflected SoCal's freewheeling surf culture, from woodies to bikinis and Huarache sandals, too. The nostalgic vibe lives on at surf breaks throughout Southern California. In the Orange County Register's annual "best of" awards, the Huntington Beach Pier is a perennial favorite. Huntington Beach, dubbed "Surf City USA," is a world-renowned surf destination with 10 miles of sandy beaches, consistent year-round breaks, and more than 50 annual surf competitions.

Don't Miss: Huntington Beach celebrates 100 years of surfing with a lineup of events throughout 2014. The world's largest surf contest takes place on these waves: Vans U.S. Open of Surfing. Huntington Beach is also a great spot for surf style. Quicksilver, Roxy, and Surfline are all headquartered here.

A journey through America's heartland, past storybook towns on the Ohio River or the mighty Mississippi, is a trip back in time. Experience a slice of Americana as you float down the water highways once paddled by the country's earliest explorers. The rhythmic sound of the steam-powered paddlewheel churning water is a daydream-inducing comfort; it's what Mark Twain would've experienced in the mid-1800s as he rolled past the deltas, fjords, and limestone bluffs that inspired his novels about life on the river. As you stop in some of the country's legendary port cities—Memphis, New Orleans, Cincinnati, Louisville, and St. Louis—you'll see and hear how the river shaped American history.

Don't Miss: On the Mississippi River, the American Queen runs themed voyages that highlight various aspects of Americana, from baseball legends to Southern culture. On the Ohio River, the Belle of Louisville is a National Historic Landmark celebrating her 100th birthday in 2014 with a special fireworks cruise in October as well as other events.

Read the original story: 10 Iconic Things You Can Only Do in America by Jamie Moore, who is a regular contributor to SmarterTravel.