Sex tips are awful. If you don't fit a size 9 shoe, you don't need to saw off your toes to ensure a snug fit. Sexual differences are immediately seen as problems in our culture, as we are anxiously terrified of sex. Lists simply perpetuate absurd standards, and for that reason this isn't actually a list of tips, but instead a collections of quotes. These "tips" run contrary to may of the common ideas espoused about sexuality in the media and our culture at-large.

If you are really looking for a better understanding of sexuality, you can start by doing away with the idea that the answer is in a list.

The ideas that follow are meant to challenge you. If you strongly disagree with any of these points, consider reading the book they come from. Dr. Chris Donaghue's "Sex Outside the Lines: Authentic Sexuality in a Sexually Dysfunctional Culture", released earlier this week, provides a great deal of context and research in support of these perspectives, and many others. 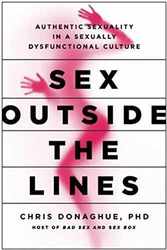 Don't want to buy it? I get that. I like this book so much that I'm giving away 5 copies of it here. And if you don't win instantly through the Amazon giveaway, you can share this article on twitter (or comment below), and be entered to win a second drawing for a free copy of the book! Here is the list:

Advertisement
Advertisement
Readers interested in reading more should note that each quote comes from the corresponding numbered chapter of Sex Outside the Lines. Published with the permission of the author, follow them on Twitter @ChrisDonaghue.