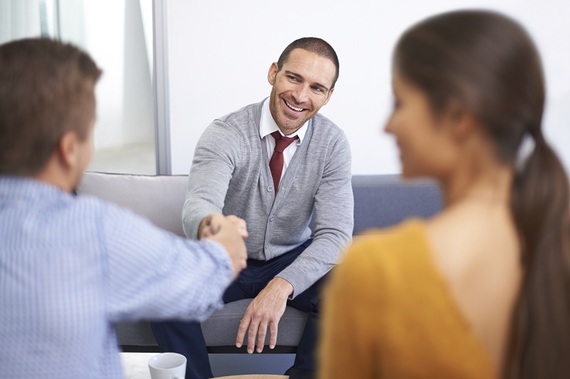 Knowing what to do in an interview -- and what not to do -- can make or break your job hunt. Apart from the more obvious interview mistakes, such as a poor appearance, limp handshake or lack of eye content, some mistakes might not immediately come to mind. Kevin Robson, a London-based recruitment consultant with Capable Consultants Limited, said, "Candidate mistakes can reflect a lack of respect, a lack of desire or both."


Respect during an interview is paramount. "One of my personal favorites was when a candidate came into the office with 'Eye of the Tiger' playing on their smartphone," said Val Matta, vice president of business development at CareerShift. "I understand the intention -- to show excitement about the job ... however, it doesn't really say anything about what kind of employee the young man was going to be."

Here are 10 more interview mistakes you'll want to avoid at all costs.

Mistake No. 1: Arriving Late or Not at All

If you're running late, call and inform the company. If you will be more than 10 minutes late, call and ask if the interviewers would rather reschedule. Kevin Crane, a retired U.S. Special Agent and author of "Access Granted," told GOBankingRates, "The candidate should have called and explained that they were running late and ascertain if it was still OK to come in for the interview. There may have been other candidates lined up for timely interviews already."

According to Crane, never miss an interview and then attempt to call days later to reschedule. "The candidate should have canceled as soon as possible and then rescheduled at that time."

Mistake No. 2: Inadequate Research and Preparation

Adequate research should provide ideas for insightful questions. Common interview mistakes include uninspired questions or no questions at all, which can reflect a lack of interest or initiative.

According to Barry Maher, motivational speaker and author, "One applicant I know went far beyond checking out the company's website and online articles about the company and actually called a number of employees who held the type of position she was applying for as well as several of their managers."

Maher explains that in responding to the interviewer questions, "the candidate was able to show her understanding of the specific issues these employees faced and the ways the company wanted to deal with those issues." Now, that's going above and beyond and will surely help your chances when trying to secure a position.

Mistake No. 3: Criticizing a Former Employer

Negativity of any form in an interview can be construed as bitterness, particularly when it is aimed at a former employer. If you must describe a negative experience such as a lay-off or a conflict, do so by stressing the positive.

Tim Toterhi is an executive coach and author of "The Introvert's Guide to Job Hunting." According to Toterhi, "Instead of venting, take the time to briefly note what you learned, what you accomplished and how this opportunity is the logical progression of your career. If pressed for why similar growth is not available in your current company, stay positive and offer a logical reason such as company size, newness of next level management or your desire to broaden your experience by switching industries."

Mistake No. 4: Stumbling Over Predictable Questions

Some questions are practically guaranteed to come up in an interview and not having a well-rehearsed, well thought-out answer will be disappointing to any interviewer. You need an answer that will either resonate with them or make them remember you.

For example, "Where do you see yourself in five years?" is not inviting the response, "To be married and living in a big house." When asked about your weaknesses, recount a previous experience and explain what you learned. For example, "It taught me that my reaction to a problem is more important than the problem itself."

According to Toterhi, "Sometimes you simply don't have the required experience or a specific skill spelled out in the job description or sought by the interviewer. Instead, demonstrate your integrity by acknowledging the gap ... then note a relevant trait you have that has yet to be explored. For example, maybe your volunteer experience can make up for a shortfall in formal education ... In the end, you both want the role to work."

When describing your achievements, it's natural to use the first person "I." However, using "we" or referring to "the team" can show an interviewer that you encourage growth from other employees and appreciate the contributions of others.

"In a world of self-promoters, it's refreshing to find a candidate who acknowledges the efforts of others," said Toterhi. "That said, it's important not to inadvertently dilute your contributions. Be specific about your role in the accomplishment and detail exactly how you achieved it by noting the situation you faced, the action you took and the results you achieved."

Robson suggests including words such as "colleagues," "support" and "advice" in your responses as well. These keywords can help relay that you're a real team player and respect the support and hard work of those around you.

Mistake No. 6: Failing to Interview the Interviewers

An employer wants to feel certain that you will stay in the job for the long haul. One way to assure the employer that you are the right person is to collect as much information from the interviewers as they do from you so that you can make an informed decision if you receive an offer.

According to Monique Honaman, CEO of ISHR Group, "Candidates make a big mistake when they spend the entire interview selling themselves and no time interviewing the prospective employer. This should be a two-way discussion. We have coached many clients who jumped at a new role only to realize that they did not do their due diligence on the company and found out they didn't 'fit' with the culture."

"If you're in for a minimum of 45 minutes, you're 75 percent of the way there," he said. "Every additional minute implies another 1 percent certainty of good performance, so 46 minutes equals 76 percent and 47 minutes equals 77 percent. The way to extend the interview is to ask questions and build on interview minutes."

Mistake No. 7: Asking About Vacation or Daily Hours

Inquiring about a typical day is acceptable interview etiquette, but asking about typical hours is not. Although a practical question, it can show more of a concern for what the company can do for you rather than what you can offer the company.

"I was involved in an interview recently where the first three questions from the applicant were, in order, 'How much vacation time do I get?', 'How long do I have to be here before I'm eligible for a vacation?' and 'How long before I start to accrue additional weeks of vacation?'" said Maher. "What had looked like a great applicant, now looked like someone who couldn't wait to get out of work."

Maher continued, "The best questions show not just an interest in the job, but an interest in helping the company accomplish its goals. 'What would the perfect employee for this job look like for you?', 'In the best of all possible worlds, what would you like me to accomplish for you in three months? In a year? In five years?" Keep these positive questions in mind for your next interview, and skip asking about hours and vacation time.

Mistake No. 8: Disclosing Your Current Salary

Mark Grimm, a speaker and communications coach, said, "Telling the prospective employer what you make is a mistake for so many reasons. It gives them leverage when you get to salary. It may lead to them thinking less about your skills in circumstances where you were underpaid. It can create an artificial starting point that otherwise would have been higher. Just say, 'That's proprietary information,' if asked."

Some employers insist that you provide a ballpark figure for your desired salary. This gives you the opportunity to avoid a disappointing offer that you would be inclined to refuse by never disclosing your current salary. Give them the salary range you're expecting, not the salary you're making at your current job.

Mistake No. 9: Making Assumptions on Gender

Don't assume an interviewer's gender based on their name. Elle Kaplan is the CEO of LexION Capital Management, one of the only women-owned and run wealth management firms in the nation.

Kaplan said, "I see many make the mistake of assuming I'm a man during phone interviews. Nothing can ruin an interview quicker than hearing someone request 'Mr. Kaplan' or being asked to be transferred to the CEO. Not only does this show a lack of research, but also makes a rude assumption about gender in the industry."

Remember: Do your research, and know your interviewer. "I'd highly recommend all potential employees do their due diligence and avoid assuming anything before stepping into an interview or picking up the phone," is Kaplan's sage advice.

John Hersin is a former Google executive and CEO of the technology recruiting software company Connectifier. He sees candidates who try to redirect questions and seem to give up too easily.

Hersin's advice is: "Don't ever give up. It's becoming more common for candidates to face questions about hypothetical situations or questions that require some analysis to come to an answer. Many people are so fearful of struggling with such questions that they try to redirect the conversation, or they just give up in hopes of moving on to something they are better about."

"If the interviewer asks you something, they often care as much about how you approach the question and that you keep pushing yourself in the face of a challenge," Hersin said. "No employer wants you to give up when things get hard on the job, so don't do that in an interview either."

Keep Reading: 8 Jobs That Will Become Extinct by 2030

This article, 10 Interview Mistakes That Could Cost You Your Next Job, originally appeared on GOBankingRates.com.