I didn't fall in love with Walt Whitman as a teenager. I found his summersaulting sentences and meandering poems too much to get a handle on. His lack of narrative and focus pushed me away. I understood that not all poetry provided narrative, but I preferred Edgar Lee Masters, with his precise eulogies in Spoon River Anthology or e.e. cummings's playful torturing of punctuation and layout or Mary Oliver's crisp images of the emotionally charged natural world.

I never could hear what Whitman wanted me to hear. Perhaps he had too much to say and said it too loud for me to absorb. Perhaps I was too gloomy a teenager and Whitman too proud of humanity's both meager and awesome accomplishments. Perhaps it was his cataloging of archaic words, objects, concepts; perhaps it was his shifting of personas; perhaps it was his twisting lyrical paths that wrapped themselves around the throat of life and death, those pesky but alluring states; perhaps it was those ellipses...

Then, like two kids from the same high school who randomly meet up at a party years later, I began spending time with Whitman and finally connected. The celebratory poetic spirit -- wherein Walt both wanted to be the Great American Poet and also wanted to encourage an entire generation of American Poets -- snapped like lightening along the nerve pathways of my body. Electric? Electric doesn't begin to describe how I began to feel that each line of "Song of Myself" was a poem in and of itself. The narrative I once believed was missing was found lurking there, threading, wrapping, appearing, submerging. It was the narrative of America, not a particular person.

Most importantly, I learned the differences between the first and deathbed editions of Leaves of Grass, and realized the text was a four-dimensional masterpiece, evolving through time and space. It begins as a mass of nearly explosive, nature-infuesed poetry designed to stir the lust for America's very soil and character. It ends up a refined, postured collection aimed at the upper middle class readers Whitman yearned to win over after the Civil War. Sure, he toned down his earthy, musky fetor as the years went by, perhaps becoming shy about the bodily urges he celebrated or seeing something less profound about the body while working the medical tents of the Civil War.

But the core beauty remains.

I began to see Whitman as a new, vibrant character and his poetry wove its way into my mind. Perhaps that makes clear my use of Whitman as the emotional touchstone for James, the depressed and anxious sixteen-year-old of my novel Dr. Bird's Advice for Sad Poets. James is in pain and uses Whitman as a way to smooth out the rough cuts. I didn't read Whitman as medicine when I was a teenager. I read him for my English class and didn't know how to process him. I needed something else to embrace for my own depression.

James and his sister Jorie live in an abusive household, though James receives none of the abuse. Thus, he carries a guilt with him that stands in for physical punishment and it only gets worse when Jorie is kicked out of school for sending a classmate to the hospital; then Jorie is kicked out of the house. Because of all this chaos, and his own guilt, James carries a buzzing anxiety in him that increases the amount of time he spends talking to an imaginary pigeon named Dr. Bird. James is desperate to help his sister especially when he finds something secret and grim hidden in her closet. But how can he help her? He talks to a pigeon. He's falling apart. The novel begins with James doing his best Walt Whitman impression, merging lines from "Song of Myself" with his own variations, just to have the strength to face the day.

James also tries writing poems, taking photos, and hugging trees. I've tried some of these things and not others. What do you embrace to stay afloat? Is it one thing or many? What would Whitman suggest you do?

Be your most authentic self.

Find someone who listens.

Then, sound a barbaric yawp across the roofs of the world. 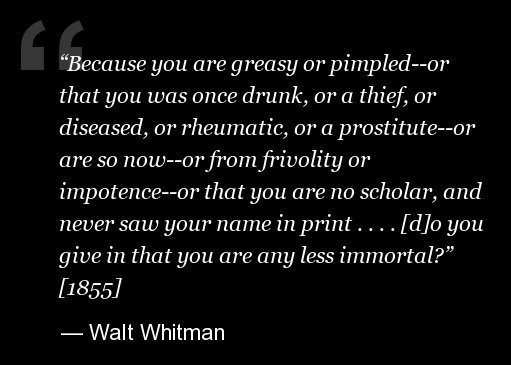 1 / 10
Reject the past’s expectations of you, though do not ignore the value of things that have come before. Reject the tyranny of others; embrace your best self and know that you are part of not only the present but you have a chance to shape the path of yourself and those you embrace.