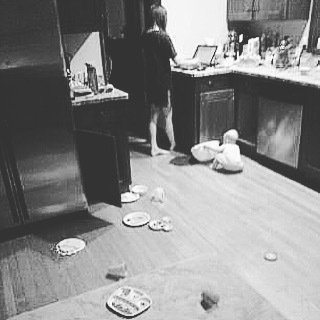 Every mother out there looks back at how she thought she would parent, before she actually became one -- and then laughs her butt off.

The following are lifehacks that all new moms should be taking advantage of, right now, to make their lives not only easier, but exceedingly more enjoyable.

I was one of those anti-television snobs who, for years, didn't even own one after I moved out on my own. My husband-then-boyfriend and I had an argument about finally getting a T.V., and in 2015, my television is still a big, square box. 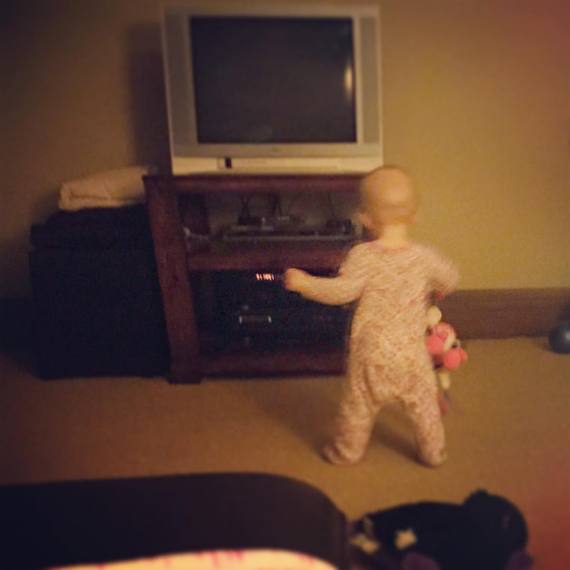 (The above photograph was taken when the baby should have been in bed, but was, instead, parading around playing with all of her sleeping big sister's toys. I captioned it, on Instagram, #gothefucktosleep.)

In other words, I obviously was a mom who swore that my kids would not be T.V. watchers. But they are. Even my 10-month-old baby peers around her big sister's head to see what she's watching.

I'm not saying that we should let our kids watch copious amounts of T.V., or that we should be turning to it as our first solution, but I will say this: T.V. has saved me from yelling at my kids, it's helped me get in a 20-minute workout that made me a better mom for the rest of my day, and it's also helped my daughter learn new words. In short, get off the T.V.-high-horse earlier on than I did.

Change your idea of exercise.

I saw a good workout, before kids, as one that had my full attention and lasted for at least an hour. Now, if I do 20 minutes of Pilates, a few yogic sun salutations or press out a few sets with my free weights, I see my exercise as a success.

I've realized that something is better than nothing, and that it takes only a little bit of movement to get my endorphins going to help me feel better; recharged.

Become okay with doing a little bit every day.

More, when I do make it to the yoga studio for a 75-minute, hot Baptiste-style session, I find that my daily 15 to 20 minutes of yoga practice must be doing the job of keeping me strong and limber, because longer sessions still feel glorious.

If you have the ability to take more time more often than I do, then good for you, but for the rest of the mom population out there, stop making excuses and just move your body for a few minutes each day.

This is likely the most personalized one on this list. Breastfeeding does not work for all moms and each mom out there should always do what works best for her and her family. That said, nearly all of my friends -- myself included, and with both of my children -- had a difficult introduction into nursing. Those first couple of weeks are typically a challenge. However, sticking with it is, in my experience, easier in the long run, at least for those first few weeks and months of motherhood.

Breastfeeding means easy, portable food, no bottle washing or sterilizing, and it's free.

So free the nipple.

Let your house look like Toys "R" Us barfed all over it.

I also swore that I would not be one of those people with kids' toys all over. You should see my house.

Regardless of how often I pick up, it's nearly always littered with a stuffed Olaf from Frozen that's bigger than my baby is, with random Little People, with toy trucks -- and I stopped caring.

Do I sometimes care, when I just picked up Every. Single. Toy, only to turn around from using the bathroom to find that each object has already been dragged back out? A little. But then I look at my smiling kids playing together and acknowledge that I did get to dash to the bathroom alone because the girls were entranced with putting miniature dolls onto a pink, plastic school bus.

I've heard so many new moms say that they don't eat well, or even often, throughout the day because -- and it is -- difficult to do so with small children.

But -- big but here -- eating healthy, unprocessed foods as often as possible makes my body feel better, which, in turn, makes my moods more stable and, basically, just helps me deal with the frustration that often is mothering.

Sure, I sometimes -- okay, usually -- eat faster than I'd like to. Yes, sometimes eating healthy means planning ahead (like how I love to keep a dozen boiled eggs ready to go in the refrigerator). But it's worth it. Especially if we are breastfeeding, our own nutrition counts -- and our self-care sets a healthy example for our children.

At least for the first year. More likely two. If you want to keep your ear lobes attached. 'Nuff said.

Keep random toys and books stashed in the bathroom.

For your soon-to-be frequent bathroom companions. Trust me on this one. Moving on.

Keep the toilet paper out of reach.

I remember the first time I had company over, after I finally admitted that toilet paper holders were for masochists.

At first, I felt embarrassed that the cute little metal contraption connected to the adjoining wall was empty, and that all of our t.p. sat perched in a nice stack, high enough to make it slightly uncomfortable to actually grab when needed. But then I let go of that embarrassment because the rest of my life, when company is not visiting, no longer involves cleaning up chewed up or unrolled toilet tissue.

Now, I'm the first mother out there to admit that I'll do a short yoga practice if I feel like I need a drink.

For one, I don't want to neeeed a drink -- I want to enjoy one when I have it.

That said, every living mother out there will, from time to time, be best served by looking at the clock, seeing that it reads only four p.m., and still go ahead and pour that glass of wine.

The biggest piece of advice that I would love to go back in time and give to my new-mother self five years ago is this: let go of expectations.

By all means, have ideals and goals, but also recognize that our visions of who we will be as a parent are not real.

What is real is the bathroom partner who goes through the phase of pulling off the toilet paper from its holder -- and then eating it.

What is real is turning on the T.V. in the middle of the day so that our oldest child doesn't have to hear the baby scream her head off while falling asleep.

What is real, too, is the love -- and that's waaaaay better than we could have imagined.

Still, even love doesn't always help out when we're exhausted, and dealing with tantrums, and a spouse who is coming home late from work, after the baby had diarrhea all day (made up example).

What does help, though, is loving ourselves enough to stop expecting perfection and, alternately, embrace the reality that it doesn't get more real than motherhood--thank goodness.

More:
ParentslifehacksMotherhoodnew moms
Newsletter Sign Up
Raise the kind of person you'd like to know
Subscribe to our parenting newsletter.
Successfully Subscribed!
Realness delivered to your inbox